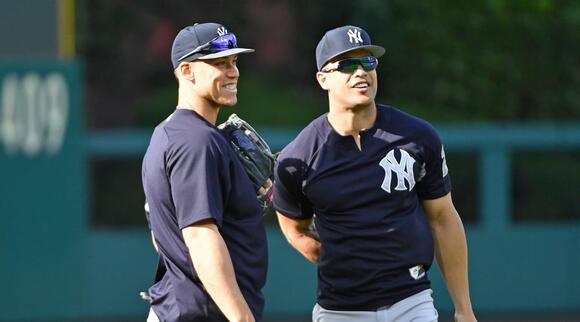 Over the past 21 seasons, the Yankees made the postseason 17 times, but they only won the World Series in 2009. Despite their success, New York won their division once over the past nine years. Their franchise has the most World Series titles (27) by a wide margin (St. Louis Cardinals – 11).

IF Jose Peraza was the only free agent added via a minor league deal in the offseason. The Yankees released OF Clint Frazier, Rougned Odor, and 1B Chirs Gittens. New York lost 1B Anthony Rizzo (unsigned), SP Corey Kluber (TB), Andrew Heaney (LAD), and Brett Gardner (unsigned) to free agency.

Their offense has plenty of power and upside, but all key players need to stay healthy and have productive seasons. 2B Gleyber Torres and 3B DJ LeMahieu finished with stats well below their breakout seasons in 2019.

Aroldis Chapman may not be the answer in the ninth after fading over the final four months in 2021.

Hopefully, the return of SP Luis Severino gives the Yankees their second ace, which would help their quest for a World Series title tremendously. Unfortunately, Gerrit Cole lost some of his luster over the second half of last year after major league baseball cracked down on pitchers using substances to improve their grip and spin rate.

Entering 2020, the Blue Jays and Rays looked ahead of New York in the AL East rankings.

Based on SIscore (-1.87), LeMahieu ranked 115th for hitters, but fantasy managers are drafting as the 70th batter in the early draft season based on his ADP (115). I could see a rebound in batting average with help in runs, but the direction of his swing path restricts his power while having limited RBI chances batting leadoff for New York. At age 33, 100 runs with a .280 BA, 15 home runs, and 75 RBI would be a viable outcome for LeMahieu.

The Yankees have a unique structure to their starting lineup, but they need to squeeze a player who doesn’t strike out at a high rate to bat somewhere between Aaron Judge, Giancarlo Stanton, and Joey Gallo. Torres has the approach to hit second and the previous power to hit third or fourth if he regains his confidence at the plate. I sense that hE will HALT his fading direction and climb off the MATT in 2022. Torres fell one game short of a qualification at second base, but that should come early in the season. His ADP (155) is more than reasonable for his expected rebound. Next step: .290 with 100 runs, 30 home runs, 100 RBI, and some help in steals.

Stanton wondered his way through the first four months of the season (.254 over 303 at-bats with 34 runs, 16 home runs, and 46 RBI), giving fantasy managers buyers remorse. He missed about two weeks in May with a quad issue. Over his final 207 at-bats, Stanton made some ground in his trailing stats (.300/30/19/51). His approach aligned with his career resume while repeating his high contact batting average (.394).

It’s hard to believe Stanton will turn 33 in June. He needs 153 home runs to reach 500 for his career. His ADP (96) ranks him as the 59th hitter drafted, which almost matches his finish in SIscore (1.40 – 58th) last season. More the same while still owning injury risk. Many games at DH give him a better chance to stay on the field.

Gallo is the king of ups and downs in baseball. Last year, he led the American League in walks (111) and strikeouts (213). In between, Gallo smashed 38 home runs with a second straight season with a sub-.200 batting average (.181 and .199). Despite the appearance of disaster at the plate, he did get on base 207 times with the second-highest OPS (.351) of his career.

Gallo is too frustrating to hit higher in the batting order. He is also a challenging player to roster in the fantasy market due to his batting average risk. His ADP (182) falls in a range where a team out of position in home runs will take the plunge. Let’s place his value at .210 with 90 runs, 45 home runs, 90 RBI, and a handful of steals.

After a productive short season in 2020, Voit started the injured list with a left knee issue that required surgery. He also missed time with an oblique issue and a lingering problem with his left knee twice more. Voit finished the season with a spike in his strikeout rate (30.7) and a weaker walk rate (8.7). Over his four seasons with the Yankees, he hit .271 with 167 runs, 68 home runs, and 182 RBI over 987 at-bats.

At age 31, he has a short resume while never having over 430 at-bats in any season in the majors. The combination of his average hit rate (1.824) and contact batting average (.367) supports a neutral batting average with 30 home run upside. His ADP (278) points to a value at the corner position as long as his knee issue is behind him in spring training. With a healthy season, Voit could bat third or fourth in the batting order.

Hicks came out of the gate in 2021 with a .194 batting average over 108 at-bats with 13 runs, four home runs, and 14 RBI. However, he suffered a left wrist injury in mid-May, costing him the remainder of the year.

His bat hasn’t been an edge in his career against either right-handed (.226 BAA) or left-handed (.248 BAA) pitching.

Hicks only has one season of value on his major league resume (2018). If New York doesn’t add another batter, he will be the starting center fielder on opening day. I only see a gap player to cover an injury in deep formats, but Hicks has enough talent over a short-term window.

Sanchez continues to be a black hole in batting average while still owning a home run swing. His average hit rate (2.077) has been elite over the past four seasons, leading to 85 home runs over 1,258 at-bats. He still has a favorable walk rate (11.8) with a rebound closer to his career average (26.5 percent) in his strikeout rate (27.5). Sanchez posted a dismal contact batting average (.298) for the third time since 2017.

Despite his warts, Sanchez is the 16th ranked catcher in the early draft season in the NFBC with an ADP (258). It’s all about the home runs here and many prayers that his batting average regains a pulse—not my kind of dance.

New York should give him playing time at shortstop and third base. Urshela tends to be clutch with runners on base with the skill set to help in batting average. With 480 at-bats, he should produce neutral stats in runs (70), home runs (20), and RBI (70).

When the gate opened for the 2019 season, there was something wrong with Andujar based on his poor at-bats over two weeks (.128 with no home runs, one RBI, and 11 strikeouts over 47 at-bats). He suffered a tear in the labrum in his right shoulder in the third game of the season that needed surgery on May 20th. Over his past three seasons, Andujar saw action in only 78 games (.228/25/7/18 over 263 at-bats).

There was a lot to like about Andujar in his rookie season in 2018. Most will write him off, but he is young enough to regain his previous form. His defense limits him to left field, but his future has a DH-only feel. Viable flier in AL leagues, and fantasy managers need to pay attention to his bat in spring training as Andujar could come quickly if given a starting opportunity.

He’ll turn 28 late in April, but Peraza has only had a starting job twice in his seven seasons in the majors. However, the Yankees tend to find diamonds in the rough, so I could see him surprising if given a bump in playing time.

The crackdown on Spider Tack in mid-June led to regression over his final 16 starts (4.12 ERA and 1.265 WHIP). Over this span, he surrendered 14 home runs (1.4 per nine innings). In August, Cole missed the first two weeks with a Covid-19 issue, plus some time in September with a minor hamstring injury.

Cole has an electric resume over the previous four seasons. He comes off the board as the second pitcher behind Shohei Ohtani with an ADP of 9. The pluses outweighed the questions last season, suggesting another elite season. I expect another year with an ERA under 3.00 with 250+ strikeouts. Cole is one of the best winning games, which creates an edge for fantasy teams.

Three weeks after signing a four-year $40 contract in 2019, the Yankees scratched Severino from his start in spring training. The first report suggested rotator cuff inflammation that required a cortisone shot. By the end of March, he was long tossing giving fantasy owners hope that he would be a value after a massive drop in price point due to his injury. In early April, New York shut him down with a lat strain (second injury). Severino didn’t return to the mound (rehab work) until early August.

His first and only appearance in the minors came on September 1st (two runs and three hits over one inning). New York gave him three starts over the second half of the month, which led to a 1.50 ERA and 17 strikeouts in 12 innings. In the playoffs, he allowed two runs and 14 baserunners over 8.1 innings with 10 strikeouts).

In 2020 in February, Severino blew out his right elbow that led to TJ surgery. Last year his recovery stalled in June, pushing his next appearance to August 3rd. Two appearances later, groin and shoulder issues forced him to miss another six weeks. Severino ended the year with six shutout innings for New York with one walk and eight strikeouts.

Montgomery was up and down over his eight starts, leading to a 4.75 ERA over 41.2 innings. His arm shined over his next 17 starts (2.89 ERA, 1.232 WHIP, and 90 strikeouts over 93.1 innings. In September, a couple of disaster starts (12 runs and 19 baserunners over six innings) led to a disappointing month (5.33 ERA) despite allowing only one run in each of his other four games over 21 innings.

Montgomery threw the most strikes of his career, highlighted by his first-pitch strikeout rate (67). His WHIP and home runs allowed need work to reach an impact level in ERA. More wins should come naturally. He has an attractive ADP (224). I see a sub 3.50 ERA with over 13 wins and 180 strikeouts.

The suspension comes after Harvey testified in the Eric Kay trial that he supplied Tyler Skaggs with opioids while the two were teammates.
BALTIMORE, MD・6 HOURS AGO