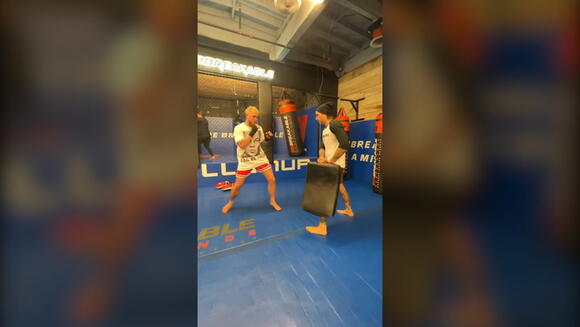 Jake Paul has teased an announcement around a venture into mixed martial arts, while hitting out at UFC president Dana White for his dealings with heavyweight champion Francis Ngannou .

The 24-year-old is now teasing a move into MMA , despite White dismissing a proposal in which Paul offered to fight Jorge Masvidal in the UFC if the promotion’s president agreed to improve base fighter pay and offer healthcare to roster members.

Heavyweight champion Francis Ngannou, who is set to defend his title for the first time next week, has been arguably the most outspoken fighter in the UFC as regards fighter pay, and the French-Cameroonian said on Thursday : “I will not fight for $500,000, $600,000 anymore.”

Paul took Ngannou’s words as an opportunity to criticise White again, writing on Twitter: “Give this man what he wants Dana.

Earlier this month, Paul shared a social media video of himself practising leg kicks . In the post, the American tagged Bellator and the Professional Fighters League – the UFC’s two main rivals in MMA.

One of those promotions could even be the next destination for Ngannou, whose upcoming title defence against interim champion and former teammate Ciryl Gane is believed to be the last or penultimate bout on his UFC contract.

White suggested that Ngannou will have one more fight on his deal if he beats Gane, though the “Predator” has expressed a desire to cross over into boxing to face Tyson Fury .