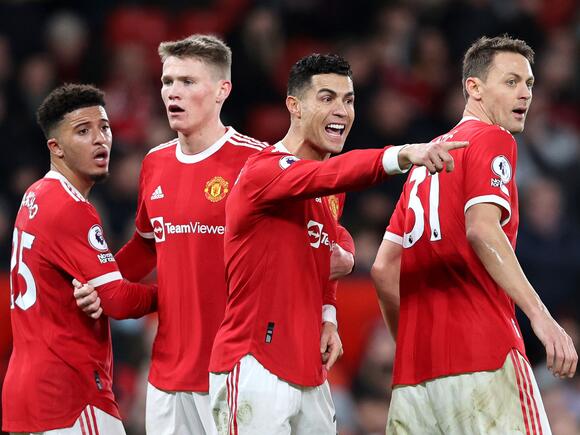 You would think that after signing the Champions League’s all-time leading goalscorer, a four-time winner with Real Madrid and a 21-year-old prodigy who has played in its knockout stages twice already, Manchester United would be well on their way to achieving a top-four finish by now. If only it were so simple.

This season was supposed to see the first serious title challenge at Old Trafford. It has instead resulted in Ole Gunnar Solskjaer’s departure, a bloated and unsettled squad, and the appointment of an interim manager who now has about four months to turn results around and meet the minimum expectation: to qualify for the Champions League.

Last week’s defeat to Wolverhampton Wanderers was Ralf Rangnick’s first but, nevertheless, it has left United in seventh-place, six points adrift of their target and bringing up the rear of a competitive four-horse race. There is little cause for optimism when looking at the league table as it stands, even less when looking at those from previous seasons.

The pass mark for a top-four finish is 76 points. No team has ever taken that many and failed to qualify for the Champions League but there is usually room for manoeuvre. Over the last decade, fourth place has come with an average of 71 points. Go back 20 years to the first time the Premier League had four qualification spots, that average drops slightly to 70.

After 19 games, which is half a season’s worth of fixtures, United are currently on track to finish with 62 points - desperately short of the pass mark and those averages, and short of a standard that a club of United’s size, stature and spending should have no issue reaching. Sixty-two points is typically not even enough to finish in fifth place but sixth.

Only two teams have ever finished with fewer than 62 points and qualified for the Champions League – Liverpool in Gerard Houllier’s final season as manager and David Moyes’s Everton in the following year. That was during the mid-2000s, the last time that the Premier League was dominated by a distinct big three, and a similarity between that era and this season may be United’s saving grace.

For while Manchester City, Liverpool and Chelsea broke away from the pack long ago and have all but sewn up the other three Champions League places, their dominance has contributed to a slow race for the fourth and final spot. None of the contenders are picking up points at a rate above that 70-point average.

All of them have clear weaknesses, all have flaws to exploited, but each also has an advantage that the others do not, making it an imperfect but finely balanced race.

West Ham , for example, have points on the board – 37 to be precise, following their 2-0 win over Norwich on Wednesday night. On the other hand, they have now played at least a game more than their rivals and have no postponed fixtures in hand to be rescheduled further down the line.

If given a choice, you would take the points every time but after 21 games, their projected total of 67 points still comes several points under the average. It would be West Ham’s best-ever Premier League finish, yet since the introduction of four qualifying spots, only four teams have finished with fewer points.

Moyes is one of the few Premier League managers over the past two decades who knows what it takes to duck under the velvet rope and gate-crash the top four, as mentioned, but may have to hope that the greater pedigree of West Ham’s rivals does not tell over the second half of the campaign.

Arsenal have played one game fewer but are also on course for a 67-point finish, courtesy of a genuine upturn in performances that cannot be ignored. Since being thumped away to Liverpool in mid-November, Mikel Arteta’s side sit second in the form table having won five of their eight games and despite losing the other three, they will feel they could have gone unbeaten.

Some of that is down to a favourable schedule with the Leeds and Norwich defences being especially obliging, but unlike earlier in the season, Arsenal have held their own against strong opponents.

The 2-0 victory over West Ham before Christmas was impressive, the 3-2 defeat at Old Trafford could have gone either way and the fragile sense of optimism survived the controversial defeat to Manchester City on New Year’s Day. Even after exiting the FA Cup to Nottingham Forest, the 10-man 0-0 at Anfield in the Carabo Cup semi-final was a stirring response.

There are still valid questions over whether this is sustainable, whether old, flaky habits will return and if Arsenal’s true level is still a good but not very good team, let alone great. But it is hard to deny that there has at least been some improvement over the past month.

If Arsenal have form, Tottenham have the manager and the strongest argument that the second half of their season will be radically different from their first. Whereas Spurs were picking up just 1.5 points per game under Nuno Espirito Santo, since the appointment of Antonio Conte that figure has jumped up to 2.25 – a number more typically associated with title contenders and even title-winning teams.

The difference is stark and puts Tottenham on course for a 70-point finish, right on the fourth-place average. With Conte in the dugout for the remainder of the campaign, that figure should only climb higher. There is an argument to suck some of the air out of this impressive start, though, considering the schedule.

Tottenham have only played one top-half side during Conte’s eight games in charge, a Covid-depleted Liverpool. Trips to Brighton and Leicester were postponed, contributing to the strange fact that Spurs have only played eight away league games this season. Sunday’s north London derby, at home, will be a better test of their credentials and visits to the King Power and Stamford Bridge follow.

United have also benefited from a gentler run of fixtures recently, not that it has done them much good. That may actually be one of the more underplayed but still concerning aspects of Rangnick’s interim spell in charge: that games against Crystal Palace, Norwich, Newcastle, Burnley and Wolves have not inspired a greater level of performance, let alone results.

Their advantage over their rivals is simple: the quality mentioned at the very top, the all-time leading Champions League goalscorer and four-time winner supplementing a squad that will be competing in the knockout stages of that very competition next month. United are the only contender in this race to have competed in the Champions League since the pandemic cut the 2019-20 season short. They have quality and pedigree.

Rangnick’s task is to harness that, shape it and mould it into a collective worthy of the various individuals’ reputations. Saturday’s trip to Villa Park and a rearranged visit to Brentford in midweek could be critical to their top-four chances. United are currently a long way away off the pace that is typically required to qualify for the Champions League, though. Their best hope may be that their competitors are not exactly perfect either.

Carlo Ancelotti does not need reminding about what happened on this day 17 years ago. Thoughts of that wild night in Istanbul in 2005 always resurface for the Real Madrid coach in late May, but those memories are even more urgent because the 62-year-old is preparing for another Champions League final against Liverpool on Saturday in Paris.This will be the third time the Italian has faced the Merseyside club in European football’s showpiece game. That first meeting will forever haunt Ancelotti. His Milan side were 3-0 up at half-time in the Ataturk Stadium but lost on penalties after Liverpool made...
PREMIER LEAGUE・50 MINUTES AGO
The Independent

Emile Smith Rowe has returned to the England Under-21s squad for their crucial Euro 2023 qualifiers.The Arsenal midfielder has dropped back down from the seniors, having last played for the Young Lions in October.Aston Villa striker Cameron Archer, who scored seven goals in 20 appearances on loan at Preston this season, has been handed his first call-up by boss Lee Carsley for the final four qualifiers.Manchester City goalkeeper James Trafford, who has been on loan at Bolton this season, is also included for the first time.The Young Lions are second in Group G, three points behind the Czech Republic with two games in hand.Carsley’s side go to Ceske Budejovice on June 3 for the crunch top-of-the-table game before hosting Albania, travelling to Kosovo and ending with a home game at Huddersfield against Slovenia on June 13.
SPORTS・1 HOUR AGO