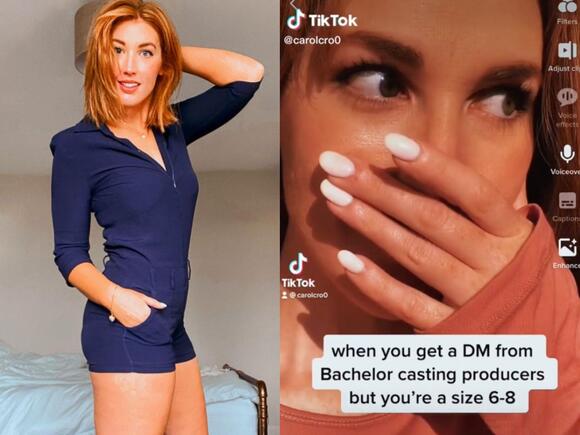 In a video posted earlier this month, the TikTok user Caroline Cronin said she was "ghosted" after "The Bachelor" producers saw what her body looked like during a Zoom audition.

Cronin, whose TikTok bio describes her as an actor, originally posted a video in November, which has since been deleted, about being contacted by producers of the hit reality dating show.

"When you get a DM from Bachelor casting producers but you're a size 6-8," the text overlay on that post read.

In her January 6 video, Cronin said she did eventually meet with casting producers for an audition over Zoom, which involved talking about her dating history and where she was in her life.

At one point during the call, Cronin said in the video, producers had her "stand up over Zoom, like take a step back from my computer and the guy looked at my body."

She was then told someone would get back to her, she said, adding: "They ghosted me like all the other men in my life."

Cronin said in the video that she was originally excited for the opportunity and thought it was "a good thing" that she was contacted "because I'm not the typical beauty standard, I think, for what the show normally presents." She added that, in her view, while the producers had "done a really great job" with "diversifying the cast of contestants" in terms of race, they "never really diversify the body type of the people that are on the show."

She said that since she was scouted on Instagram and didn't "lie" on her profile, she didn't think her size mattered. But after the audition, Cronin said, she got "the feeling" that her body type played a part in why she was rejected from the show.

In a statement to Insider, Cronin said, "I never meant for my video to come across as bitter or upset for not being cast. That's life."

The point of her TikTok, Cronin added in her statement, was "to raise awareness about the lack of body diversity within the franchise, and it required the context of my interview experience to make my points."

She told Insider that as soon as she was asked to stand up for a "full-body shot," her first thought was, "Oh, OK, so I don't stand a chance."

"This isn't how things should be," Cronin added.

This isn't the first time the issue of body diversity has come up regarding "The Bachelor." In 2018, Glamour's Christopher Rosa wrote an op-ed about the issue, saying that while a midsize model was cast in 2015, she was eliminated in the first week.

Rosa's essay also pointed to the former host Chris Harrison's response to The New York Times in 2014 when asked if there would ever be a "chubby" lead on the show.

"No. You know why? Because that's not attractive," Harrison said. "I know that sounds horrible to say, but I know that at 42, in the eyes of television, I'm old and unattractive."

In 2018, Robert Mills, a senior vice president at ABC, addressed the issue in an interview with WUSA9 . He said the show would "absolutely" cast curvy people.

"A lot of it does revolve around who the lead is and who the lead wants to date," Mills added, saying he'd want to avoid casting a diverse body type just to see them "gone the first night."

In an earlier interview with Insider, when asked about Cronin's viral TikTok, the "Bachelorette" star Ali Manno (who said she hadn't seen the TikTok) also reflected on the franchise's lack of body diversity, saying she believed producers should make showing different body types a priority.

Is this really a story? How desperate has our society become. Here ya go…GET USE TO IT SWEETIE! Not the first time and not the last, certainly not news! Get a life! 🙄

the bachelor needs to be ghosted. anyone who watches is just showing their lack of intelligence

Is anyone surprised? This is a tightly scripted show, nothing is left to chance. Just like every other reality show

90 Day Fiancé: Before the 90 Days star Johnny Chao is showing off a new look on social media. The reality TV star rocked a fresh-faced look on the show. However, Chao debuted some new facial hair in his most recent post on Instagram. More specifically, he grew a beard and mustache.
TV & VIDEOS・25 DAYS AGO
Insider

The 2010 carnival-themed promo had a lasting influence on pop culture, but fans may not know that it also helped save "Degrassi" from cancellation.
TV SERIES・1 DAY AGO
Hello Magazine

Princess Eugenie has taken to her Instagram Stories to make an exciting announcement related to The Anti-Slavery Collective, which she co-founded with her best friend Julia de Boinville back in 2017. Resharing a message from the charity organisation, the mother-of-one revealed she was posting "news from my charity". WATCH: Princess...
CELEBRITIES・25 DAYS AGO
The Independent

Laughter erupted in courtroom after Johnny Depp said he doesn’t watch his own movies and couldn’t recall the question he was asked. “I don’t watch them. I feel better not watching them. What was the question again?” Mr Depp said to laughter from the room. Johnny Depp trial – latest updates“Order in the court, or I will have you removed,” Judge Azcarate said. “Understood? Thank you.”The defamation trial between Mr Depp and Amber Heard began on Monday 11 April in Fairfax, Virginia following Mr Depp’s lawsuit against his ex-wife in March 2019. Mr Depp is arguing that she defamed him...
CELEBRITIES・26 DAYS AGO

The Today Show stars, including Hoda Kotb, Savannah Guthrie, and Craig Melvin, are reeling from the death of a beloved fellow Today host, one whose hiring onto the show made history at NBC studios. The co-hosts took a moment out of Monday morning's show to honor the legacy of Jim...
CELEBRITIES・26 DAYS AGO
Hello Magazine

Hoda Kotb took to social media to show her support for her co-star and close friend Jenna Bush Hager as she embarked on a brand new adventure. The Today host shared a snapshot of her co-host's book tour schedule, which took her around the country to talk about her latest release with sister Barbara P. Bush.
CELEBRITIES・27 DAYS AGO
The US Sun

GENERAL Hospital revealed a major character change is coming to the show this week as one of its stars battles health issues. There are often comings and goings happenings on soaps, and the latest cast switch-up involves longtime cast member Nancy Lee Grahn. Nancy, who turns 66 on Thursday, has...
CELEBRITIES・26 DAYS AGO
Hello Magazine

Gwyneth Paltrow is a doting mom to two teenage children, Apple and Moses, who she shares with ex-husband Chris Martin. The family are notoriously private, but over the weekend the award-winning actress gave a rare insight into their upcoming plans - and how they are changing things up this year for Mother's Day.
FAMILY RELATIONSHIPS・25 DAYS AGO

Johnny Depp praised Amber Heard for having “the strength of a thousand men” in a text to her mother, the Heard legal team revealed in court. As proceedings in Mr Depp’s defamation trial against Ms Heard resumed on Monday, her attorney Ben Rottenborn said Mr Depp was going into detox for addiction to pain killers when he spoke to Ms Heard’s mother. Johnny Depp trial – latest updatesOn 19 August 2014, Mr Depp wrote: “my dearest Paige, how unbelievably kind and pure your message was. I am beyond thankful to have you in my life. There’s no luckier man on...
CELEBRITIES・26 DAYS AGO
SheKnows

90 Day Fiancé stars Anna-Marie Campisi and Mursel Mistanoglu have added a little boy to their family! The couple, who tied the knot on Season 7 of the TLC reality show, announced on Instagram this week that their son, Gokhan John, had been born via a surrogate on Monday, April 11 after the couple's initial struggle with fertility.
FAMILY RELATIONSHIPS・25 DAYS AGO
The Independent

Amber Heard appeared to physically react as the psychologist hired by Johnny Depp’s legal team to evaluate her testified that she has two personality disorders. The defamation trial between Mr Depp and Ms Heard began on 11 April in Fairfax, Virginia following Mr Depp’s lawsuit against his ex-wife in March 2019. Mr Depp is arguing that she defamed him in a December 2018 op-ed published in The Washington Post titled “I spoke up against sexual violence — and faced our culture’s wrath. That has to change”.Johnny Depp trial – latest updatesPsychologist Dr Shannon Curry took the stand on Tuesday...
CELEBRITIES・25 DAYS AGO

Kate Hudson has realized one of her dreams and has taken to Instagram to share the incredible news with her 15 million followers. Sharing two pictures of her looking casual in a pair of baggy dip-dyed trousers and a white tank top, and singing into a microphone, the actress announced a surprising career change.
CELEBRITIES・26 DAYS AGO
Newsweek

"We divorced because Jim was a bad husband and not a great dad when we were together," she explained.
RELATIONSHIP ADVICE・25 DAYS AGO
ComicBook

After weeks of silence, Chris Rock has finally addressed his now-infamous incident with Will Smith at March's 94th Annual Academy Awards. During another sold-out show at Baltimore's Lyric Performing Arts Center on Friday, Rock directly referenced the slap, but only spent a second on it before moving on with his set.
BALTIMORE, MD・27 DAYS AGO
hotnewhiphop.com

Mark Hamill has revealed he lost thousands of followers on Twitter in the space of a few hours yesterday (25 April).While the exact reason for the exodus has not been confirmed, his tweet came shortly after it was announced that Elon Musk is set to purchase the social media platform in a deal worth $44bn.Since the news broke, many users of the site (including Jameela Jamil) have announced their intention to delete their accounts, owing to Musk’s reputation as a politically controversial figure. It is believed this could be the reason for Hamill’s loss in followers.“Weird. I just lost...
CELEBRITIES・25 DAYS AGO
People

Paulina Gretzky walked down the aisle in Vera Wang!. The bride shimmered during her wedding with pro golfer Dustin Johnson on Saturday at Tennessee's Blackberry Farm. Gretzky showed off the stunning look on Instagram Monday in a photo of the newlyweds kissing. "4/23/22♥," she simply captioned the post. For...
BEAUTY & FASHION・25 DAYS AGO
Insider

Depp said he discovered Disney would not recast him in "Pirates" days after Amber Heard's Washington Post op-ed article was published.
FAIRFAX, VA・26 DAYS AGO
Us Weekly

The show — and the vacation — must go on. Jada Pinkett Smith determined that the family trip to India wasn't going to be canceled due to Will Smith's Oscars slap. "Will and Jada have taken the family on [a] vacation that was already planned," a source exclusively tells Us Weekly. The Concussion star, 53, […]
CELEBRITIES・27 DAYS AGO