By Angelica Villa
ARTnews
3 days ago 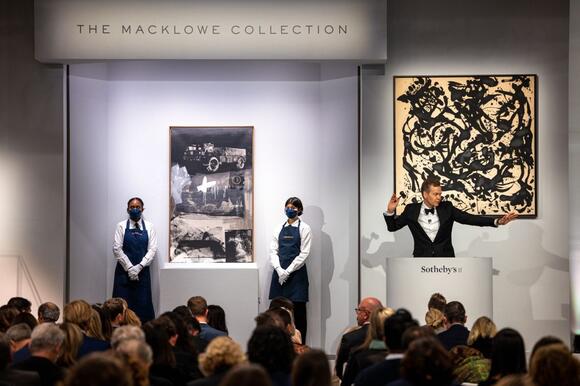 Sotheby’s has enlisted Goldman Sachs and Morgan Stanley to advise on a potential public offering of the company, according to a report published by Bloomberg on Thursday. Owned by telecommunications mogul Patrick Drahi , the auction house could be taken public later this year. It may seek a valuation estimated around $5 billion.

When Drahi purchased Sotheby’s for $3.7 billion in June 2019, the deal took the 277-year-old auction house private. It had been a publicly traded company for three decades prior to that. The owner’s decision to consider an IPO follows a record $7.3 billion year for the auction house, which benefitted from the art market’s bullish post-pandemic recovery. Some $6 billion was generated through auctions, the house said; the remaining $1.3 billion came from private sales.

In the two years since he acquired the house, Drahi’s investment in Sotheby’s seems to have paid off. Drahi, who is known for leveraging debt in major investments, put $1.45 billion of equity toward the 2019 deal to buy the house and borrowed the remaining sum. After a pandemic-fueled period of cost cutting that followed his deal, Drahi went on to pay out $465 million in dividends to shareholders.

Calling the initial deal “opportunistic,” Chris Hughes wrote in the Washington Post that Drahi’s financial maneuvers could be fruitful. “A stake sale could free up capital to deploy elsewhere,” Hughes wrote.

Drahi also owns the U.S. telecommunications company Altice. He recently raised Altice’s stake in the British telecoms company BT from 12.1 percent to 18 percent in December, prompting speculation that he could be mulling a takeover bid of the company. Drahi has denied this.

Phillips has named Jean-Paul Engelen as its Americas President, a newly created role to follow his previous stint as deputy chairman. Since 2015, Engelen has also overseen the contemporary department with his co-head, Robert Manley, and he will continue to do so in his new role, in which he will oversee business strategies across offices and consultancies in the U.S. and South America. In a statement, Phillips CEO Stephen Brooks described Engelen as “instrumental” in recent growth for the house, which saw its highest-grossing evening sale this past November in an auction that brought in $139 million. Brooks attributed part of...
BUSINESS・5 DAYS AGO
ARTnews

Sotheby’s has appointed Jean Qian as its new managing director of China. In her new role, Qian will oversee strategic initiatives in the region and will be responsible for growing Sotheby’s local client base there. She will be based in Shanghai. Qian was previously vice president for the China Asia-Pacific region at the fashion e-commerce company Farfetch. Prior to that, she served in various management consulting roles across the luxury and financial sectors. Alongside its competitors Christie’s and Phillips, Sotheby’s reported a strong year of sales in 2021, helped by an expansion of digital and live-streamed auctions, as well as a growing...
BUSINESS・9 DAYS AGO
ARTnews

An early Roman figure carved from wood was unearthed as part of archaeological research accompanying the construction of a new rail line between London and Birmingham, England. According to a press release from HS2, as the high-speed railway is known, the figure was dug up in July from a ditch whose water-logged and thus oxygen-deprived clay preserved the wood and kept it from rotting. Shards of pottery dating back to sometime between the years 43 C.E. and 70 C.E. were found in the same ditch. The figure stands a little more than two feet tall and measures seven inches in...
SCIENCE・2 DAYS AGO
24/7 Wall St.

Analysts at BTIG have named their top picks in several REIT sectors. Here are the five that currently have the potential to add 20% to their share price this year.
MARKETS・2 DAYS AGO

Morgan Stanley says the correction has already happened for many stocks, so investors don't need to wait for it

Many stocks have already corrected so investors don't need to wait, according to Morgan Stanley's Lisa Shalett. The CIO stated that 85-90% of stocks have corrected, with many about 10 or 20% from 52-week highs. She noted that Big Tech stocks still need to correct 10-15%. Sign up here for...
STOCKS・3 DAYS AGO
MarketWatch

Worried about a bubble? Why you should overweight U.S. equities this year, according to Goldman Sachs

Investors should favor U.S. equities this year even as valuations are historically high and the Federal Reserve moves toward tightening its monetary policy, according to the investment strategy group at Goldman Sachs. “Using valuation as a signal to get out of equities is actually not effective,” said Sharmin Mossavar-Rahmani, chief...
STOCKS・3 DAYS AGO
Seekingalpha.com

Get ahead of the market by subscribing to Seeking Alpha's Stocks to Watch, a preview of key events scheduled for the coming week. The newsletter keeps you informed of the biggest stories set to make headlines, including upcoming IPOs, investor days, earnings reports and conference presentations. To catch up on...
STOCKS・2 DAYS AGO
24/7 Wall St.

Goldman Sachs favors energy and quality utility stocks for this year. These four outstanding Conviction List picks all pay generous dividends, still have some room to run and could very well offer investors shelter from the storm.
STOCKS・3 DAYS AGO

NEW YORK, Jan 13 (Reuters Breakingviews) - The buyout business has come a long way since David Bonderman and James Coulter founded TPG (TPG.O) in 1992. The company, which priced its initial public offering on Wednesday, and peers like Blackstone (BX.N) and Apollo Global Management (APO.N) have seen assets grow tremendously. But a main propellant of private equity – a declining trend in interest rates – has been constant. That is set to change, and TPG needs to change, too.
BUSINESS・4 DAYS AGO
Benzinga

Someone with a lot of money to spend has taken a bullish stance on Morgan Stanley (NYSE:MS). And retail traders should know. We noticed this today when the big position showed up on publicly available options history that we track here at Benzinga. Whether this is an institution or just...
MARKETS・4 DAYS AGO
Benzinga

Morgan Stanley's commodities strategist and head of European oils, Martijn Rats, is out with a note this morning detailing his view of the year ahead for European energy - he remains constructive, with many of the factors contributing to 2021 outperformance driving repeated outperformance in 2022. Starting with the commodity,...
ENERGY INDUSTRY・5 DAYS AGO
Seekingalpha.com

Businesses await green light to get staff back to the office: KPMG, Goldman Sachs, HSBC and JP Morgan braced to bring back workers when WFH advice changes - with some premises just 16% full

Major British firms today insisted they would bring more employees back into the office if the Government's policy on working from home changes, as hospitality bosses called for the guidance to end - with one industry source saying trade was 'as dead as a dodo'. Pubs, bars and restaurants in...
RETAIL・6 DAYS AGO
Seeking Alpha

Goldman Sachs: Strong Prospects In The Face Of Macro Pressure

Goldman Sachs is preparing for a new wave of fintech banking. Goldman Sachs (GS) is one of the most successful investment banks to ever exist. Founded in 1869 by Marcus Goldman, this bank has transformed the financial services industry. Goldman is a dynamic player that is constantly evolving with the state of the market. I believe Goldman is now entering a stage of self-fulfilling earnings growth that they will leverage with their technological and financial advantage. Goldman will remain a safe pick as well as a strong growth play. This coming year will be major for Goldman as a multitude of tailwinds will propel the business to new heights.
BUSINESS・6 DAYS AGO
StreetInsider.com

On CNBC’s “Halftime Report Final Trades,” Joseph Terranova of Virtus Investment Partners said he was “looking for opportunities in quality names” and cited Merck & Co., Inc (NYSE:MRK) as his pick. Terranova added that he had taken a position in Merck on Friday because of...
STOCKS・6 DAYS AGO
Benzinga

Goldman Sachs analyst Eric Sheridan assumed coverage of ZipRecruiter Inc (NYSE:ZIP) with a Buy rating and $35 price target, suggesting a 51.5% upside. The analyst sees ZipRecruiter as a leader in the online recruiting market in the U.S., Canada, and the U.K. The company is using its billions of monthly...
STOCKS・10 DAYS AGO