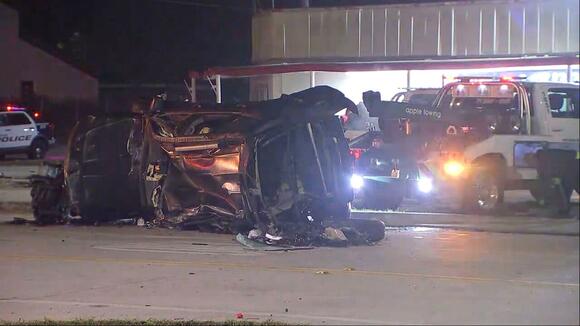 A woman was killed and two children injured when a deputy collided with their vehicle while chasing a robbery suspect. Now, multiple authorities are investigating.

The incident occurred Wednesday night in Houston, after a Harris County Sheriff's deputy picked up a call about a nearby robbery where the suspect had fled the scene, police said.

Once in the area, the deputy saw a man leave a CVS and get into a car matching the description of the one involved in the robbery , according to Houston Police Department Assistant Chief Chandra Hatcher.

"The deputy at that point in time decided to stop the vehicle on a traffic stop. The suspect did not comply and a vehicle pursuit ensued," Hatcher told reporters during a late-night press briefing.

As the deputy entered an intersection with his lights and sirens on traveling eastbound, he collided with a black Kia Borrego traveling northbound, resulting in a "major crash," Hatcher said.

Police are still determining which was the "striking" vehicle, and how fast the deputy was driving, the chief said.

The impact of the collision caused the Kia to roll over and strike two other cars. The deputy's car caught fire and crashed into a nearby parking lot, striking several cars in the lot. Seven cars total were involved in the collision, police said.

The woman driving the Kia was pronounced dead at the scene. She has not been identified pending notification to family members by the Harris County Institute of Forensic Sciences.

Two children in the car were also transported to an area hospital. A 5-year-old boy is in critical condition, while a 2-year-old girl is in stable condition, said police, who have not provided details about the kids' relationship to the driver.

The deputy, who was pulled out of his burning patrol car by several citizens, was also hospitalized and is in stable condition, the sheriff's office said . He has not been identified.

Three people were transported to area hospitals with minor injuries after their cars were struck, Hatcher said.

"Our deepest condolences go out [to] the family of the female that was pronounced deceased at last night's pursuit crash at Laura Koppe & Lockwood," Harris County Sheriff Ed Gonzalez said in a statement. "We pray for the recovery of the injured children and our deputy."

The suspect fled the scene in what authorities believe to be a gray Lincoln Town Car, according to Gonzalez.

Surveillance footage showed that an armed robbery occurred at the CVS, Hatcher said. The sheriff's office is investigating that incident and the first reported robbery.

The Houston Police Department is leading the ongoing investigation into the deadly crash.

The Harris County District Attorney's Office is also investigating the crash, Hatcher said. ABC News has reached out to the office for more information on its investigation.

Authorities commended the citizens who helped rescue the deputy from his burning car.

"We are very thankful that the citizens out here immediately jumped into action to help keep the deputy as safe as possible," Hatcher said.

Gonzalez said he was "very grateful for the heroic actions."

"I ran out here to see what it is and I saw a lot of cars, but I paid attention to the fire," he told the station. "My instincts were to go to that car and help him out, because he was crushed in on both sides."

He said the deputy came to after they brought him inside a store, and they checked his pulse.

"I kept talking to him, 'Stay with us. Help is on the way,'" Walker told KTRK.

Walker believes he was "at the right place at the right time," though said through tears he was disappointed they weren't able to help the woman who died.

According to local reports , Walker, who is homeless, was reunited with his family after they saw him in news reports about the crash.

Prayers for her Children and family. I was hit headon by Texas State TROOPER in Greenville, Texas 2005. The Trooper was chasing a felon at 98 miles an hour. I was seriously injured with life long issues. The bad people need to face stiffer jail time. he was out in 12 days never paid me a dime and he had a long criminal history

Was the end result of a car chase worth the devastation and dead over a robbery? Things in a robbery are replaceable but human life isn't. Lights, sirens and high speed in high traffic areas is a death sentence for the innocent victims. Of course they'll blame it on the victims for not being able to get out of way fast enough to allow a ego driven cop to race down a criminal. 😢🙏💔

As he struggled to survive the 2020 Democratic primary, Joe Biden made a striking pledge before voting began in heavily African American, must-win South Carolina: His first Supreme Court appointment would be a Black woman. On Thursday, with his poll numbers reaching new lows and his party panicking about the...
CONGRESS & COURTS・11 HOURS AGO
NBC News

Justice Stephen Breyer’s anticipated retirement announcement set off the usual frenzied speculation about who will be “the pick.” The reaction perfectly illustrates everything that is wrong with the Supreme Court. Justices seem unlikely candidates to become cultural icons, but the prolific memes and two documentaries about Justice...
CONGRESS & COURTS・14 HOURS AGO
FOXBusiness

Neil Young has a big supporter in his Spotify boycott. Earlier this week, the famed rocker wrote an open letter to the streamer, threatening to remove his music from the platform. He blamed Spotify for spreading false information about COVID-19 vaccines via Joe Rogan's podcast. "They can have Rogan or...
CELEBRITIES・8 HOURS AGO
CNN

(CNN) — A call between US President Joe Biden and Ukrainian President Volodymyr Zelensky on Thursday "did not go well," a senior Ukrainian official told CNN, amid disagreements over the "risk levels" of a Russian attack. The White House, however, disputed the official's account, warning that anonymous sources were...
PRESIDENTIAL ELECTION・8 HOURS AGO

A federal court has rejected a plan to lease millions of acres in the Gulf of Mexico for offshore oil drilling, saying the Biden administration did not adequately take into account its effect ongreenhouse gas emissions
ENERGY INDUSTRY・7 HOURS AGO
The Hill

Senate Majority Leader Charles Schumer (D-N.Y.) is looking to go on offense in the looming Supreme Court fight and shift gears after two high-profile setbacks. Justice Stephen Breyer ’s announcement that he’ll retire this summer, presuming his successor is ready to go, sets up a high-stakes battle for Schumer, who will be the first majority leader to need to get a Supreme Court nominee confirmed in a 50-50 Senate.
CONGRESS & COURTS・29 MINUTES AGO
Fox News

An armed suspect was arrested in Houston on Thursday evening in the shootings of three city police officers, authorities said. The arrest came after the suspect was barricaded in a house and surrounded by police. He surrendered about 7:45 p.m. and was expected to undergo surgery late Thursday for a gunshot wound to his neck, police said.
HOUSTON, TX・13 HOURS AGO
CNN

Moscow (CNN) — The written responses presented by the United States and NATO to Russia's security demands fail to address Moscow's concerns over the eastward expansion of the military alliance, Russia's Foreign Minister said Thursday as fears of a possible invasion of Ukraine remain high. "There is no positive...
U.S. POLITICS・23 HOURS AGO

Who’s who among some possible top Supreme Court contenders

WASHINGTON (AP) — Supreme Court Justice Stephen Breyer’s retirement gives President Joe Biden a chance to make his first nomination to the high court. It’s also a chance for Biden to fulfill a campaign promise to nominate the first Black woman to be a justice. Some things...
CONGRESS & COURTS・18 HOURS AGO
The Associated Press

MOSCOW (AP) — Russia’s top diplomat said Friday that Moscow will not start a war but warned that it wouldn’t allow the West to trample on its security interests amid fears it is planning to invade Ukraine. U.S. President Joe Biden warned Ukraine’s leader a day earlier...
POLITICS・1 HOUR AGO