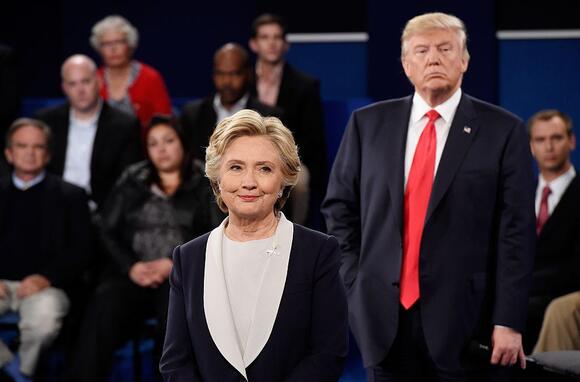 Earlier this week, writers of a Wall Street Journal op-ed resurrected interest in former Secretary of State Hillary Rodham Clinton as a presidential candidate. Back in 2016, Clinton won the popular vote against former President Donald Trump but did not secure enough electoral college votes to win the election.

Since the op-ed was published, there has been a flood of responses, including unlikely ones from Fox News hosts Tucker Carlson and Sean Hannity.

Since neither host appears to be a particular fan of Clinton, it might come as a surprise that both expressed some interest in seeing Clinton run again.

Though, to be fair, Carlson’s reaction to the op-ed was seasoned with considerable sarcasm.

“Typically, when you do something rash or stupid, you have to live with the consequences. It’s probably happened to you, one night, you’re listening to ‘Born to Run,’ after too many drinks. The next thing you know, you’ve got Bruce Springsteen’s face tattooed on your lower back. It's embarrassing. It's also permanent,” Carlson said in an analogy for the country’s recent past. “Think of Hillary Clinton of America’s national tattoo remover.”

“God bless that woman,” Carlson said of Clinton later, shortly before comparing her to “your emotionally volatile niece who goes to art school.”

Carlson then went on to share clips of Clinton, an Illinois native, speaking in a Southern-tinged accent as well as a montage of her laughing.

“Now, when Hillary Clinton, frankly one of the most unlikable people in the world seems like a better option, it's pretty bad,” Hannity said Wednesday . “So, you know, we will see if we get a rematch between Trump and Hillary. That would be interesting.”

According to Schoen and Stein, Clinton is in a good position to become the 2024 Democratic nominee in the wake of frustration with Biden and could even benefit if Democrats lose control of Congress this year.

“It's kind of like the zombie apocalypse, right? She just keeps coming back from the dead,” former National Finance Chair for Senator Ted Cruz, Hal Lambert said while speaking with Audacy’s 97.1 FM Thursday. He thinks she arranged the piece to start up speculation.

So far, Clinton has not officially announced her intention to run. However, she did say last month that she expects Trump, her former opponent, to run again in 2024 .

When President Joe Biden named Kamala Harris as his running mate, he promised his former campaign rival would be one of the most influential voices in the White House.
PRESIDENTIAL ELECTION・20 DAYS AGO
TheWrap

(Note: post has been updated with a response from Sean Hannity and information about baby formula vs. powdered milk for babies.) Fox News’ Sean Hannity shared photos that falsely claimed to show “pallets and pallets” of baby formula at the southern border that were reserved for “illegal immigrants,” which CNN quickly debunked, calling the “Fox and Friends” segment an “illuminating example” in “outrage creation.”
U.S. POLITICS・1 DAY AGO
Daily Mail

Senator Lindsey Graham has said he was wrong to describe Joe Biden as 'the best person' to lead the country after the January 6 insurrection. Graham was recorded speaking to New York Times reporter Jonathan Martin on the day of the riot itself. Martin has written a new book with...
PRESIDENTIAL ELECTION・3 DAYS AGO
WashingtonExaminer

Jen Psaki's final White House press briefing featured tearful goodbyes, a handful of guests, and repeated heckling from a reporter in the room.
POTUS・2 DAYS AGO

Robin Roberts has spoken candidly about why she nearly turned down an opportunity to interview Barack Obama about marriage equality.The Good Morning America host, 61, discussed her 2012 interview with former president Obama during an appearance on The Ellen DeGeneres Show, where she revealed that she had concerns about the interview and her sexuality, as she didn’t want to be “outed” as gay because of the conversation.“In 2012, I got a call to go to the White House, and that there was a possibility that then-president Barack Obama would change his stance on marriage equality,” Roberts recalled to DeGeneres. “I...
CELEBRITIES・20 DAYS AGO
NBC News

MEXICO CITY — Mexican President Andrés Manuel López Obrador on Monday urged U.S. Latinos not to vote in November’s midterm elections for politicians who have “mistreated” them, in response to a comment by former U.S. President Donald Trump. Trump boasted at a rally in...
PRESIDENTIAL ELECTION・20 DAYS AGO
HuffPost

Greg Gutfeld had argued that abortion rights advocates "don't have the balls to state their case plainly."
ENTERTAINMENT・4 DAYS AGO

"Fox News is no longer Fox News," the former president wrote Saturday as he urged CNN to "go Conservative."
POTUS・1 DAY AGO
Newsweek

Representatives Dan Crenshaw and Marjorie Taylor Greene feuded on Twitter after the two Republican members of Congress took different votes on an aid package to Ukraine.On Tuesday, the House passed a $40bn aid package to Ukraine. Every Democrat present voted for the legislation, while 57 Republicans voted against the package, including Ms Greene. Other Republicans who voted against the legislation included Representatives Paul Gosar of Arizona, Matt Gaetz of Florida, Madison Cawthorn of North Carolina and Lauren Boebert of Colorado. But the feud began when Mr Crenshaw, a Texas Republican who lost an eye while serving in Afghanistan, tweeted...
FOREIGN POLICY・4 DAYS AGO
The Atlantic

Last Monday, Malcolm Nance, an MSNBC talking head and former sailor in the United States Navy, showed up on the channel by satellite from Ukraine, dressed to kill. He wielded an assault rifle and wore full-camo military dress, including a ballistic helmet, and U.S. and Ukrainian flag patches. About a month ago, he said, he decided he was “done talking.” He then talked about how he had joined Ukraine’s international legion to help the country “fight [against Russia’s] war of extermination—an existential war.” Others have traced a similar journey. Andy Milburn, a journalist and ex-Marine who stopped writing and began training Ukrainians for combat, wrote an article about how he, too, was finished writing articles about Ukraine. “It just started to seem so frivolous,” he wrote, solemnly. “I didn’t want to be an observer.”
MILITARY・20 DAYS AGO