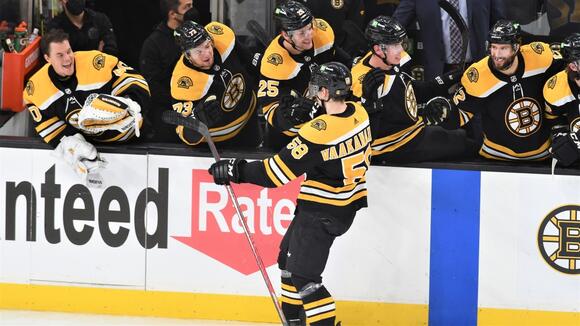 BOSTON (CBS) — A hockey player recording his first career NHL goal is a moment that is remembered forever. Bruins defenseman Urho Vaakanainen will be the rare player who gets to experience it twice.

The 23-year-old scored what appeared to be the first goal of his NHL career on Wednesday night, sending a shot from the top of the right faceoff circle through the legs of teammate Curtis Lazar, off the blocker and back of Montreal netminder Sam Montembeault, and into the Canadiens’ net.

The goal put the Bruins up 5-1 over their longtime rival, but it was a much more significant for Vaakanainen.

It was a major milestone for Vaakanainen, but unfortunately for him, the celebration was cut short.

Less than an hour after the game ended, the NHL made an official scoring change, crediting the goal to Lazar. Replay must have shown that the puck nicked off Lazar’s pants before making its way to the net, thus resulting in the change.

For Vaakanainen, who was the 18th overall pick by Boston in the 2017 draft, it means he’ll have to work to once again record his first goal … for the second time.

BOSTON -- Jayson Tatum has taken another step toward NBA superstardom. The Celtics forward was named to the All-NBA First Team for the first time in his career on Tuesday night.Tatum's play in 2021-22 certainly warranted the honor, as he averaged career-highs with 26.9 points, 8.0 rebounds and 4.4 assists per game during the regular season. Those numbers could have been even better had it not been for a slow shooting start for Tatum, but he really turned it on in the second half of the season when Boston enjoyed most of its success.Over his last 41 regular season games,...
BOSTON, MA・2 DAYS AGO
CBS Boston

Tatum shakes off rough start and shoulder issue in Game 5

BOSTON -- Jayson Tatum had a horrid start to Game 5 of the Eastern Conference Finals against the Heat, and for a while, it looked the Celtics' star may be dealing with a shoulder injury.It's the playoffs, so no one is completely healthy. But Tatum was clearly bothered by his right shoulder in the early goings of Game 5.He grabbed the shoulder early in the game after being bumped by Kyle Lowry, the same shoulder that he suffered a stinger in late in Game 3. He grabbed it again after he was whistled for an offensive foul on a drive...
BOSTON, MA・1 DAY AGO
CBS Boston

BOSTON -- There were points early Game 5 of the Eastern Conference Finals where it looked like Ime Udoka would have to bench Jaylen Brown. The Celtics swingman was that bad to start the game.Then he came out and totally redeemed himself in the second half, leading the Celtics to a 93-80 victory to put Boston one win away from the NBA Finals.To put it lightly, Brown was abysmal to start the game. He had four of Boston's six turnovers and shot just 1-for-4 for three points in the opening quarter. At one point, Udoka subbed him out because Brown...
BOSTON, MA・1 DAY AGO
CBS Boston

Red Sox offense has become a force to be reckoned with

BOSTON -- The Red Sox offense was non-existent to start the season. The dormancy of the Boston bats led to several frustrating nights and a lot of losses in the standings.But the Red Sox offense is now very much awake, and it's a force to be reckoned with. Boston picked up its sixth straight win with a 16-3 drubbing of the White Sox in Chicago on Tuesday night, with the offense absolutely mashing everything it saw.The Red Sox racked up a season-high 19 hits, nine extra-base hits, four homers and 16 runs scored in Tuesday night's victory. They scored all...
BOSTON, MA・1 DAY AGO

BOSTON -- The Eastern Conference Finals is all square heading into Game 5 in Miami. Had the Celtics played to their abilities earlier in the series, they could be looking to clinch a trip to the NBA Finals on Wednesday night. The Celtics have been the superior team for most of the series, but two bad quarters -- really, really bad quarters -- cost them two games. A putrid third quarter in Game 1 and a spiritless start to Game 3 (at home) let both games swing in Miami's favor.Boston battled back to make Game 3 interesting for about five minutes...
BOSTON, MA・1 DAY AGO
CBS Boston

BOSTON -- We're once again playing the waiting game with a pair of Celtics players and their status for Wednesday night's Game 5 against the Miami Heat. Marcus Smart and Robert Williams are both listed as questionable for the playoff tilt.Celtics head coach Ime Udoka said that both players are feeling better after the team's morning shootaround, but they both remain game-time decisions. They'll test out their injuries ahead of tipoff before their status is determined.Smart is still dealing with a right ankle sprain that he suffered in Game 3, which caused him to sit out Monday night's Game 4...
BOSTON, MA・1 DAY AGO
CBS Boston

BOSTON -- Red Sox pitching prospect Josh Winckowski is expected to make his big league debut this weekend. Manager Alex Cora said Wednesday that Winckowski will likely start the second game of Boston's double header with the Baltimore Orioles on Saturday.Winckowski, a 23-year-old righty, was acquired from the Mets in a three-team trade last February that sent Andrew Benintendi to the Kansas City Royals. (Franchy Cordero also came to Boston in the trade.) He is currently the 13th-ranked prospect in the Boston farm system.Added to the Red Sox 40-man roster last November, Winckowski has spent the 2022 season with Triple-A Worcester. He owns a 3.13 ERA and 34 strikeouts to just six walks over 31.2 innings over seven starts. Winckowski split his 2021 season between Double-A Portland and Triple-A Worcester. He made 23 appearances for the two teams, 23 of which were starts, and compiled a 9-4 record with a 3.94 ERA while striking out 101 batters over 112 innings pitched.
BOSTON, MA・1 DAY AGO
CBS Boston

By MATT CARLSON Associated PressCHICAGO - Trevor Story kept up his hot hitting with a three-run homer and four RBIs, and the Boston Red Sox beat the White Sox 16-7 Thursday night to take two of three from Chicago.Story has seven homers and 21 RBIs in his last seven games, raising his season totals to nine homers and 32 RBIs."Controlling my zone has been huge and not missing my pitch when I get it - that's been the key," Story said. "When I get my pitch and take my swing at it, I want the-at-bat to end right there. I've...
BOSTON, MA・6 HOURS AGO

BOSTON -- David Ortiz knows a thing or two about greatness. He has the World Series rings and, soon enough, a plaque in Cooperstown to back him up.When it comes to Celtics star Jayson Tatum, Ortiz sees greatness. Not just Celtics greatness, but NBA greatness.Tatum, 24, took his game to a new level during the regular season and has enjoyed some monster nights during Boston's current playoff run. He led the way with 31 points in Boston's bounce-back win in Game 4 on Monday night, evening the Eastern Conference Finals against the Miami Heat at two games apiece.It was the...
BOSTON, MA・2 DAYS AGO
CBS Boston

CHICAGO  — Jake Burger hit a three-run homer off Rich Hill, Lucas Giolito overcame a shaky first inning and the Chicago White Sox beat the Red Sox 3-1 Wednesday night to end Boston's six-game winning streak.  The White Sox won for the fourth time in six games and moved over .500 to 22-21.Burger, recalled Tuesday from Triple-A Charlotte after Luis Robert was placed on the COVID-19 injured list, hit an 0-2 breaking pitch in the fifth inning that traveled an estimated 444 feet.Giolito (3-1) threw 27 pitches in the first but still allowed fewer than two runs for the fourth...
BOSTON, MA・1 DAY AGO
CBS Boston

BOSTON -- Celtics fans have long known that Jayson Tatum is one of the best young stars in the NBA. A new milestone reached on Wednesday night may help illustrate that reality to the rest of the basketball world.With a 22-point night in the Celtics' Game 5 win over the Heat, Tatum topped 1,500 playoff points for his career, officially getting to 1,508 points in 66 games played.With Tatum being 24 years old and 83 days when reaching that 1,500-point milestone, he became the second-youngest player to ever hit that mark.The only player to reach 1,500 points at a younger...
22 HOURS AGO