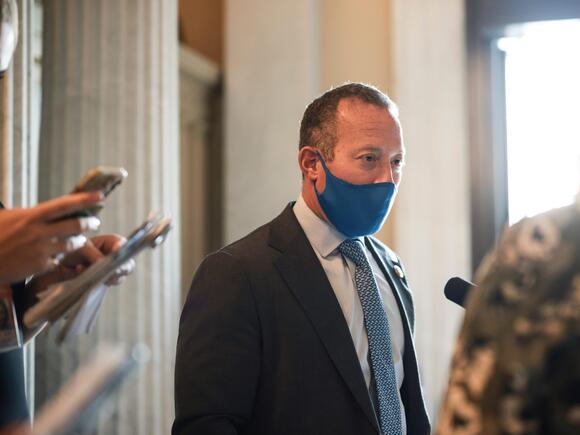 Negotiations around the future of President Joe Biden's Build Back Better legislation is slipping behind closed doors. Resistance from Sen. Joe Manchin of West Virginia has put the package on ice while Democrats make a renewed push to strengthen voting rights .

One part of the sprawling social and climate legislation left unresolved was the rollback of a $10,000 cap on the state and local taxes that taxpayers are able to deduct from their federal bill, known as SALT. Taxpayers used to have unlimited deductions before the new cap was introduced in the 2017 Trump tax law.

A group of Democrats from high-tax states like New Jersey and California added the rollback of the cap into the Build Back Better bill that passed the House in November, and they're vocally standing behind the measure in the face of possible opposition from Manchin.

It's caused angst among many Democrats, given that it hands wealthier households a hefty tax cut. Senate Democrats hadn't settled on a compromise over the SALT deduction yet last month when Manchin came out against the economic plan, slamming it from advancing in the 50-50 Senate with Republicans lined up against it.

The Hill's Alexander Bolton reported earlier this month that Manchin had expressed private skepticism about the measure. It could be why some House Democrats are starting to come out and threaten to oppose the bill once, or if, it  returns to the House for final passage.

"If they're passing Build Back Better legislation, it's got to address SALT," Rep. Mikie Sherrill of New Jersey told Insider on Wednesday, adding that it "remains" her position to oppose the package if it's dropped.

Other House Democrats are also threatening to tank the bill over SALT, including Reps. Josh Gottheimer of New Jersey and Tom Suozzi of New York.

Speaker Nancy Pelosi can only afford three defections because Democrats narrowly control the House. That threadbare majority was a big reason it took the party months to settle fierce disputes about the plan's size and scope and eventually muscle it through the chamber in November without any Republican votes.

The House bill lifted the cap to $80,000 from $10,000, the amount set under the 2017 Republican tax law. But Senate Democrats criticized it since it provided outsized benefits to the wealthiest people, prompting some to map out an alternate plan.

Some Senate proposals that were on the table included restricting the higher cap to individuals and couples earning below $400,000, an approach backed by Sens. Bernie Sanders of Vermont and Michael Bennet of Colorado. Another from Sen. Bob Menendez of New Jersey favored a higher income threshold for singles making $450,000 and couples earning $950,000 or below.

"Talks continue on a path forward on BBB including how to address SALT and other issues," a Senate Democratic aide familiar with the discussions told Insider.

Menendez said in a statement to Insider that "the stakes are too high" for Democrats to ditch rolling back SALT.

"I will also continue to be laser-focused on providing tax relief to working families crushed by Republicans' $10,000 SALT cap deduction," he said. "I am confident we will forge consensus and find a way to continue delivering transformational policies like those we passed last year."

Not everyone who favors the SALT provision was willing to make the same threat as Gottheimer, Suozzi, and Sherrill. "That's never been my position," Rep. Bill Pascrell of New Jersey told Insider on Thursday. "I'm working everyday to bring [that] about as much as possible."

Asked about Sherrill's threat, Pascrell responded: "That's her problem, not mine."

What happen to the big idea that the wealthy were going to pay for all of it? Another Democrat big lie! It's not possible for big business to pay it all and still keep workers and stay in business, profit has to be put back into the business, how about we check into the Democrats who do all that insider stock trading, and always seem to know what stocks are going to go up before they do? Some Dems are worth millions and still draw a big government salary for doing nothing for their district! Nancy Pelosi for one!

it's funny how Dumbocrats blast the rich every election cycle when every single one of those "lawmakers" are wealthy. Nope, nothing to see here. Please fade away.

The left always brag about helping the poor. but, at the end of the day they back the rich. It's all a song and dance for their audience. 💃 🎵 🎶

Greene testified on Friday that she didn't recall whether she asked Trump to invoke military rule, despite telling Meadows to relay the idea to Trump.
ATLANTA, GA・24 DAYS AGO
Business Insider

"We're in a much different part in the world right now with the turmoil that we have," he told Insider. It's a new obstacle for Biden's spending plan.
FOREIGN POLICY・2 DAYS AGO
Business Insider

An attorney for the campaign said they thought they were allowed to use the funds based on a "good faith" understanding of the "highly confusing" rules.
FLORIDA STATE・1 DAY AGO

Click here to read the full article. UPDATED: When America fell asleep watching the election returns last night, Dave McCormick led Dr. Mehmet Oz 31.2% to 31.1% in the race to become the Republican nominee in the election for the Pennsylvania Senate seat being vacated by Pat Toomey. What a difference a day makes. Late today, those results had flipped, with Oz registering 31.2% and McCormick 31.1%. A New York Times tally had the lead at just over 1200 votes. Thousands of votes are outstanding — many of them mail in ballots — and, according to several reports, they could take...
PENNSYLVANIA STATE・19 HOURS AGO
Fox News

In the latest set of text messages between the Fox News host and Trump's former chief of staff, Meadows told Hannity to "Stress every vote matters."
PRESIDENTIAL ELECTION・24 DAYS AGO
Business Insider

Colorado Governor Jared Polis cited the "impacts of inflation and the cost of living" as reasons for the tax rebate program.
COLORADO STATE・24 DAYS AGO
MSNBC

A new Republican-backed law in Florida will repeal Disney’s special tax status, resulting in a property tax increase of up to 25% for residents of Orange County. MSNBC’s Lawrence O’Donnell explains how the move comes as GOP retribution for Disney’s opposition to Florida’s “Don’t Say Gay” bill.April 26, 2022.
FLORIDA STATE・23 DAYS AGO
Business Insider

Harvard polled Americans under 30 who are likely to vote in the midterms and found 85% of them want some government action on student loan debt.
PRESIDENTIAL ELECTION・24 DAYS AGO
USA TODAY

The former president referenced scoring well on a cognitive test in 2018, which is designed to detect whether a person has early stages of dementia.
DELAWARE COUNTY, OH・25 DAYS AGO
Newsweek

Separately, 192 Republicans voted against a bill that would send the FDA $28 million to ensure that future baby formula shortages do not happen again.
OLMSTED FALLS, OH・14 HOURS AGO
Business Insider

An activist group is trying to get Ted Cruz suspended from practicing law, citing his attempts to overturn the 2020 vote to keep Trump in power

Cruz was hit with a 15-page ethics complaint from a group looking to have him "disciplined for his conduct" like Rudy Giuliani was.
PRESIDENTIAL ELECTION・14 HOURS AGO

Musk described himself as a moderate who is "neither Republican nor Democrat," and said his purchase of Twitter wouldn't be a "right-wing takeover."
ELECTIONS・2 DAYS AGO
Business Insider

High-profile candidates endorsed by Trump lost their primaries, showing the limits of his power over the party

Trump is staking his political future on the power of his endorsement, but Republican primary results Tuesday show that it has its limits.
GREENSBURG, PA・1 DAY AGO
Business Insider

The embattled North Carolina Republican closing down the committee could indicate he's looking to step away from politics — at least for the moment.
CONGRESS & COURTS・1 DAY AGO