2 petrol bombs were thrown at Conor McGregor's Dublin pub while he was inside, report says 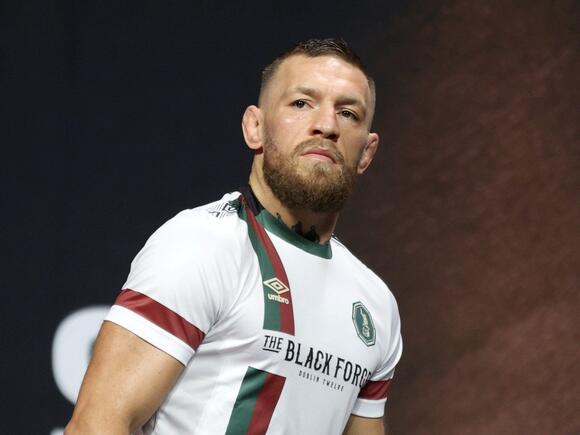 Two petrol bombs were thrown at a pub owned by UFC star Conor McGregor on Wednesday with local police responding to incident.

The Irish Sun's crime journalist Stephen Breen was first to report the incident, and the newspaper added later that two pipe bombs had been found near the pub's rear entrance in a back alley.

Irish police, known as gardai, said no damage was caused at the Black Forge Inn, but are appealing for witnesses to come forward with any information, the publication said .

The incident took place in the Crumlin neighborhood of Dublin, southwest of the Irish capital's city center.

Dublin Live said the attack took place while McGregor was inside, and cited a source who said two men were seen nearby on scooters at the time of the incident.

"There was two people allegedly spotted on scooters who passed the establishment at the time and next thing they were being chased by two others who had come out of the property," the source said.

"McGregor had been holding a taste testing menu in the pub at the same time so the alleged attackers may have assumed he was inside," they added.

Insider contacted the Black Forge Inn for comment on the incident, but had not received a response at the time of publication.

"Gardai are investigating an incident of attempted criminal damage at a licensed premises on the Drimnagh Road, Crumlin last night, Wednesday 12th January 2022," police said in a statement, according to The Mirror .

"No damage was done to the premises," it added.

McGregor bought the property for around $2.75 million in 2019, renovated it, and is regularly seen in the pub.

The youngest victim of a family of four stabbed to death at home in southeast London had moved in just days earlier, it has emerged as a murder suspect remains in hospital.Grandmother Dolet Hill, 64, her partner Denton Burke, 58, daughter Tanysha Ofori-Akuffo, 45, and granddaughter Samantha Drummonds, 27, were all found dead inside the terraced house in Delaford Road, Bermondsey, after officers forced entry at about 1.40am on Monday.It has since emerged Samantha, the daughter of Tanysha, reportedly told a neighbour she was returning to the family home in Bermondsey for a week while she had some work done...
PUBLIC SAFETY・28 DAYS AGO
BBC

A man has been jailed for life for the murder of a mother-of-four whose body was found in undergrowth by a roadside. The body of Helen Anderson, 41, from Finsbury Park in north London, was found beside a slip-road of the A3 near Guildford, Surrey, on 23 August. Dane Messam,...
PUBLIC SAFETY・28 DAYS AGO
Insider

William Gannon said the repeated allegations that he is the street artist Banksy are "undermining" his ability to work.
ENTERTAINMENT・3 HOURS AGO