HYANNIS — The Catholic bishop of Fall River has censured a Hyannis priest for his sermons and commentary against the COVID-19 vaccine.

In a letter read from the pulpit Dec. 5 by the Rev. Michael Fitzpatrick of St. Francis Xavier Church, Bishop Edgar M. da Cunha said he directed Fitzpatrick “to refrain from speaking publicly or in writing on the COVID-19 vaccines, any treatment from the vaccine or any preventative measures to avoid transmission of the virus.”

"Over several months, many have brought to my attention the fact that your pastor, Father Michael Fitzpatrick, frequently speaks out against the COVID-19 vaccine, questioning its efficacy and challenging its moral legitimacy. This has caused confusion and distress, and in some cases may have discouraged some of the faithful from being immunized against the virus,” Fitzpatrick read from da Cunha’s letter.

“Continued progress against the COVID-19 pandemic requires that we all do our part, and for most of us that means getting vaccinated,” da Cunha’s letter said. 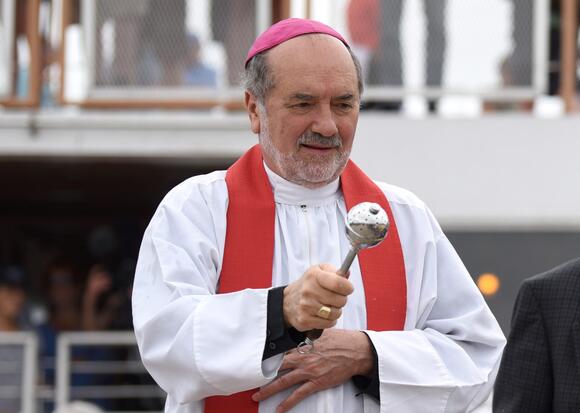 Da Cunha’s support of the vaccine was followed on Monday by Pope Francis’ call for widespread vaccination in all countries and his decrial of “baseless” anti-vaccine sentiment.

“Vaccines are not a magical means of healing,” Francis said. “Yet surely they represent, in addition to other treatments that need to be developed, the most reasonable solution for the prevention of the disease.”

Francis’ statement falls into line with Catholic morality and theology that says the faithful should “favor the greater good and the lesser evil,” said Thomas H. Groome, professor of theology and religious education at Boston College.

Pope Francis: Getting the vaccine, the pontiff says, 'is an act of love.'

“The lack of it has destroyed immeasurable lives.”

Groome said it’s irresponsible “if not downright dangerous to the common good” to try to dissuade people from getting vaccinated against COVID-19.

Questioning the safety of COVID vaccines

According to an article in the New Boston Post by Matt McDonald, over the course of the pandemic Fitzpatrick has questioned the safety of the vaccines in addresses to his congregation, saying that they were too fast tracked to be tested safely, and said alternative medical treatments have been suppressed.

Fitzpatrick, who also has questioned the legitimacy of the November 2020 elections, said the COVID-19 vaccines have been “compromised by using fetal stem cells,” according to the New Boston Post article.

According to an August article on the Nebraska MD website, COVID-19 vaccines do not contain aborted stem cells.

“Fetal cell lines — cells grown in a laboratory based on aborted fetal cells collected generations ago — were used in testing during research and development of the mRNA vaccines and during production of the Johnson & Johnson vaccine ,” the article said.

“By far the greater good now is to avail of the vaccine,” Groome said Wednesday.

He said devout and traditional Catholics will listen to and respect the teachings of Pope Francis, who is speaking on behalf of the church.

Some conservative Catholics have spoken out against Fitzpatrick’s silencing.

Patricia Stebbins, of East Sandwich, in a comment posted on the New Boston Post's website, compared the silencing to bowing to Caesar instead of God.

“My feeling is that we’re all born with God-given free will that entitles us to speak our mind and make calculated informed decisions on our own,” she told the Times Wednesday.

“I fully support Father Fitzpatrick in what he was saying to his parishioners. I believe there are two sides to every issue.”

John Kearns, spokesman for the Diocese of Fall River, said the diocese was not releasing da Cunha’s letter to the public and had no comment on the issue.

Kearns said that since December 2020 the Catholic church has made it clear that receiving the COVID-19 vaccine is “consistent with the Catholic faith and can be done in good conscience.”

This article originally appeared on Cape Cod Times: Anti-vaccine priest in Hyannis is censured by the Catholic bishop of Fall River

WOW!! A priest stands up for what's BEST for him and refuses a substance, the ACTUAL ingredients of which are not disclosed AND is at best 50% effective to be injected into his arm...and he is censored! BUT the priests who were acussed of sexual assaults were at most simply transferred to another parish!!! JUST as this entire Covid mess should NOT be controlled by politics NOR by a religion!!!