'No power whatsoever': Romney warns Dems of 2022 consequences if they change filibuster 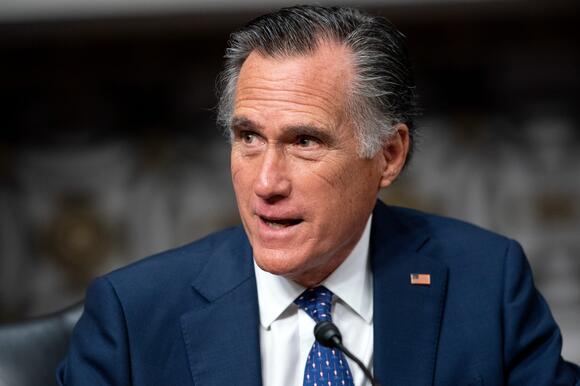 WASHINGTON – Sen. Mitt Romney, R-Utah, warned Democrats of potential consequences if they change the Senate filibuster and the GOP retakes control of both chambers of Congress in the 2022 midterms.

‘This is insane:' Lawmakers relive Jan. 6 horror alongside fresh trauma of effort to rewrite history

The Utah senator was responding to Biden's speech from Georgia on Tuesday when the president argued the future of democracy is at stake and urged Congress to pass two voting rights bills that have stalled in the Senate. Biden also threw his support behind an effort to exempt the measures from a GOP filibuster so they could be put to a vote.

More: Voting rights groups tell Biden they want action, not 'platitudes,' as he travels to Georgia for speech

Senate Democrats have been unable to pass several pieces of legislation focused on voting rights due to the legislative hurdle known as the filibuster, where 60 votes are needed to pass bills. With the upper chamber split evenly 50-50 between the political parties, much of the Democrats' agenda, including voting rights, has stalled.

Senate Majority Leader Chuck Schumer, D-N.Y., has said that if Congress doesn't pass voting rights legislation this week, he will put a vote on the floor to change Senate rules by Martin Luther King Jr. Day next week.

Romney said Tuesday that there is a "reasonable chance Republicans will win both houses in Congress, and that Donald Trump himself could once again be elected president in 2024."

"Have Democrats thought what it would mean for them — for the Democrat minority — to have no power whatsoever?" he continued.

Romney said, "The United States Senate is one of our vital democratic institutions, and the power given to the minority in the Senate and the resulting requirement for political consensus are among the Senate’s defining features."

He called allowing the minority to have power "critical" because then bill passing through the Senate will be aimed to be bipartisan and not "originate from the extreme wing of either [party]."

'Use your soapbox': Activists urge Biden to step up voting rights push as latest bill fails in Senate

He criticized Biden's Tuesday speech where the president said it was Republicans' "endgame" to "turn the will of the voters into a mere suggestion.”

"President Biden goes down the same tragic road taken by President Trump — casting doubt on the reliability of American elections," Romney said. "This is a sad, sad day. I expected more of President Biden, who came into office with the stated goal of bringing the country together."

Romney has been an outspoken force on Capitol Hill against Trump's false claims that the 2020 election was stolen.

He voted to convict Trump not once, but twice, in the Senate impeachment trials, where both charges were related to the election. The first happened in 2020 over Trump's efforts to pressure Ukraine into announcing investigations of political rivals, including then candidate Joe Biden, in exchange for releasing nearly $400 million in congressionally approved military aid.

The second was related to Trump's role in the Jan. 6 insurrection and breach of the U.S. Capitol on the date Congress was counting the electoral votes certifying Biden's win.

'There's a chance I could die here': Here's what 27 members of Congress told us about Jan. 6

Electoral Count Act: What is it, how did it play a role in the 2020 election and Jan. 6, and why are there calls to change it?

Schumer told MSNBC on Wednesday he thought Romney's response was "unbelievably amazing that he would equate Donald Trump and Joe Biden."

In the months after the 2020 election — which saw historic voter turnout amid a global pandemic — disputes over voting rights and election security have become a central debate in statehouses across the country. According to the Brennan Center for Justice , a nonpartisan policy group affiliated with the New York University School of Law, in 2021 at least 19 states passed 34 laws restricting access to voting.

‘A new American fault line’: How new election laws will make it harder for 55 million to vote

This article originally appeared on USA TODAY: 'No power whatsoever': Romney warns Dems of 2022 consequences if they change filibuster

Why does the writer of this article call Jan 6 an “insurrection” when not a single person who was arrested from that day has been charged with it?

Democrats are too blind to look that far forward even though it's only 10 months out where they're going to lose the house and the Senate, then Republicans will be able to do whatever they want without Democrats raising a single fuss about it because they will have killed their only weapon

When President Joe Biden named Kamala Harris as his running mate, he promised his former campaign rival would be one of the most influential voices in the White House.
PRESIDENTIAL ELECTION・29 DAYS AGO
USA TODAY

The Centers for Disease Control and Protection announced in April that the Title 42 would be rescinded on May 23.
LOUISIANA STATE・29 DAYS AGO
Business Insider

"This should never have been allowed to occur to my colleague," Representative Matt Gaetz said about the legal challenge seeking to disqualify Greene.
GEORGIA STATE・29 DAYS AGO
NBC News

MEXICO CITY — Mexican President Andrés Manuel López Obrador on Monday urged U.S. Latinos not to vote in November’s midterm elections for politicians who have “mistreated” them, in response to a comment by former U.S. President Donald Trump. Trump boasted at a rally in...
PRESIDENTIAL ELECTION・28 DAYS AGO
Business Insider

Harvard polled Americans under 30 who are likely to vote in the midterms and found 85% of them want some government action on student loan debt.
PRESIDENTIAL ELECTION・29 DAYS AGO
USA TODAY

Kellyanne Conway writes in her memoir that "democracy will survive, America will survive," but her relationship with George Conway "may not survive."
POTUS・1 DAY AGO

From a first-person perspective, the videos show an anti-tank missile system being fired at Russia armored vehicles seen across a field.
MILITARY・28 DAYS AGO
97.1 FM Talk

In an interview with Russian TV, Sergei Lavrov said that Russia is essentially at war with NATO. This rhetoric has some worried that Russia may use nuclear weapons in Ukraine. Lt. Col. Dakota Wood weighed in on the likelihood of this happening.
POLITICS・28 DAYS AGO
Washington Examiner

Russian President Vladimir Putin on Monday accused Western intelligence services, specifically the CIA, of advising Ukraine on how to assassinate a senior Russian propagandist, Vladimir Solovyov. While Putin said his Federal Security Service disrupted the plot against Solovyov, the evidence for the plot's existence is far from convincing. After all,...
POLITICS・29 DAYS AGO

A dangerous mix of increasing international conflict, global climate change, and a lack of governmental efforts to fix either could be leading the world to an era of unprecedented destruction. That’s the thrust of a new report from Stockholm International Peace Institute (SIPRI), a European think tank focused on peace.
FOOD & DRINKS・15 HOURS AGO
USA TODAY

'Do you guys know how stupid you are?' Congressional staffers field increasingly abusive calls

Rep. Marjorie Taylor Greene (R-GA) speaks to supporters of former U.S. President Donald Trump at the Banks County Dragway on March 26, 2022 in Commerce, Georgia. This event is a part of Trump's Save America Tour around the United States. (Megan Varner/Getty Images) On Monday, CNN's Andrew Kaczynski and Em...
COMMERCE, GA・28 DAYS AGO
Salon

House Republican Leader Kevin McCarthy (R-CA) (Joe Raedle/Getty Images) There was a flurry of headlines last week when news broke that House Minority Leader Kevin McCarthy (R-CA) said out loud that he thought former President Donald Trump should resign in the wake of the deadly Jan. 6 insurrection. The focus was on the fact that McCarthy lied about ever expressing that thought - until, of course, he was confronted with the audio recording of him saying exactly that.
CONGRESS & COURTS・28 DAYS AGO