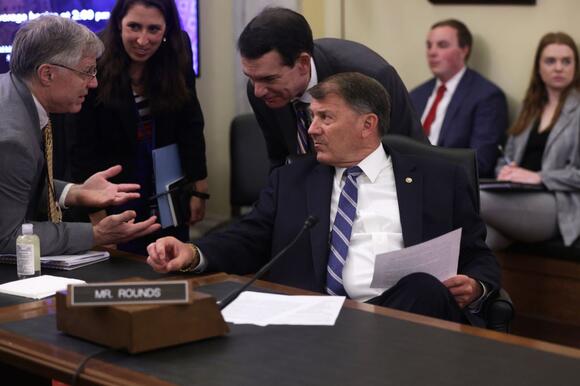 Republican senators rallied to the defence of Sen Mike Rounds this week after he was attacked by former President Donald Trump.

Mr Rounds sparked a feud with the former president when he went on ABC’s This Week on Sunday and reiterated that he did not believe conspiracy theories supported by Mr Trump and his allies about the 2020 election, namely the assertion that Mr Trump had in fact won the election.

"We simply did not win the election, as Republicans, for the presidency,” Mr Rounds said on Sunday.

“[I]f we simply look back and tell our people don't vote because there's cheating going on, then we're going to put ourselves in a huge disadvantage,” said the senator. “[L]et's focus on what it takes to win those elections. We can do that. But we have to let people know that they can -- they can believe and they can have confidence that those elections are fair."

His words were immediately seized upon by Mr Trump, who attacked the South Dakota senator in a press release referring to him as a “RINO”, a “Republican in name only,” an epithet frequently used by conservatives to describe more center-right members of the party.

“The Radical Left Democrats and RINOS, like 'Senator' Mike Rounds, do not make it easy for our Country to succeed. He is a weak and ineffective leader, and I hereby firmly pledge that he will never receive my Endorsement again!" wrote Mr Trump.

On Tuesday, Senate Minority Leader Mitch McConnell, who himself whipped votes against Mr Trump’s objections to the certification of his defeat in early 2021, defended Mr Round in an interview with CNN.

“I think Sen Rounds told the truth about what happened in the 2020 election,” Mr McConnell said. “And I agree with him.”

Other GOP senators were quick to come to Mr Rounds’ defence, a sign that resistance to Mr Trump’s demands for loyalty remains high in the Senate even among Republicans who refused to support the former president’s impeachment after the riot at the Capitol.

"I've always said I agree that the election was not stolen – at least to the degree that it was illegal theft," Sen Kevin Cramer added to CNN. "I've moved on a long time ago, and most members of Congress have, including Mike."

And Sen Shelley Moore Capito of West Virginia quipped that Mr Rounds was “one of the kindest, nicest, most sincere members that we have” in the Senate.

Their comments did not stop Mr Trump from excoriating both Mr Rounds and Mr McConnell during an interview on Wednesday with NPR, which he cut short after being questioned about his falsehoods regarding voter fraud and the 2020 election.

“Rounds is wrong on that. Totally wrong," said the former president on Wednesday, before pivoting to attacking Mr McConnell, who he called a “loser”.

“And frankly, Mitch McConnell, if he were on the other side, and Schumer were put in his position, [Schumer] would have been fighting this like you’ve never seen before,” he added.

Republicans in my area say they won’t vote in next Presidential election. Explaining the party has tilted in a very wrong direction.

It is about time Republicans in Congress start supporting each other. Trump is sucking the integrity and life out of the party. The party doesn't need him to move on. He needs them to continue to push his lies.

RINO'S are not center right. they're republicans that don't do anything but sit around and collect a paycheck. passing nothing and never speak up for the American people.

In the hours after the riot, McConnell spoke briefly about his intentions to quash Trump's influence within the GOP.
CONGRESS & COURTS・29 DAYS AGO
The Independent

Trump laughs at prospect of Pence face-off in 2024 run: ‘That wouldn’t be a problem’

Former president Donald Trump on Thursday appeared unconcerned about the prospect of facing his former Vice President, Mike Pence, in a 2024 presidential primary matchup.Mr Pence has not declared that he will be a candidate for the presidency in 2024, but in a recent interview with The New York Times said he and his wife, Karen, would “go where we are called”. He has also previously said he would not be deterred from a 2024 campaign by the possibility that Mr Trump would enter that race as well.But the twice-impeached ex-president laughed off the possibility of having to campaign...
PRESIDENTIAL ELECTION・20 HOURS AGO
Fox News

EXCLUSIVE: A group of Republican senators is introducing legislation to block the Biden administration from sending personnel and funding from the Department of Veterans Affairs (VA) to alleviate the crisis at the southern border. The senators are alarmed by the Biden administration's announced termination of Title 42 on May 23,...
CONGRESS & COURTS・28 DAYS AGO
Newsweek

"This should never have been allowed to occur to my colleague," Representative Matt Gaetz said about the legal challenge seeking to disqualify Greene.
GEORGIA STATE・29 DAYS AGO
The Independent

Vladimir Putin is so popular in Russia that he has the “political space” to withdraw his forces from Ukraine, said Boris Johnson.The prime minister said the Russian president still has “massive backing” from his own people despite international outrage over the invasion.“The Russian public overwhelming back Putin,” Mr Johnson told Talk TV. “Therefore he has the political margin for manoeuvre from within Russia … Putin has far more political space to back down, to withdraw.”The PM added: “There could come a point when he could say to the Russian people, ‘The military-technical operation that we launched in Ukraine has...
POLITICS・28 DAYS AGO

Russia’s president Vladimir Putin apparently survived an assassination attempt at the start of his invasion of Ukraine, the head of Kyiv’s military intelligence service has claimed.“There was an attempt to assassinate Putin… He was even attacked, it is said, by representatives of the Caucasus, not so long ago. This is non-public information. [It was an] Absolutely unsuccessful attempt, but it really happened… It was about 2 months ago,” Kyrylo Budanov claimed in an interview with Ukrainska Pravda.Meanwhile, in an address to world leaders at the World Economic Forum in Davos, Ukraine’s president Volodymyr Zelensky warned that Russia’s ongoing invasion...
POLITICS・1 DAY AGO
People

"I'm very excited to finally tell my story," Kellyanne Conway said Monday during an interview with PEOPLE before the release of her memoir, Here's the Deal, out now. That story begins in a small town in southern New Jersey and follows Conway to Washington D.C., where a hard-earned career as a pollster and political consultant led to historic achievement as the first woman to run a successful presidential campaign when she helped elect Donald Trump in 2016 and served in his White House as senior counselor to the president.
RELATIONSHIPS・22 HOURS AGO
americanmilitarynews.com

Harvard polled Americans under 30 who are likely to vote in the midterms and found 85% of them want some government action on student loan debt.
PRESIDENTIAL ELECTION・29 DAYS AGO
The Independent

The west could have prevented Russia’s full-scale invasion of Ukraine by taking tougher actions against the Kremlin following its annexation of Crimea in 2014, Volodymyr Zelensky has told world leadersSpeaking at the annual World Economic Forum at Davos on Monday, the Ukrainian president tempered his gratitude towards countries involved in recent sanctions against individuals and firms close to the Putin regime.Many lives would have been saved if the west had imposed sanctions against Russia last autumn, when Moscow massed tens of thousands of troops at the Ukrainian border, he said.The Ukrainian president added that even this step would have been...
POLITICS・1 DAY AGO