Netflix's 13 biggest TV shows of all time, including 'Bridgerton' and 'Ozark' 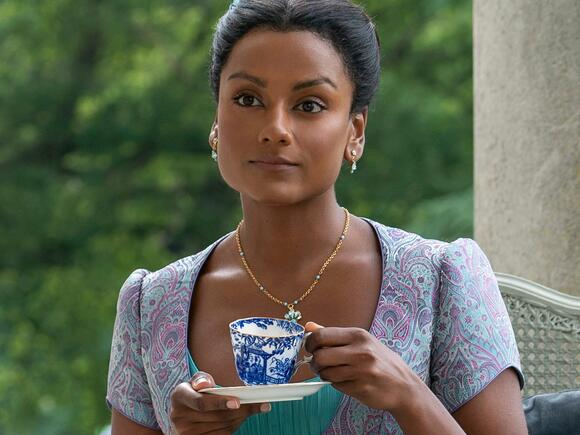 Description : "High school student Clay Jensen lands in the center of a series of heartbreaking mysteries set in motion by a friend's tragic suicide."

Description : "A financial adviser drags his family from Chicago to the Missouri Ozarks, where he must launder $500 million in five years to appease a drug boss."

What critics said : "A chilly, thrilling narco saga told from the perspective of the Mob's money launderer, Ozark deserves its place among the very finest TV takes on American dope, crime and corruption." — Empire

Description : "Geralt of Rivia, a mutated monster-hunter for hire, journeys toward his destiny in a turbulent world where people often prove more wicked than beasts."

What critics said : "In the most pleasant surprise of all, the series feels more emotionally effective than it ever has before." — Hollywood Reporter

Description : "High school student Clay Jensen lands in the center of a series of heartbreaking mysteries set in motion by a friend's tragic suicide."

What critics said : "'13 Reasons Why' is not fundamentally interested in starting a conversation. It's interested in shocking, and it does not care how cheaply it might go about creating that shock." — Vox

Description : "Audacious entrepreneur or con artist? A reporter digs into how Anna Delvey convinced New York's elite she was a German heiress. Based on a true story."

What critics said : "The show certainly provides indulgence (if maybe not enough for my taste). Its failure is in the framing of Delvey's story: It's depicted as a quasi-feminist, girlboss-adjacent revenge fantasy." — Vox

Description : "Geralt of Rivia, a mutated monster-hunter for hire, journeys toward his destiny in a turbulent world where people often prove more wicked than beasts."

What critics said : "In contrast to its halfhearted approach to exposition, the series finds its footing in the graphic depiction of violence." — Slant Magazine

Description : "Bored with being the Lord of Hell, the devil relocates to Los Angeles, where he opens a nightclub and forms a connection with a homicide detective."

What critics said : "This second half feels stronger than the first, in part because it does what Lucifer does best." — IGN

Description : "A high school becomes ground zero for a zombie virus outbreak. Trapped students must fight their way out — or turn into one of the rabid infected."

What critics said : "Even while some things go a bit too predictably, the last two episodes tie everything and everyone together in spectacular, emotional fashion." — Dallas Morning News

Description : "Eight thieves take hostages and lock themselves in the Royal Mint of Spain as a criminal mastermind manipulates the police to carry out his plan."

What critics said : "We love to see talented people overcome the odds and perform the impossible, even if in this case, they're ripping off the mint and printing stolen money. With Money Heist, we're offered a pleasure-driven, rollicking, charming mix of all of the above." — Globe and Mail

What critics said : "This sophomore run is simply not as effusive a watch ... That said, many of the series pleasures still remain intact." — Rolling Stone

Description : "Hundreds of cash-strapped players accept a strange invitation to compete in children's games. Inside, a tempting prize awaits — with deadly high stakes."

What critics said : "Its messages hit like a sledgehammer to the head, yet this vibrant, vicious series holds a surprisingly big heart at its core. A winning blend of spectacle and sentiment." — Empire Magazine

This post has been updated with the most recent data from Netflix.

The long-awaited final episodes of Netflix’s crime drama Ozark, which debuted on the streamer a few weeks ago now, definitely produced one of the most divisive TV endings in recent memory. I was pretty unimpressed with the show’s ending (*spoilers ahead*, so stop right here if you’re not caught up) which sees the Byrdes pretty much get away with everything. Oh, and Ruth Langmore dies, gunned down by Camila Navarro, the sister of cartel leader Omar Navarro.
TV SERIES・16 DAYS AGO
Outsider.com

Netflix streamed the “Ozark” season finale on Friday, April 29th, and ahead of its conclusion, the hit drama remained No. 1 among the platform’s Top 10. However, just weeks following the series’ conclusion, a brand new Netflix original show has replaced “Ozark” in the Top 10, officially knocking it from its top spot.
TV SERIES・10 DAYS AGO
ScreenCrush

10 Flops That Are Huge Hits on Netflix

So far in 2022, Netflix has released more than 50 original movies — an average of about three new features every single week. And yet if you peruse the company’s data website, where you can see the top ten movies and shows in every single country around the world where Netflix is offered, you’ll see that despite all those new titles made expressly for the company and its customers, the most popular movies on Netflix right now by and large aren’t originals.
TV & VIDEOS・15 DAYS AGO
BGR.com

Fresh on the heels of word that Netflix is about to lose the rights to one of the most beloved TV comedies in recent years (Schitt’s Creek), another major title is leaving Netflix soon: Downton Abbey. All six seasons of the beloved upstairs-downstairs British drama are set to roll...
TV SERIES・24 DAYS AGO

Ryan Reynolds accidentally gave Denzel Washington two black eyes during the filming of "Safe House." He said he was extremely embarrassed.
CELEBRITIES・3 DAYS AGO
The US Sun

RAY Liotta, the brilliant actor who made his name in Martin Scorsese's crime classic Goodfellas, has passed away. The star died in his sleep in the Dominican Republic, where he was filming Dangerous Waters, according to Deadline. There were no signs of foul play or anything suspicious about the death,...
CELEBRITIES・14 HOURS AGO
IndieWire

Click here to read the full article. 1. “Stranger Things” Season 4, Volume 1 (available May 27) Best Reason to Watch: Summer is the season for blockbusters, and “Stranger Things” is TV’s biggest blockbuster — at least, until HBO’s “House of the Dragon” and Amazon Prime’s “Lord of the Rings” premiere at summer’s end. Even with those gargantuan franchises in the offing, the Duffer Brothers aren’t giving up the title of TV’s top popcorn program without a fight. Season 4 is being split into two volumes, with four or five episodes premiering May 27 and the remaining entries debuting July 1....
TV SERIES・18 DAYS AGO
IndieWire

Click here to read the full article. The wait for more “Stranger Things” is almost over, with the first portion of the Netflix show’s highly anticipated fourth season dropping next Friday. Much has been made of Netflix’s decision to split “Stranger Things 4” into two volumes, with one batch of episodes streaming on May 27 and more being released on July 1. But until now, little was known about how the streamer planned to split up the season. Volume 1 will contain Episodes 1 through 7, with Volume 2 finishing the story with Episodes 8 and 9. Netflix recently revealed that episodes...
TV SERIES・6 DAYS AGO

Click here to read the full article. Paramount is moving one of its upcoming Yellowstone spinoffs from its streaming service to linear. 6666, from Taylor Sheridan, is moving to Paramount Network, having originally been announced as a Paramount+ original. Paramount sources said that as it produces and develops these series, it is regularly thinking about how to maximise the release strategy and being nimble is key. The series takes place when Comanches still ruled West Texas and no ranch in America is more steeped in the history of the West than the 6666. Still operating as it did two centuries before, and encompassing...
TV SERIES・8 DAYS AGO
Cinemablend

What movies and TV are trending on the Netflix Top 10 for Tuesday, May 24, 2022?
TV SHOWS・2 DAYS AGO
TechRadar

7 new movies and TV shows on Netflix, Prime Video, HBO Max and more this weekend (May 20)

We never thought we’d say this, but it’s high time for a new Disney remake. Both Aladdin and The Lion King were released almost three years ago now, and while the live-action re-telling of Mulan hit Disney Plus in 2020, its release was so severely blighted by the global pandemic that you’d be forgiven for missing it entirely.
TV SHOWS・6 DAYS AGO
ComicBook

Norman Reedus is a man on a mission. Riding solo after longtime co-star Melissa McBride dropped out of The Walking Dead's Daryl-Carol spinoff, Reedus returns as Daryl Dixon in the sequel series taking the lone zombie apocalypse survivor in a new direction: Europe. The untitled spinoff, which will take place and film overseas this summer with ER alum and showrunner David Zabel, could reunite Reedus with "lost" characters who went missing from the Walking Dead Universe. Speaking to Iron & Air for his debut novel, The Ravaged, Reedus teased why Daryl travels to Europe after The Walking Dead ends this fall on AMC:
TV SERIES・7 DAYS AGO

Lucasfilm revealed the release schedule for all the main Star Wars series currently in production, including Season 3 of The Mandalorian, Rosario Dawson's Ahsoka Tano series, and Rogue One’s prequel series Andor. The release windows for all series were revealed by Vanity Fair. The next Star Wars show to...
TV SERIES・9 DAYS AGO
Cinemablend

Jurassic World: 6 Thoughts I Had While Rewatching The Chris Pratt Movie

I have a lot of thoughts about Jurassic World that are good, bad, and overly sentimental.
MOVIES・3 DAYS AGO
CNET

Predator prequel Prey got its first trailer on Monday, hinting at the movie's historical sci-fi action. It comes straight to streaming on Aug. 5, landing on Hulu in the US and Disney Plus Star in other regions. It's set in the year 1719 and follows Naru (Amber Midthunder), a young...
MOVIES・10 DAYS AGO
Collider

‘Jurassic World Dominion’: Come Face to Face With the Giganotosaurus at a New Interactive Billboard in London

Jurassic World Dominion has launched an interactive billboard in London that allows fans to be chased by a bloodthirsty pre-historic beast. As revealed by Fandom on Twitter, the billboard features a Giganotosaurus, one of the many predatory species that’ll hunt Owen Grady (Chris Pratt) and his team of dino lovers in the highly-anticipated threequel.
WORLD・1 DAY AGO
USA TODAY Sports Media Group

Disney+'s streaming library just grew with the addition of a forgotten and entirely unexpected title. Disney+ added The Finder, Fox's short-lived Bones spinoff. The series was quietly added to the streaming lineup on May 20 alongside the J.J. Abrams-created series Alias and the sitcom 8 Simple Rules, which ran from 2002 to 2005 on ABC.
TV SERIES・3 DAYS AGO
CNET

As Obi-Wan Kenobi kicks off early on Disney Plus, we have a couple more dates to look forward to thanks to Star Wars Celebration Anaheim. The show revealed the release date for Andor, a 12-episode series starring Diego Luna reprising his role from 2016's Rogue One. The first episode is slated to hit Disney Plus Aug. 31.
TV SHOWS・2 HOURS AGO
TVLine

Click here to read the full article. Speed Racer is making its way back to TV screens. A live-action series based on the Japanese manga and animated show has received a series order at Apple TV+, per The Hollywood Reporter. J.J. Abrams will executive-produce via his Bad Robot banner, while Hiram Martinez (Snowpiercer, Get Shorty) and Ron Fitzgerald (Perry Mason, Westworld) serve as co-writers and showrunners. Previous English adaptations include the anime series Speed Racer X, which aired in 2002 on Nickelodeon, and a 2008 live-action film starring Emile Hirsch, directed by the Wachowskis. Ready for some more recent newsy nuggets? Well… * Cobra...
TV SERIES・1 DAY AGO