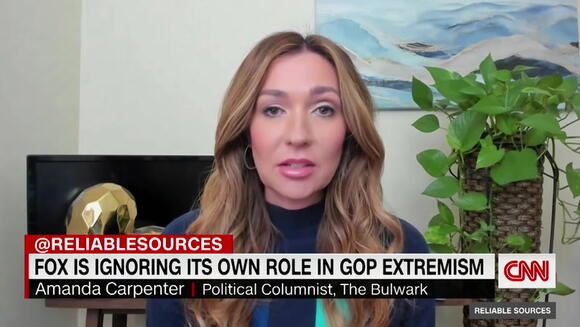 A former aide to senator Ted Cruz said the worst part of his widely criticised appearance on Fox News host Tucker Carlson 's show was not his “abject humiliation” but his clear radicalisation.

Amanda Carpenter, who formerly served as Mr Cruz’s communications director, penned an op-ed published on Monday in The Bulwark, a conservative website, arguing that her former employer had been radicalised and that this became apparent when he apologised to Mr Carlson for calling the Capitol riot a “violent terrorist attack.”

She wrote that while she understood “the urge to dunk on Cruz,” that “what happened on Carlson’s show is more than just an example of Cruz’s weaselly pleading being worthy of a laugh. It's ultimately not funny at all."

Ms Carpenter went on to claim that Mr Cruz at one time “cared about justice and truth,” and that he formerly believed that “violence was violence and that the rule of law (and the rules of language) should be equally applied.”

She claimed this was “no longer the case” for Mr Cruz, calling his participation in rallies preceding the Capitol riot and his mea culpa on Mr Carlson's show “far beyond pandering.”

“Cruz’s humiliation is hardly the point. His radicalisation is far more frightening,” she wrote.

During Mr Cruz’s appearance on Mr Carlson’s show on 6 January, he apologised to the Fox News host for his comments condemning the Capitol riot attacks.

“You called this a terror attack when by no definition was it a terror attack,” Mr Carlson said during the show. “That’s a lie. You told that lie on purpose and I’m wondering why you did.”

Mr Cruz, rather than defending himself, buckled to the pundit.

“The way I phrased things yesterday, it was sloppy and it was frankly dumb,” Mr Cruz said.

He claimed that he had misspoken, though he has in the past also condemned the attacks. In December, Mr Cruz had told the Associated Press that “we saw a terrorist attack on the Capitol” on 6 January 2021.

Mr Cruz has been accused of flip-flopping on his stance on the Capitol riot.

Beyond his mea culpa on Mr Carlson’s show, Mr Cruz was also an early adopter of 2020 election fraud conspiracy theories and led the Senate Republican’s attempts to block the electoral college votes on 6 January.

“It is your self serving attempt at sedition that has helped to inspire these terrorists and their attempted coup,” Democrat Beto O'Rourke, who ran against Mr Cruz for his Senate seat, said shortly after the Texas Republican condemned the violence.

The exchange on Mr Carlson’s show was another example of how Fox News personalities have a significant influence over Republican lawmakers.

“Can he make a statement?… Ask people to leave the Capitol?” Mr Hannity asked in a text.

Ms Ingraham sent a text to Mr Meadows telling him “the president needs to tell people in the Capitol to go home... He is destroying his legacy.”

Further, House revelations found that Mr Trump’s former White House chief of staff John Kelly told staffers to watch Fox News so they could better anticipate what the president would do.

What happened on January 6 was horrible and as an independent in my opinion to me it appeared staged. The capital police and probably FBI agents working in sync with the Democrats looked like they encouraged what was happening all because of their fierce hatred towards Trump. I’m not a Trump fan but I certainly loved his policies. He handled the situation poorly. Let’s not forget what happened throughout the Summer with BLM & Antifa worse then Jan 6 & MSM dismissed all of it.

Greene testified on Friday that she didn't recall whether she asked Trump to invoke military rule, despite telling Meadows to relay the idea to Trump.
ATLANTA, GA・29 DAYS AGO
Fox News

EXCLUSIVE: A group of Republican senators is introducing legislation to block the Biden administration from sending personnel and funding from the Department of Veterans Affairs (VA) to alleviate the crisis at the southern border. The senators are alarmed by the Biden administration's announced termination of Title 42 on May 23,...
CONGRESS & COURTS・29 DAYS AGO

As Ted Cruz faces criticism for his response to the mass shooting that left 19 children and 2 adults dead in Uvalde, Texas, a video has re-emerged showing the Republican senator frying and eating bacon on the same type of gun apparently used by the shooter.In the 2015 clip, which was released while he was running for president, Mr Cruz smirkingly introduces a method for cooking breakfast: wrapping strips of bacon around the muzzle of an AR-15 assault-style rifle and “cooking” it with the heat of gunfire.“Mmmm,” he says, eating the results, “machine-gun bacon.”It has been reported that two...
UVALDE, TX・5 HOURS AGO
WashingtonExaminer

Former Trump lawyer Michael Cohen threw his former boss under the bus on Monday, appearing to contradict claims that the former president does not possess the documents New York Attorney General Letitia James is after.
POTUS・28 DAYS AGO

Robin Roberts has spoken candidly about why she nearly turned down an opportunity to interview Barack Obama about marriage equality.The Good Morning America host, 61, discussed her 2012 interview with former president Obama during an appearance on The Ellen DeGeneres Show, where she revealed that she had concerns about the interview and her sexuality, as she didn’t want to be “outed” as gay because of the conversation.“In 2012, I got a call to go to the White House, and that there was a possibility that then-president Barack Obama would change his stance on marriage equality,” Roberts recalled to DeGeneres. “I...
CELEBRITIES・29 DAYS AGO
The Independent

Key primaries in several US states today saw high-profile Republican candidates facing off against each other and in some cases trying to triumph over rivals endorsed by Donald Trump.In Georgia, incumbent Governor Brian Kemp won a decisive victory over his main challenger, Trump endorsee and former senator David Perdue, whose campaign failed to catch fire despite the ex-president’s loud interventions. Mr Trump’s former no 2, Mike Pence, campaigned for Mr Kemp.The state’s GOP senate primary saw the nomination of controversial ex-footballer Herschel Walker, a very popular grassroots figure coaxed into the race by Trump himself whose sometimes erratic behaviour,...
GEORGIA STATE・14 HOURS AGO
Newsweek

The pontiff has previously said that bishops should "not going around condemning or not condemning."
CONGRESS & COURTS・4 DAYS AGO
USA TODAY

An ex-Fox News reporter says Joe Biden should be “taking some names and putting people in jail” over the right-wing’s great replacement theory.Carl Cameron told MSNBC that he believes his former employer and star host Tucker Carlson participate in the same kind of dangerous rhetoric that reportedly inspired the mass shooting in Buffalo.Ten people were killed and three wounded by a teenage gunman during the allegedly racially-motivated attack in the New York city over the weekend.MSNBC’s Nicole Wallace asked Cameron, who was a chief political correspondent for Fox News until 2017, how “the ideology left in the mass shooter’s...
PUBLIC SAFETY・2 DAYS AGO
People

"I'm very excited to finally tell my story," Kellyanne Conway said Monday during an interview with PEOPLE before the release of her memoir, Here's the Deal, out now. That story begins in a small town in southern New Jersey and follows Conway to Washington D.C., where a hard-earned career as a pollster and political consultant led to historic achievement as the first woman to run a successful presidential campaign when she helped elect Donald Trump in 2016 and served in his White House as senior counselor to the president.
RELATIONSHIPS・1 DAY AGO
Washington Examiner

Russian President Vladimir Putin on Monday accused Western intelligence services, specifically the CIA, of advising Ukraine on how to assassinate a senior Russian propagandist, Vladimir Solovyov. While Putin said his Federal Security Service disrupted the plot against Solovyov, the evidence for the plot's existence is far from convincing. After all,...
POLITICS・29 DAYS AGO
BuzzFeed News

Thomas Webster’s trial kicked off with dueling videos from the Capitol and competing theories of what they showed.
LAW ENFORCEMENT・28 DAYS AGO

Sarah Sanders jumps on Texas shooting to justify ban on abortions, not guns

Former White House press secretary Sarah Sanders, who won the Republican primary for Arkansas governor, used her victory speech on Tuesday to call for a ban on abortions while mourning the Texas school shooting deaths.Ms Sanders said that the shooting in Texas’ Robb Elementary School in Uvalde, in which at least 19 children and 2 adults were killed, was a “stark and humbling reminder of just how precious life is”. “Every single life has value and the most vulnerable among us are the ones we should be fighting for and protecting the most,” she added.“I can assure you that...
TEXAS STATE・8 HOURS AGO
TheWrap

In a surprise to no one, Kimmel devoted much of his opening monologue on Monday’s “Jimmy Kimmel Live!” to roasting Marjorie Taylor Greene after the far-right congresswoman testified last week in a Georgia court about her role in the Jan. 6 Capitol riot. Kimmel — who was...
WASHINGTON, DC・29 DAYS AGO
The Independent

Pelosi pushes back on archbishop who denies her Communion

House Speaker Nancy Pelosi pushed back Tuesday on the decision by San Francisco's conservative Catholic archbishop to deny her Communion over her support of abortion rights, saying she respects that people have opposing views but not when they impose them on others.The California Democrat says she comes from a large family with many members who oppose abortion. “I respect people’s views about that. But I don’t respect us foisting it onto others.” Pelosi added, “Our archbishop has been vehemently against LGBTQ rights. In fact he led the way in an initiative on the ballot in California.”Pelosi made her comments...
SAN FRANCISCO, CA・1 DAY AGO
The Independent

A lawyer for Hillary Clinton's 2016 presidential campaign repeatedly billed to the campaign “general political advice" and legal work related to a since-debunked secret back channel between Donald Trump and Russia, according to evidence shown to jurors Wednesday in the attorney's trial.Prosecutors presented the billing records as part of an effort to convince jurors that Michael Sussmann was acting on behalf of Clinton's campaign when he approached the FBI with computer data that he said showed a link between the Trump Organization, the former president's company, and Russia-based Alfa Bank. The FBI investigated but quickly determined no such link...
U.S. POLITICS・1 HOUR AGO