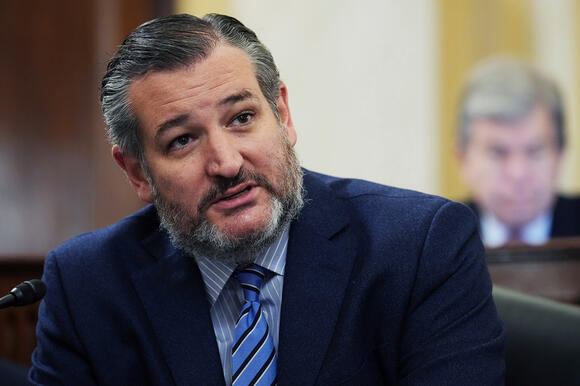 Ted Cruz last week begged for Tucker Carlson’s forgiveness last week after he called the Jan. 6 riot at the Capitol a “violent terrorist attack.” Ted Cruz this week grilled the FBI about whether federal agents instigated the riot, an unfounded conspiracy theory Tucker Carlson brought into the mainstream last summer.

“How many FBI agents or confidential informants actively participated in the events of Jan. 6?” Cruz asked Jill Sanborn, the executive assistant director of the FBI’s National Security Branch.

“Sir, I am sure you can appreciate that I can’t go into the specifics of sources and methods — ” Sanborn began before Cruz cut her off to ask a series of similar questions, including whether the FBI or its informants “actively participate[d]” in the events of Jan. 6, or if they committed or incited any violent crimes. Sanborn again said she could not answer.

“Ms. Sanborn, who is Ray Epps ?” Cruz then asked, referencing a figure right-wing circles have pegged as a potential federal informant who helped instigate the riot.

“I’m aware of the individual, sir,” Sanborn said. “I don’t have the specific background to him.”

Infowars cheered Cruz’s questioning on Tuesday. Jones called Carlson “the most important person in the world” and praised the senator for “a good job today bringing up Ray Epps and Jan. 6.”

The conspiracy theory surrounding Epps started on a 4chan message board over the summer, according to The New York Times , where video was shared of Epps telling a crowd on Jan. 5 that they should “go into the Capitol” the following day. The crowd didn’t take kindly to the idea and started chanted, “Fed! Fed! Fed!” The 4Chan post described the video as a “Fed … caught on camera encouraging the crowd to raid the Capitol on the next day.” Darren Beattie, a former Trump speechwriter who was fired for appearing on a panel with a white nationalist, then published an article on the FBI’s potential involvement on his site Revolver News. Tucker Carlson picked it up and brought Beattie on his primetime show. The theory has since spread like wildfire, despite the lack of evidence Epps has any connection to the FBI.

Several lawmakers have floated it, at the least, before Cruz questioned Sanborn about it on Tuesday. Four months after the initial video was shared on 4chan, Rep. Thomas Massie (R-Ky.) played it during an October congressional hearing. On the anniversary of Jan. 6, Greene and Gaetz, in their Republican “response” to events commemorating the day , told the media they believe the FBI orchestrated the insurrection by encouraging Trump’s followers to enter the Capitol. They placed particular focus on Epps, citing Revolver News as a source of their information.

What the right didn’t realize as it has been bashing Democrats for ignoring Epps is that the Jan. 6 committee questioned Epps back in November, as a spokesperson for the panel announced on Tuesday . He denied being an informant. “Mr. Epps informed us that he was not employed by, working with, or acting at the direction of any law enforcement agency on January 5th or 6th or at any other time, and that he has never been an informant for the FBI or any other law enforcement agency,” the spokesperson said.

But for the GOP, Epps is a convenient scapegoat, a figure they can use to deflect blame from Trump and his supporters and onto the FBI. The FBI has a long history of orchestrated fake terrorist plots, as Mother Jones pointed out recently , but that doesn’t change the fact that there is no evidence Epps was an FBI informant, or that a mob of Trump supporters broke into the Capitol in a violent attempt to overturn the results of the 2020 election.

Wait, Epps says he’s not a fed? I guess that’s it then. Besides, the feds haven’t ever done anything like this before, so I’m sure we can trust them. Let it go, people. #lgb

Click here to read the full article. John Eastman, the right-wing lawyer close to former President Donald Trump who authored a memo outlining how to overturn the 2020 election, is seeking to shield from the House Jan. 6 committee two “hand-written notes” from Trump about “information that he thought might be useful” for an anticipated court battle over the election results. Politico first reported the news Friday, citing a court filing. That filing also reveals that Eastman regularly communicated with Trump in the lead-up to the Jan. 6 insurrection. This occurred either “directly with President Trump by phone and by email...
PRESIDENTIAL ELECTION・2 DAYS AGO
Rolling Stone

Click here to read the full article. In his final day on the stand in his $50 million defamation trial against ex-wife Amber Heard, Johnny Depp told the court “the only person that I have ever abused in my life is myself.” After a three-day break in which the court was dark, the seven-person jury listened to a series of audio recordings — often chaotic and difficult to decipher — that included a Depp prediction that Heard “will hit the wall hard,” a phrase that also appeared in a text message written by the actor that was introduced to the court. “You...
CELEBRITIES・27 DAYS AGO
Rolling Stone

Click here to read the full article. Mama Riri and A$AP Daddy! Rihanna and her boyfriend A$AP Rocky have officially welcomed their first child, according to People. “Rihanna is doing well. They are very excited to be parents,” a source close to the couple told People. “Rihanna is already a wonderful mom.” Rih and Rocky have become a music power couple and the Fenty Beauty founder has been known for going out and about showing her baby bump throughout her pregnancy. Earlier this month, Rihanna was even featured in the music video for Rocky’s track “D.M.B” where the two are seen running the...
CELEBRITIES・3 DAYS AGO
The Guardian

Pennsylvania Republicans have nominated state senator Doug Mastriano to be the next governor. Mastriano is one of the most radical gubernatorial candidates ever to receive a major party nomination. Many Republicans have indulged Trump’s claims that Democrats stole the 2020 presidential election. But few have gone as far as Mastriano...
PENNSYLVANIA STATE・3 DAYS AGO

International order will be thrown out the window if Russia is able to escape consequences over its invasion of Ukraine, US Gen. Mark Milley told CNN.
POLITICS・26 DAYS AGO
AOL Corp

Former President Donald Trump worked his Pennsylvania primary endorsements to make him look like a winner, but exasperated Republicans in the state say the end result could boomerang in ways that damage both the party and Trump's own chances should he run for president in 2024. “This is the most...
GEORGIA STATE・3 DAYS AGO
HuffPost

Fox News host Tucker Carlson has insinuated that Elon Musk has restored his Twitter account after being suspended from the social media platform.On Monday, it was confirmed that controversial billionaire Musk has reached a deal to purchase Twitter for $44 billion – news that has delighted many right-wing figures.Following the back and forth negotiations, the deal is expected to go through later this year, when Musk will officially take control.Conservative figures have welcomed the deal because of Musk’s advocacy of free speech, with many seeing it as a turning point away from liberalism in media.On 23 March, Carlson was suspended...
BUSINESS・26 DAYS AGO

"There was no subject he considered beyond his expertise," she said of her former White House colleague.
CELEBRITIES・8 HOURS AGO
Fox News

EXCLUSIVE: A group of Republican senators is introducing legislation to block the Biden administration from sending personnel and funding from the Department of Veterans Affairs (VA) to alleviate the crisis at the southern border. The senators are alarmed by the Biden administration's announced termination of Title 42 on May 23,...
CONGRESS & COURTS・26 DAYS AGO
The Atlantic

Last Monday, Malcolm Nance, an MSNBC talking head and former sailor in the United States Navy, showed up on the channel by satellite from Ukraine, dressed to kill. He wielded an assault rifle and wore full-camo military dress, including a ballistic helmet, and U.S. and Ukrainian flag patches. About a month ago, he said, he decided he was “done talking.” He then talked about how he had joined Ukraine’s international legion to help the country “fight [against Russia’s] war of extermination—an existential war.” Others have traced a similar journey. Andy Milburn, a journalist and ex-Marine who stopped writing and began training Ukrainians for combat, wrote an article about how he, too, was finished writing articles about Ukraine. “It just started to seem so frivolous,” he wrote, solemnly. “I didn’t want to be an observer.”
MILITARY・27 DAYS AGO
Newsweek

The former president referenced scoring well on a cognitive test in 2018, which is designed to detect whether a person has early stages of dementia.
DELAWARE COUNTY, OH・28 DAYS AGO

Greene testified on Friday that she didn't recall whether she asked Trump to invoke military rule, despite telling Meadows to relay the idea to Trump.
ATLANTA, GA・27 DAYS AGO
USA TODAY

Click here to read the full article. The hard right’s takeover of the Supreme Court is real, and is having real consequences. But despite that leaked decision that would overturn Roe, this takeover isn’t just about abortion, and it’s not just about the Supreme Court. In fact, Trump-appointed judges at all levels of the judiciary are remaking nearly every aspect of American law, from voting rights to environmental regulations, police accountability to LGBTQ and women’s equality. There are also a lot of these judges. In four years, the Trump administration put a record 226 life-tenure federal judges on the bench. And...
CONGRESS & COURTS・1 DAY AGO
Newsweek

The mother has questioned whether the soldiers would let her son live even if she did send the money.
MILITARY・27 DAYS AGO
Newsweek