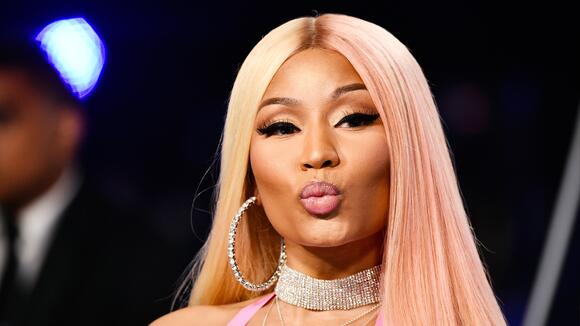 In hopes of holding off the Barbz when it comes to new music, Nicki Minaj fulfilled her fan’s “special request” and shared a never-before-seen pregnancy pic that has her looking like a straight up floral goddess.

“Archive pregger pic -special request from the Barbz cuz I owe them a lot right now & I’m tryna hold them off for a lil while longer love you ..” Nicki wrote alongside the photo shot by legendary photographer David LaChapelle .

After a fan of her’s tweeted a close up of the pic saying, “this is really the best photo from all the shoots and you kept it from us for this long, truly sick.” Nicki felt obliged to reply and give a reason why.

Tweeting back, “honestly, most of the pregger pics (post Bey) had a floral vibe so I posted the Harajuku theme— which felt more unique to my journey. The other MAJOR reason was that this one felt so naked to me & during my pregnancy that made me feel rlly uncomfortable.”

Why she was at it, Nicki answered some fan questions, one of which was about what her reaction was when she found out she was having a baby boy.

Responding, “we were really praying for a boy & when we found out, we were just so overwhelmed with gratitude. Now he’s a cute lil KungFuPanda who also thinks he’s an elf who can fly  he literally did the 'move' & tried to fly out of his playpen when I wouldn’t take him into the studio.”

Loves it! We’re totally here for sharing Nicki. Now if she could only share some new music. Yeah… we know, she shared this to hold us over. But we can’t help it, we’re not very patient.

The racist comments being made on this article are out of pure ignorance...

Somewhere in China a ugher head was shaved to make that weave,boycott weaves and wigs now

Laughter erupted in courtroom after Johnny Depp said he doesn’t watch his own movies and couldn’t recall the question he was asked. “I don’t watch them. I feel better not watching them. What was the question again?” Mr Depp said to laughter from the room. Johnny Depp trial – latest updates“Order in the court, or I will have you removed,” Judge Azcarate said. “Understood? Thank you.”The defamation trial between Mr Depp and Amber Heard began on Monday 11 April in Fairfax, Virginia following Mr Depp’s lawsuit against his ex-wife in March 2019. Mr Depp is arguing that she defamed him...
CELEBRITIES・28 DAYS AGO
Us Weekly

The show — and the vacation — must go on. Jada Pinkett Smith determined that the family trip to India wasn't going to be canceled due to Will Smith's Oscars slap. "Will and Jada have taken the family on [a] vacation that was already planned," a source exclusively tells Us Weekly. The Concussion star, 53, […]
CELEBRITIES・29 DAYS AGO
SheKnows

Click here to read the full article. It seems like everyone was rooting for Renée Zellweger and Ant Anstead to get together, including an unexpected duo: the Property Brothers. Drew and Jonathan Scott recently revealed that they were the ones that ended up getting Zellweger and Anstead to meet, and subsequently fall in love. And their hard work ended up paying off! Back on April 14, 2022, the Scott brothers sat down with ExtraTV to talk about everything from Drew’s upcoming fatherhood to Jonathan loving GF Zooey Deschanel’s Vanity Fair gown. While we loved the entire interview, we’re losing it over...
CELEBRITIES・29 DAYS AGO

After weeks of silence, Chris Rock has finally addressed his now-infamous incident with Will Smith at March's 94th Annual Academy Awards. During another sold-out show at Baltimore's Lyric Performing Arts Center on Friday, Rock directly referenced the slap, but only spent a second on it before moving on with his set.
BALTIMORE, MD・29 DAYS AGO
HipHopDX.com

Too $hort has worked with a score of legendary producers throughout his almost 40-year career, from Jermaine Dupri and Lil Jon to Daz Dillinger and DJ Pooh. But one big-name beatsmith he passed up the opportunity to work with was Kanye West. During a recent interview with VladTV, the Bay...
CELEBRITIES・28 DAYS AGO
hotnewhiphop.com

50 Cent cast doubt on Megan Thee Stallion's recent comments about not having been in an “intimate relationship” with Tory Lanez, prior to the infamous shooting in July 2020 which left her with gunshot wounds. Megan's comment came during a recent interview with Gayle King, during which she...
CELEBRITIES・27 DAYS AGO
People

Megan Fox wants her kids to express themselves however they please. In a wide-ranging interview with Glamour U.K. for their April cover story, the 35-year-old actress opens up about how she teaches her children, Journey River, 5, Bodhi Ransom, 8, and Noah Shannon, 9, about gender identity and encourages them to be confident in who they are.
FAMILY RELATIONSHIPS・27 DAYS AGO

A woman has revealed several “red flags” that she found in the apartment of the man she’s dating, which included two books about pregnancy and a woman’s ring.In a recent video shared to TikTok, Devin, @discoveringdevin, filmed herself sitting on a bed and putting her thumb down, as the text reads: “Red flags in his apartment.”She then began by showing four Apple MacBooks, all placed on top of each other, on a desk. “Four laptops…what are you hiding?” Devin wrote in the text over the clip.Next, she documented what appeared to be a “girl’s ring” on a white shelf....
RELATIONSHIP ADVICE・28 DAYS AGO
Insider

She’s definitely embracing the Hawaii lifestyle, and now “NCIS: Hawai’i” star Vanessa Lachey is showing off her everyday surrounding to her Instagram followers. “Hawai’i = Home,” Vanessa Lachey declares in her latest social media post. The “NCIS: Hawai’i” star also shares a snapshot of her sitting in a breathtaking area in Hawaii.
HAWAII STATE・28 DAYS AGO
hotnewhiphop.com

Flo Milli is setting some boundaries. The Alabama native is known for hits like "In The Party," "May I," and "Not Friendly," and while she loves to see fans in the audience having a good time and turning up at her shows, she's not impressed with watching them snort lines from up on stage.
CELEBRITIES・29 DAYS AGO

It seems Coi Leray is getting fed up with the drama. She and her father, Benzino, have not seen eye to eye for quite some time, and despite numerous attempts to mend their relationship, they keep ending up back at square one. Yesterday, 50 Cent, whose been feuding with Benzino...
CELEBRITIES・29 DAYS AGO
IndieWire

Click here to read the full article. Nearly 50 years after the original “Rocky” hit theaters, the classic boxing franchise keeps getting up off the mat. Ryan Coogler breathed new life into the series with 2015’s “Creed,” which followed Sylvester Stallone’s Rocky Balboa as he trained a young boxer named Adonis (Michael B. Jordan), the son of his late rival Apollo Creed. The film earned strong reviews for taking the franchise in a modern direction while maintaining what people loved about the original films, and sequels were quickly planned. When “Creed II” was released in 2018, it cemented Michael B. Jordan’s...
MOVIES・29 DAYS AGO
Complex

Benzino is once again airing out some family business. After previously calling 50 Cent the “first hip-hop rat,” and getting into various other conflicts with his daughter Coi Leray, the rapper has now name-dropped both of them in a Twitter tirade. On Sunday, Fif took to Instagram to...
CELEBRITIES・28 DAYS AGO
Popculture

Spring is always a big time for engagements and weddings, and two beloved internet personalities are the latest to update their relationship status. On April 18, Rachel "Seltzer" Quirico revealed she and longtime boyfriend Trevor "TorcH" Housten were tying the knot after 17 years together. Both of them are beloved figures in the esports world, with Seltzer notably starring in the Syfy reality show WCG Ultimate Gamer. She's also hosted numerous esports tournaments and events for TV/streaming outlets; she also made a recent appearance on G4 TV's Boosted.
RELATIONSHIP ADVICE・28 DAYS AGO
PopCrush

90 Day Fiancé: Before the 90 Days star Johnny Chao is showing off a new look on social media. The reality TV star rocked a fresh-faced look on the show. However, Chao debuted some new facial hair in his most recent post on Instagram. More specifically, he grew a beard and mustache.
TV & VIDEOS・27 DAYS AGO
Insider

"The sisters are clearly concerned for our brother's safety and the credibility of the brand," Khloe Kardashian wrote in a 2016 email.
LOS ANGELES, CA・28 DAYS AGO
Daily Mail

Katy Perry reacted quite hilariously to a Top 11 contestant on American Idol during a unique song challenge on Monday night's episode. Each of the remaining contestants were given a song to perform by each judge - Perry, Lionel Richie and Luke Bryan - with the singer selecting one and then tasked with guessing which judge picked that song for him or her.
MUSIC・28 DAYS AGO
Audacy

Doja Cat has kept her promise to update fans after giving everyone quite a scare on Thursday, when she told followers that her “whole throat is f***ed so i might have some bad news for yall coming soon.”
MUSIC・3 DAYS AGO