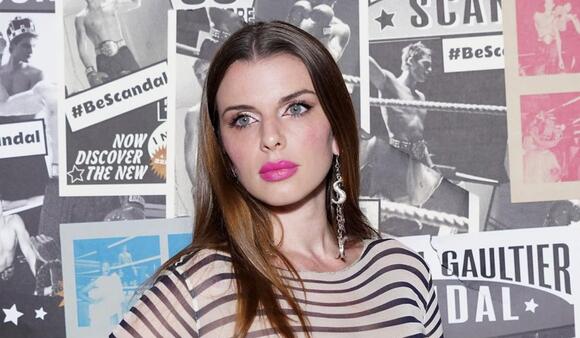 Well, this could be awkward. Kanye West’s new girlfriend Julia Fox has confessed that she was such a “die-hard” fan of his estranged wife Kim Kardashian and her family’s reality TV show that she “wanted them to be my family”.

The Uncut Gems actress, 31, and the rapper, 44, recently confirmed their relationship complete with PDA-heavy photos in Interview magazine after first meeting in Miami on New Year’s Eve where she claimed they had an “instant connection.”

Rewind a little bit further back in December before she and West had met however, and Fox made some now super cringe remarks in an episode of her Spotify podcast Forbidden Fruits with co-host Niki Takesh.

While looking back on the pop culture events of 2021, Fox touched on Kardashian filing for divorce from West and also shared her disappointment over her long-running show Keeping Up With The Kardashians coming to an end after 14 years.

“I’m gonna miss Keeping Up,” she reflected. “I’ve been watching Keeping Up since it first came out in like 2007, when watching it was embarrassing. [We are] like die-hard, O.G. [fans of the show]. ... I, like, wanted them to be my family.”

Poor girl! Getting involved with Kanye West! What is she thinking! He is bomb ready to explode 99.9% most of the to time! Run, lady, while you can!!!!!

Figures...gotta LOVE that they suspect folks who 'hero-worship' celebrities are lesser-intelligent. Only a complete bore would find Kanye & his hootchie-baby-mama worth giving 2 hoots about!!

Thomas Tuchel has admitted the likes of Cesar Azpilicueta and Marcos Alonso now face a “strange” limbo at Chelsea. Blues boss Tuchel has already revealed the Stamford Bridge club are in talks with Azpilicueta about his future, despite the club captain having triggered an automatic one-year contract extension.
PREMIER LEAGUE・7 HOURS AGO
newschain

Boxer Anthony Joshua and footballer Jadon Sancho are among those who have sent messages of support to an 11-year-old boy who lost his finger while “fleeing school bullies”, the boy’s mother has said. Raheem Bailey was beaten by a group of children at school on Tuesday, Shantal...
CELEBRITIES・1 DAY AGO
newschain

How life in Russia has changed after three months of war

After three months of war, Russia faces a summer of economic misery, one expert said. It took just days for the conflict to come home after Vladimir Putin announced the invasion of Ukraine in February – not with cruise missions and mortars but in the form of unprecedented and extensive volleys of sanctions by western governments and economic punishment by corporations.
POLITICS・12 HOURS AGO
Hello Magazine

According to Tina Brown's new book, "The Palace Papers," Prince William was aware of his status as future king from a young age.
CELEBRITIES・27 DAYS AGO
The Independent

Laughter erupted in courtroom after Johnny Depp said he doesn’t watch his own movies and couldn’t recall the question he was asked. “I don’t watch them. I feel better not watching them. What was the question again?” Mr Depp said to laughter from the room. Johnny Depp trial – latest updates“Order in the court, or I will have you removed,” Judge Azcarate said. “Understood? Thank you.”The defamation trial between Mr Depp and Amber Heard began on Monday 11 April in Fairfax, Virginia following Mr Depp’s lawsuit against his ex-wife in March 2019. Mr Depp is arguing that she defamed him...
CELEBRITIES・28 DAYS AGO
OK! Magazine

Donald Trump didn't hold back when asked his opinions on the royal family during a sit down for Piers Morgan Uncensored. While chatting with the titular host for an interview that airs on Monday, April 25, the former president took aim at Meghan Markle, insisting he hasn't been "a fan" of hers "from the beginning" because of how she treats Prince Harry."Poor Harry is being led around by his nose," he told Piers Morgan. "And I think he’s an embarrassment." Trump also believes that the parents-of-two's dynamic will eventually lead to irreparable marital strife. "I want to know what’s going...
RELATIONSHIPS・28 DAYS AGO
Outsider.com

Just a little over two months after Whoopi Goldberg was suspended from “The View” for insensitive remarks about the Holocaust, former “The Talk” co-host Sharon Osbourne is weighing in on the situation. Osbourne also takes aim at the double standards she believes are in the TV industry.
CELEBRITIES・27 DAYS AGO

Megan Fox wants her kids to express themselves however they please. In a wide-ranging interview with Glamour U.K. for their April cover story, the 35-year-old actress opens up about how she teaches her children, Journey River, 5, Bodhi Ransom, 8, and Noah Shannon, 9, about gender identity and encourages them to be confident in who they are.
FAMILY RELATIONSHIPS・27 DAYS AGO
Us Weekly

The show — and the vacation — must go on. Jada Pinkett Smith determined that the family trip to India wasn't going to be canceled due to Will Smith's Oscars slap. "Will and Jada have taken the family on [a] vacation that was already planned," a source exclusively tells Us Weekly. The Concussion star, 53, […]
CELEBRITIES・29 DAYS AGO
HipHopDX.com

Too $hort has worked with a score of legendary producers throughout his almost 40-year career, from Jermaine Dupri and Lil Jon to Daz Dillinger and DJ Pooh. But one big-name beatsmith he passed up the opportunity to work with was Kanye West. During a recent interview with VladTV, the Bay...
CELEBRITIES・27 DAYS AGO
OK! Magazine

Prince William and Prince Harry's relationship has been strained ever since the bombshell Oprah Winfrey tell-all which was later followed by Harry and his wife, Meghan Markle, abandoning their royal duties and moving to the United States. Now, royal author Robert Jobson is further opening up about what he's learned about The Duke Of Cambridge over the years. According to his sources, William is still very disappointed about the sit-down, and at one point, wasn't sure what the future would hold for their brotherly bond. "To say William felt deeply let down would be an understatement," a source claimed per...
CELEBRITIES・29 DAYS AGO

Click here to read the full article. It seems like everyone was rooting for Renée Zellweger and Ant Anstead to get together, including an unexpected duo: the Property Brothers. Drew and Jonathan Scott recently revealed that they were the ones that ended up getting Zellweger and Anstead to meet, and subsequently fall in love. And their hard work ended up paying off! Back on April 14, 2022, the Scott brothers sat down with ExtraTV to talk about everything from Drew’s upcoming fatherhood to Jonathan loving GF Zooey Deschanel’s Vanity Fair gown. While we loved the entire interview, we’re losing it over...
CELEBRITIES・29 DAYS AGO
Outsider.com

“NCIS: Los Angeles” star Daniela Ruah absolutely killed it on the red carpet and stage last night at the International Portuguese Music Awards. While everyone at home was preparing for tonight’s “NCIS: Los Angeles” episode, Daniela Ruah was getting all dressed up to host the IMPA Awards. The ceremony took place at the Providence Performing Arts Center in Providence, Rhode Island, on Saturday, April 23.
LOS ANGELES, CA・29 DAYS AGO
Popculture

90 Day Fiancé stars Anna-Marie Campisi and Mursel Mistanoglu have added a little boy to their family! The couple, who tied the knot on Season 7 of the TLC reality show, announced on Instagram this week that their son, Gokhan John, had been born via a surrogate on Monday, April 11 after the couple's initial struggle with fertility.
FAMILY RELATIONSHIPS・27 DAYS AGO
Outsider.com

She’s definitely embracing the Hawaii lifestyle, and now “NCIS: Hawai’i” star Vanessa Lachey is showing off her everyday surrounding to her Instagram followers. “Hawai’i = Home,” Vanessa Lachey declares in her latest social media post. The “NCIS: Hawai’i” star also shares a snapshot of her sitting in a breathtaking area in Hawaii.
HAWAII STATE・27 DAYS AGO
hotnewhiphop.com

50 Cent cast doubt on Megan Thee Stallion's recent comments about not having been in an “intimate relationship” with Tory Lanez, prior to the infamous shooting in July 2020 which left her with gunshot wounds. Megan's comment came during a recent interview with Gayle King, during which she...
CELEBRITIES・27 DAYS AGO
The Independent

A woman has revealed several “red flags” that she found in the apartment of the man she’s dating, which included two books about pregnancy and a woman’s ring.In a recent video shared to TikTok, Devin, @discoveringdevin, filmed herself sitting on a bed and putting her thumb down, as the text reads: “Red flags in his apartment.”She then began by showing four Apple MacBooks, all placed on top of each other, on a desk. “Four laptops…what are you hiding?” Devin wrote in the text over the clip.Next, she documented what appeared to be a “girl’s ring” on a white shelf....
RELATIONSHIP ADVICE・28 DAYS AGO
hotnewhiphop.com

It seems Coi Leray is getting fed up with the drama. She and her father, Benzino, have not seen eye to eye for quite some time, and despite numerous attempts to mend their relationship, they keep ending up back at square one. Yesterday, 50 Cent, whose been feuding with Benzino...
CELEBRITIES・29 DAYS AGO
buzzfeednews.com

LOS ANGELES — Kris Jenner's boyfriend, Corey Gamble, testified on Tuesday that he overheard Blac Chyna threatening to kill Rob Kardashian after Rob had called his mom while he was allegedly being attacked by his ex-fiancé. "I could just hear Chyna screaming, 'Fuck you. I'm going to kill...
CELEBRITIES・26 DAYS AGO