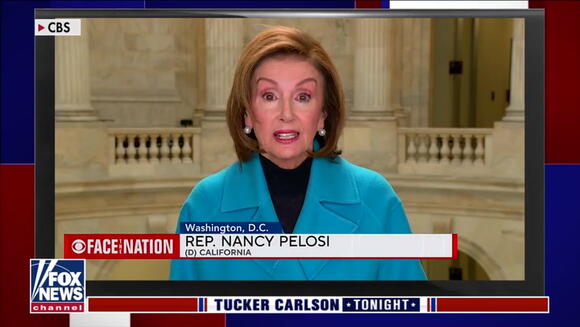 Tucker Carlson decided to sink to a new low and dedicated a segment of his show to attack the appearance of 81-year-old House Speaker Nancy Pelosi and compared her to the late pop star Michael Jackson .

Rather than reporting on the news (or in Carlson’s case spreading Covid misinformation and peddling conspiracy theories ), it seems the Fox News presenter likened himself to a comedian as he began the lame skit where he said viewers would get “the shock of your life”.

“Now let’s be clear, this wasn’t a video of Michael Jackson performing his hit songs of the 1990s,” Carlon said.

“This appeared to be a living version of the international pop star that news reports claimed died of a drug OD more than a dozen years ago. And yet despite those claims there he was, fully, undeniably Michael Jackson talking on television. How can that be? Honestly, we have no idea. We’re not theologians here. This is merely a news program. We can only show you what we saw. Here it is.”

A clip is then played of Pelosi’s appearance on CBS News’ “Face the Nation” on Sunday, January 9 where she discussed the Capitol riot, one year on since it occurred.

“See? Michael Jackson. That was him,” Carlson added after the clip of the 81-year-old finished playing.

“No ‘Billie Jean.’ Apparently, he’s given up singing and is telling lies about politics. Same man. If you’ve ever seen Michael Jackson, you cannot forget the face – though admittedly, he’s had a lot of work done since we saw him last.”

Turns out Carlson’s is just as bad at comedy as he is at journalism - after all he’s even admitted himself that he tells a few porkies on his show.

In an interview, he told conservative media host Dave Rubin: “I mean, I lie if I’m really cornered or something. I lie. I really try not to. I try never to lie on TV. I just don’t â€• I don’t like lying. I certainly do it, you know, out of weakness or whatever,” The Guardian reported.

Meanwhile, Carlson later posted the segment to Twitter with the jibe: “Michael Jackson was spotted on live television over the weekend.”

Of course, critics of Carlson were disgusted by the presenter’s comments and made their feelings abundantly clear on the matter.

Tucker is the best. The FAKE NEWS MEIDA and Democrats don't like him because Tucker calls you all out. And he is right.

How is it actually possible that an 81 year old woman is one of the people in charge of running a country? She needs to retire already Jesus Christ.

Very simply, once you reach the age of 70, your political career should be over. If the President of the United States has a term limit, so to should all politicians. POS Pelosi and her crew should have been gone a decade ago.

Ricky Gervais, 60, has returned with his Netflix special SuperNature – and fans are already fed up with him telling everyone he's an atheist. In a snippet shared to the streaming platform's social media, the comedian says: "People quiz me on Twitter when they find out I'm an atheist, "They go: 'You don't believe in God at all?' and I go, 'no',"'Do you pray?' I go, 'no,'"They go, 'why don't you pray just in case there's a God?"I say: 'Why don't you put garlic over your door just in case there's a Dracula?'"Sign up to our free Indy100 weekly newsletterFans...
CELEBRITIES・2 DAYS AGO
Indy100

The highly publicised Johnny Depp v Amber Heard defamation trial is due to come to an end this week, but comedian Ricky Gervais believes neither of them “win”.The six-week hearing, broadcast live to the world, has seen testimony from high profile figures such as Ellen Barkin and Kate Moss, with many more listed as witnesses in the case.Fans have closely followed the case from the start as it’s been televised – a point that Gervais thinks is bizarre.Speaking to comedian and journalist Adam Glyn after the release of his controversial Netflix special, Gervais said: “I stay away from all that,...
CELEBRITIES・11 HOURS AGO