Celebrities who died in 2022 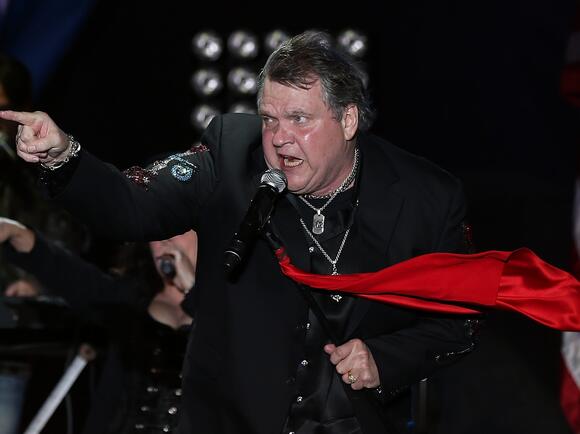 Like many stand-up comics of his era, Anderson found his big break when he appeared on "The Tonight Show with Johnny Carson" in 1984. It led to him being one of the biggest comics in the decade.

He did stand-up comedy specials, made more late night talk show appearances, and landed roles in classics like 1986's "Ferris Bueller's Day Off" and 1988's "Coming to America."

Then from 2016-2019 he found his highest acclaim playing the overbearing mother of a rodeo clown played by Zack Galifianakis in the FX series "Baskets." It led to Anderson winning a primetime Emmy for best supporting actor in the show's first season.

Anderson died on January 21 . Before then the comic announced he was being hospitalized to treat blood cancer.

A critic-turned-filmmaker, Bogdanovich's nuanced filmmaking style led to him becoming a darling of 1970s filmmaking, which resulted in timeless movies like "The Last Picture Show" and "Paper Moon."

He also had an eye for talent, discovering then-model Cybill Shepherd for "The Last Picture Show," leading to her becoming a star (the two also became a couple).

Though Bogdanovich's later works would not be as successful — he also had to deal with the horrific death of his girlfriend in 1980, Playboy model Dorothy Stratten , when her estranged husband shot her — he was always a fixture in Hollywood.

With his horn-rimmed glasses and neckerchief, his persona was one of an era long gone but well respected.

Bogdanovich died on January 6. No cause was given.

He's most known for his Emmy-nominated character radio disc jokey "Dr. Johnny Fever" Caravella in the TV sitcom "WKRP in Cincinnati" from 1978 to 1982.

Hesseman also was the star on another hit show, "Head of the Class," the teacher of a group of academically gifted group of high school students, from 1986 to 1990.

Know for his sarcastic comedic talents, Hesseman also starred in movies like "Shampoo," "Doctor Detroit," "Clue," and "Flight of the Navigator."

Hesseman died on January 29 from complications of colon surgery .

Known for his best-selling album "Bat Out of Hell" and for acting in films including "The Rocky Horror Picture Show" and "Fight Club," the performer was known for his larger-than-life performances.

His songs "Paradise by the Dashboard Light" and "I'd Do Anything for Love (but I Won't Do That)," became global hits with the latter earning him a Grammy.

"Our hearts are broken to announce that the incomparable Meat Loaf passed away tonight with his wife Deborah by his side," read a statement on his Facebook page . "Daughters Pearl and Amanda and close friends have been with him throughout the last 24 hours."

Meat Loaf died on January 20 . No cause was given.

Moseley is best known for playing one of Michonne's zombies on "The Walking Dead."

He also starred in "Queen of the South," the "Watchmen" TV series, and "The Hunger Games: Catching Fire."

"Everyone is devastated and still trying to process this," Minchew said. "Moses was an amazing person and so talented. His family, friends and fans will all miss him deeply. He gone way to soon."

The cause of his death has not been released.

Poitier was a trailblazing actor who — along with a career filled with landmark acting, directing, and producing roles — was also a voice for civil rights in the 1960s and an ambassador for his beloved home country of the Bahamas.

He made history when he became the first Black actor to win the Oscar for best actor for his performance in 1963's "Lilies of the Field." He played a handyman who encounters a group of nuns who believe he was sent to them by God to build them a new chapel.

His powerful, naturalistic acting talents were also celebrated in classic movies like "Guess Who's Coming to Dinner" and "In the Heat of the Night."

Poitier died on January 7 at his home in Los Angeles. The cause of death was a combination of heart failure, Alzheimer's dementia, and prostate cancer.

At the age of 9, Robbins landed the role that would give him eternal fame a when he was cast as the voice of Charlie Brown.

He voiced the iconic character for six "Peanuts" TV specials and one movie between 1963 and 1969. Highlights include staples in the franchise like "A Charlie Brown Christmas" (1965) and "It's the Great Pumpkin, Charlie Brown" (1966).

His final acting role was a 1972 episode of "My Three Sons."

Robbins died on January 18, his family told Fox 5 San Diego that the cause was suicide.

Saget, the stand-up comedian and actor, was best known for his role as Danny Tanner in the ABC sitcom "Full House" through the late 1980s to mid 1990s.

He also was known for being the host of "America's Funniest Home Videos" around the same time.

Despite a clean-cut image due to those roles, Saget also had a reputation for his adult-oriented stand-up routines, which were full of raunchy and explicit language.

But for millions, he will always be known as their "TV dad" thanks to his kind-hearted performance as Danny Tanner.

"I am broken. I am gutted. I am in complete and utter shock. I will never ever have another friend like him. I love you so much Bobby," actor John Stamos, who starred alongside Saget in "Full House" as Uncle Jesse, wrote on Twitter .

Saget was found dead in a hotel room at the Ritz-Carlton in Orlando, Florida on January 9. No cause was given, but a preliminary autopsy found "no evidence of drug use or foul play," Insider reported.

As the voice behind classic songs like "Be My Baby" and "Walking in the Rain," Ronnie Spector along with her all-girl group The Ronettes will be forever cherished.

After years being married to the producer of The Ronettes' hits in the 1960s, Phil Spector ( who died last year ), which Ronnie said led to years of abuse , she had a comeback in the late 1980s when she recorded a sample of "Be My Baby" for the Eddie Money hit "Take Me Home Tonight."

Spector died on January 12 following a battle with cancer .

The right-hand of the magazine's creative director and editor-in-chief Anna Wintour, Talley's fashion and outspoken nature transcended fashion for a generation.

He wasn't just a creative equal to Wintour, but was also a close confidant of Yves Saint Laurent, Karl Lagerfeld, Paloma Picasso, Diane von Furstenberg and countless others.

Talley died on January 18. No cause was given.

One of France's best-known actors, Ulliel found fame from his work in movies like "Paris, je t'aime," "A Very Long Engagement," "Hannibal Rising," and "It's Only The End Of The World." The latter of which he won the best actor award from France's famed César Awards in 2017.

Ulliel was also the face of Chanel for its mens fragrance Bleu de Chanel.

The actor was on the verge of superstardom as he stars in the anticipated Marvel series "Moon Knight."

Ulliel died soon after being hospitalized after injuring his head in a skiing accident near Grenoble on January 19, the actor's family told AFP .

Vitti was a muse to legendary Italian director Michelangelo Antonioni, starring in his early 1960s titles like "L'Avventura," "La Notte," and "L'Eclisse."

Her performance in L'Avventura wowed audiences and led to international fame.

Over her career she won five David di Donatello Awards for best actress, Italy's version of the Oscars, She also won a career Golden Lion award at the Venice Film Festival in 1995.

Vitti died on February 2 after a long battle with Alzheimer's disease, according to Italian media reports (via The Hollywood Reporter ).

Wilson was the cofounder of the instrumental rock band of The Ventures with Bob Bogle.

Wilson and Bogle formed a quartet band in Tacoma, Washington, and in the 1960s The Ventures helped popularize the electric guitar with the song "Walk, Don't Run" and the theme song to the hit series "Hawaii Five-O."

"Our dad was an amazing rhythm guitar player who touched people all over world with his band, The Ventures," son Tim Wilson said in a statement, according to The Tacoma News Tribune . "He will have his place in history forever and was much loved and appreciated. He will be missed."

Ronnie from the rosettes (band)also Mr Carson (worked on wheel of fortune) John madden Jay weaver (Christian musician)Clint arlis (Bachelorette contestantSidney Poitier(1st African win an oscarPeter bognavich the last picture showKim ming soo (netflix k drama actressDan reeves (football coachDwayne Hickman (classic movie actorMichael Lang one of the ones that created Woodstock Michael Wilmington was a criticand that's all I can think off the top of my head but sure I'm forgetting a few and last year don't even get me started , much more and some really good ones

LaBeouf, Lohan and 18 Celebrities Who Lost It All

We're obsessed with celebrity gossip -- watching stars react to internet trolls, scrolling through "most hated celebrities" lists, wondering to ourselves, "Why do people hate Nickelback?" But our...
CELEBRITIES・5 DAYS AGO
The US Sun

RAY Liotta, the brilliant actor who made his name in Martin Scorsese's crime classic Goodfellas, has passed away. The star died in his sleep in the Dominican Republic, where he was filming Dangerous Waters, according to Deadline. There were no signs of foul play or anything suspicious about the death,...
CELEBRITIES・2 DAYS AGO
Page Six

Ray Liotta and his fiancée enjoyed a meal at a luxury steakhouse in the Dominican Republic just two days before his sudden death. The “Goodfellas” star — who died Thursday in the Caribbean country at the age of 67 — had dinner with Jacy Nittolo at Naca’n Restaurant Tuesday night. “We were fortunate to host Ray for dinner on Tuesday night,” the restaurant’s Instagram account posted after the sad news broke. “He was a special person and talented actor that will be missed – your friends at Naca’n will remember you fondly – 🖤 #RestinPeace.” Naca’n shared a photo of the couple at the...
CELEBRITIES・1 DAY AGO
Insider

Liotta died in his sleep in the Dominican Republic where he was shooting the upcoming thriller "Dangerous Waters," Deadline reported.
CELEBRITIES・2 DAYS AGO
Insider

From Winona Ryder to Kate Moss, here are Johnny Depp's exes who have and have not supported him in his trial with Amber Heard

Kate Moss testified during Depp's defamation trial that the actor never harmed her or pushed her down the stairs during their relationship.
CELEBRITIES・16 HOURS AGO
Insider

Andie MacDowell and Helen Mirren were at the Cannes Film Festival on Friday for the "Mother and Son (Un Petit Frère)" screening.
THEATER & DANCE・1 DAY AGO
Insider

THEN AND NOW: The stars of 'Top Gun' 36 years later

Tom Cruise and Val Kilmer starred in the classic aviation movie that was released in May 1986. A sequel, "Top Gun: Maverick," is now in theaters.
MOVIES・1 DAY AGO

The 13 most heartbreaking moments on 'This Is Us,' ranked

"This Is Us" aired its series finale on May 24. The show was known for its tear-jerker episodes — here were the most difficult storylines to watch.
TV & VIDEOS・15 HOURS AGO