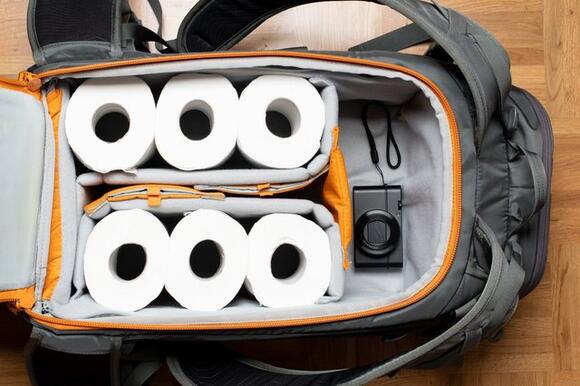 Traveler's diarrhea strikes as many as 60 percent of world travelers, making it the most common travel-related illness, according to the Centers for Disease Control and Prevention (CDC). More common, even, than its subtler cousin, traveler's constipation .

Like other types of diarrhea, it comes with loose stools and stomach cramps and can make you feel miserable, but it usually isn't life-threatening.

Sometimes called Montezuma's Revenge (after the last Aztec emperor in what is now Mexico), this type of upset stomach is more widespread in resource-limited regions, says Kalyani Meduri, MD , a gastroenterologist with AdventHealth Medical Group in Zephyrhills, Florida. That includes:

These are areas with warmer climates that often lack refrigeration and may have poor sanitation standards.

Here's what causes this type of diarrhea, and how to recognize, diagnose, prevent and treat it.

Most cases of traveler's diarrhea are caused by bacteria, with Escherichia coli (E. coli) accounting for about a third of all cases, according to a StatPearls paper updated in July 2021. Other offending bacteria include Campylobacter jejuni (especially in Southeast Asia), while viruses such as norovirus, rotavirus and COVID-19 as well as parasites can also cause traveler's diarrhea.

Traveler's diarrhea can affect anyone, but some factors make you more likely to get it:

Symptoms of traveler's diarrhea are no different from any other kind of diarrhea. They usually appear within four to 14 days of flying or any other type of travel, Dr. Meduri says, although the incubation period can be several weeks long in the case of certain parasites.

Signs of the condition include:

Diarrhea associated with COVID-19 will likely bring other telltale symptoms, like shortness of breath and coughing, Dr. Sonpal says.

Luckily, most people recover from traveler's diarrhea within a week, with the worst part lasting a day or two.

A small percentage of people with traveler's diarrhea go on to develop dehydration, according to the Mayo Clinic , which can lead to sepsis and kidney failure. Signs of dehydration include dark urine, dizziness, lightheadedness, weakness and feeling thirsty.

A few people with traveler's diarrhea go on to develop a form of irritable bowel syndrome with continued diarrhea, stomach cramping and bloating, per Johns Hopkins Medicine.

Most cases of traveler's diarrhea go away on their own and don't need a diagnosis.

However, doctors can diagnose the condition based on your symptoms and travel history or, in more severe cases, by testing a stool sample, according to Johns Hopkins Medicine .

How to Prevent Traveler’s Diarrhea 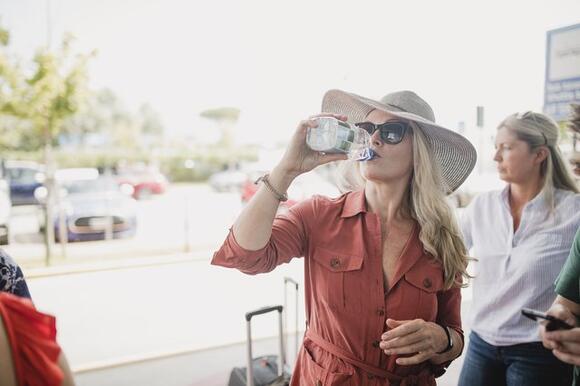 Regardless of the cause or symptoms, preventing traveler's stomach boils down to two key practices: Washing your hands often and being very, very diligent with what you eat and drink, Dr. Sonpal says.

Most cases of traveler's diarrhea are mild and go away on their own, per the Cleveland Clinic .

In the meantime, you can help calm symptoms by drinking lots of fluids, including water, electrolyte solutions and Pedialyte for children. Oral rehydration solutions can be purchased or made with half a teaspoon of salt, six small spoons of sugar and one liter of clean water.

The same anti-diarrheal drugs that may help prevent traveler's diarrhea — Imodium and Pepto-Bismol — may help treat the condition. But keep in mind that you shouldn't use these meds if you have bloody stools; in that case, you should see a doctor ASAP.

Antibiotics such as azithromycin (Zithromax), ciprofloxacin (Cipro), doxycycline (Vibramycin) and rifaximin (Xifaxan) should only be prescribed by a doctor and reserved for more severe cases.

When to See a Doctor

Make an appointment with a doctor if:

The 6 Best Home Remedies for Bunions

A podiatrist shares which home remedies for bunions actually work to help relieve pain and keep the condition from getting worse. Plus, when to see a doctor.
NEW YORK CITY, NY・9 DAYS AGO
LIVESTRONG.com

The 5 Best Fiber Supplements for Diarrhea

These are the best stool-hardening fiber supplements to help treat diarrhea, including the best capsule, powder and organic options, and the best-tasting pick.
HEALTH・7 DAYS AGO
LIVESTRONG.com

The 10 Best Ways to Prevent and Treat Jet Lag

Thanks to planes, you can traverse the U.S. from the Atlantic to Pacific in mere hours and get anywhere in the world in under a day. Just imagine what your ancestors would think of these speedy travels! But there's a downside to rapid transportation: jet lag. "The ability to travel...
NEW YORK CITY, NY・12 DAYS AGO
LIVESTRONG.com

Are Tattoos Bad for You? Here Are 4 Health Risks to Know

Are tattoos unhealthy? Here, we talk to doctors and look into the research to learn whether tattoos are bad for you and the health risks you should know.
SKIN CARE・8 DAYS AGO

Apple cider vinegar may be great in salad dressings, but sipping ACV for constipation isn't the best idea. Here's why, plus better remedies to try instead.
NEW YORK CITY, NY・5 DAYS AGO
LIVESTRONG.com

It's not all about fiber. Gastros say eating fish, seeds, oils and other healthy fats for gut health may promote bacterial diversity and lower inflammation.
NUTRITION・10 DAYS AGO
outbreaknewstoday.com

In a follow-up on the 14th Ebola Virus Disease (EVD) outbreak in the Democratic Republic of the Congo (DRC) (HERE and HERE), the World Health Organization (WHO) tweeted today:. Health authorities in #DRC confirmed a 2nd case of #Ebola in Mbandaka on 25 April. The 25-year old woman, now deceased, began experiencing symptoms 12 days earlier. Investigations indicate that as the 1st case patient’s sister-in-law, she was a high-risk contact.
PUBLIC HEALTH・29 DAYS AGO
LIVESTRONG.com

Want to Age Well? Do This as Soon as You Get Out of Bed Every Morning

Forget the wrinkle-smoothing creams and anti-aging serums. The secret to growing old gracefully comes straight from your sink. Yep, water helps keep every system in your body working smoothly. So, when you don't get enough of it, you'll eventually run into problems, especially as you age. Indeed, dehydration is a...
HEALTH・3 DAYS AGO

Exercise is one of the best things you can do for your joints. Movement helps deliver synovial fluid, which nourishes your joints with important nutrients and prevents friction between them, according to the U.S. National Library of Medicine. But not all exercises are good for your joints, and some can...
WORKOUTS・17 DAYS AGO
LIVESTRONG.com

Feeling shaky or trembling after waking up in the morning or from a nap can be worrisome experience. Here's why it might happen and what you can do about it.
HEALTH・16 DAYS AGO
LIVESTRONG.com

The Nutritional Value of Cherries: Calories, Vitamins and More

The nutrition and calories in 20 cherries make them a great snack. Sweet cherries, black cherries and acerola cherries have similar calories and nutrition info.
NUTRITION・8 DAYS AGO
LIVESTRONG.com

These are the best fiber supplements for diverticulosis and non-symptomatic diverticulitis, including the best powder, capsules, chewable and best on a budget.
NUTRITION・11 DAYS AGO

Most wild cherries are edible, but it can be easy to confuse fruit in the forest. A wild cherry tree is poisonous, so avoid the leaves, pits, bark and stem.
FOOD & DRINKS・13 DAYS AGO
LIVESTRONG.com

Carbs have been criticized over the last couple of years. And while eating too many refined, highly processed carbs (which can cause quick blood sugar and insulin surges and crashes) isn't good for you, other types of carbs can likely lengthen your lifespan. Indeed, healthy complex carbs (which are digested...
NUTRITION・17 DAYS AGO
FitnessVolt.com

Bodybuilding coach Charles Glass is known for his detailed workout routines but took the time to address some of the growing problems in the sport. In a recent YouTube video, Glass discusses the dangers of PEDs and explains that people are seeking fast gains instead of building muscle slowly. Charles...
WORKOUTS・29 DAYS AGO
LIVESTRONG.com

The 6 Best Home Remedies for Sunburn, and 3 to Skip

A dermatologist breaks down the best home remedies for sunburn pain, redness and itching and explains which treatments to avoid if you want sunburn relief.
SKIN CARE・14 DAYS AGO
LIVESTRONG.com

Too Anxious to Sleep? Here's How to Tell if It's Somniphobia

When you were little, you might've been afraid to drift off to dreamland, worried about a monster under your bed. As adults, most of us outgrow this nighttime fear. But for people with somniphobia, falling sleep still triggers terror. Sometimes referred to as "sleep dread," somniphobia is a specific type of anxiety or fear related to sleep that typically increases as bedtime approaches, says sleep expert Wendy Troxel, PhD, a senior behavioral and social scientist at the RAND Corporation and author of ​​Sharing the Covers: Every Couple's Guide to Better Sleep​​.​
MENTAL HEALTH・2 DAYS AGO
LIVESTRONG.com

The 6 Best Multivitamins for Older Adults

Here are the best multivitamins for seniors from brands such as Thorne, Bayer One a Day and Smarty Pants, and why older adults need more of certain nutrients.
NUTRITION・5 DAYS AGO
LIVESTRONG.com

Are blueberries good for brain health? Dietitians explain how these berries can support your mind and help keep you sharp into your golden years.
NUTRITION・4 DAYS AGO