Colts’ T.Y. Hilton on future: ‘I pretty much know what I want to do’ 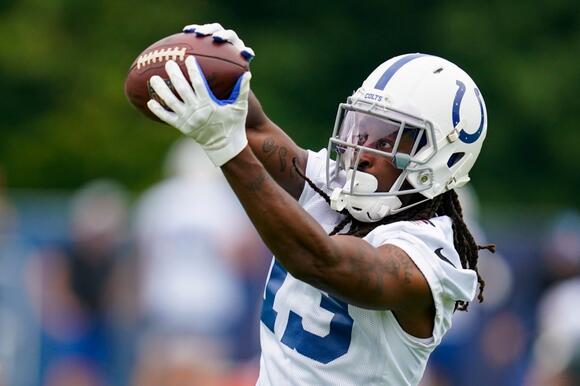 INDIANAPOLIS – That might have been it for T.Y. Hilton.

After nine playoff games, 47 catches, 781 yards and another three TDs.

After colossal collapse, what’s next for the Colts?

And after just two catches for 39 yards on five targets in the Indianapolis Colts’ 26-11 collapse to the Jacksonville Jaguars Sunday afternoon that ended their season.

Hilton has been the emotional catalyst for the team for the past several seasons, but a successor might be needed.

The team’s 2012 third-round draft pick has been evasive regarding his future, but Hilton considered retirement after undergoing neck surgery in late August.

“I didn’t pretty much tell nobody, but people close to me,’’ he said in October. “I was close to hanging it up.’’

In the aftermath of Sunday’s demoralizing loss, Hilton was asked if he considered he might have been walking off the playing field for the last time.

“No,’’ he said. “I haven’t thought about it. I’m going to take some time, talk to Jack (Doyle) and, you know, just go through if I want to play one more year.

Hilton always has insisted he won’t make any decision until sitting down with Doyle, his close friend. Doyle also could consider retirement after nine seasons. Doyle is under contract for 2022. Hilton will be a free agent after re-upping with the Colts last offseason with a one-year, $8 million contract.

“Just talk to him, see what he’s feeling,’’ Hilton said. “And once he makes his decision, I’ll kind of know what I want to do based on him . . . whether it’s here, whether it’s somewhere else.

“So I’ll make my decision sometime in the offseason.’’

At one point, Hilton indicated he’s all but decided what the future holds.

“I pretty much know what I want to do,’’ he said, “but I just want to take some time to reflect.’’

If Hilton retires, he’ll do so as one of the most prolific receivers in franchise history. His 631 receptions are tied with Hall of Famer Raymond Berry for 3 rd -most while his 9,691 yards are 3 rd behind Marvin Harrison (14,580) and Reggie Wayne (14,345). His 12 games with at least 150 yards are a franchise record.

Jonathan Taylor has ankle surgery, should be ‘ready to rock’ for Colts in 2023

The Indianapolis Colts’ cornerstone running back dealt with an injury to his right ankle much of the season, and decided arthroscopic surgery was the best course of action.
INDIANAPOLIS, IN・9 HOURS AGO
FOX59

The Colts have had trouble finding a legitimate edge pass rusher, so Yannick Ngakoue might be viewed as one of their top off-season priorities.
INDIANAPOLIS, IN・2 DAYS AGO
FOX59

On the Colts Blue Zone Podcast, Mike Chappell and company discuss the Colts' 2023 impending free agents and provide an update on the coaching search.
INDIANAPOLIS, IN・4 DAYS AGO
thecomeback.com

When the Cincinnati Bengals take on the Kansas City Chiefs in the AFC title game on Sunday night, they’ll be doing it without three of their starting offensive linemen as La’el Collins, Alex Cappa and Jonah Williams will all be sidelined from the game with injuries. The three...
CINCINNATI, OH・1 DAY AGO
FOX59

INDIANAPOLIS – It started with 32 teams. Now we’re down to four for this weekend’s conference championship games, with Sunday’s winners being “Big Game Bound.” The 49ers and Eagles kick off first for the NFC title at 3 p.m. ET, with the Bengals and Chiefs vying for the AFC crown at 6:30 p.m. ET. All […]
CINCINNATI, OH・3 DAYS AGO
FOX59

MUNCIE, Ind. — Parents of a 5-month-old girl were arrested on Thursday after doctors discovered the baby was suffering from two broken legs, a broken arm, 15 fractured ribs and two skull fractures that caused a brain bleed. The Muncie Police Department arrested Austin Lee Choate, 24, and Montana Alexis Davis, 23, on Thursday evening […]
MUNCIE, IN・2 DAYS AGO
FOX59

MUNCIE, Ind. — A Muncie man faces charges after police say he repeatedly hit and yelled at a young child and told a woman that he would kill her. In the probable cause affidavit filed in the case against Cory Seats, an officer with the Muncie Police Department wrote that they first learned about the […]
MUNCIE, IN・3 DAYS AGO
FOX59

Court docs: Suspect in deadly stabbing smoked ‘the rest of his meth’ before police arrested him

INDIANAPOLIS – The suspect in a deadly Indianapolis stabbing told investigators he smoked “the rest of his meth” before police could lock him up. Indianapolis Metropolitan police arrested 30-year-old Nicholas Radford in connection with the Jan. 24 death of 50-year-old Cornelius DeWayne Coleman, who was found fatally stabbed in the 200 block of South Illinois […]
INDIANAPOLIS, IN・3 DAYS AGO
FOX59

INDIANAPOLIS – Myles Turner is staying in Indiana. ESPN’s Adrian Wojnarowski reports the Pacers have signed the center to a two-year, $60 million contract extension, including an additional $17.1M renegotiation of this season’s salary. There had been speculation the team could trade him by the deadline if they couldn’t come to terms on a new […]
INDIANAPOLIS, IN・1 DAY AGO
FOX59

INDIANAPOLIS — An Indianapolis man has been found guilty of stabbing an ex-girlfriend and her 3-year-old daughter multiple times in the head with a steak knife before stealing her car and driving away with the child and her grandfather still inside. On Tuesday, a jury found Richard Rybolt guilty of two counts of attempted murder, […]
INDIANAPOLIS, IN・3 DAYS AGO
FOX59

Deep dish, thin crust, fire grilled — there’s no shortage of ways to make a pizza. Yelp is praising the wonder that is pizza in 100 different ways with its 2023 list of the top places for pizza in the United States and Canada. A trio of Indiana pizza spots made the cut, including two […]
INDIANAPOLIS, IN・3 DAYS AGO
FOX59

A southern Indiana man was arrested on numerous felony charges after being tracked down by troopers on a warrant for possession of methamphetamine.
HARRISON COUNTY, IN・2 DAYS AGO
FOX59

INDIANAPOLIS — An accused drug dealer on GPS monitoring is arrested this week following a police raid on Indy’s near east side. Indianapolis Metropolitan Police Department arrested two men on drug charges after cocaine and methamphetamine were found during a search at a near east side home. The drugs were found during an investigation at […]
INDIANAPOLIS, IN・2 DAYS AGO
FOX59

Dewayne Edward Patterson, age 64, was convicted in the 2020 murder of John Patton.
INDIANAPOLIS, IN・3 DAYS AGO
FOX59

Videos showing the violent arrest of 29-year-old Tyre Nichols, a Memphis man who died 3 days after he was beaten by police in a traffic stop Jan. 7, has been released by Memphis officials.
MEMPHIS, TN・2 DAYS AGO
FOX59

UPDATE: Miranda Huckeby shared on social media that Sky secured a ride from New Mexico. If all goes as planned, Sky and Merrick should be reunited by Friday. Original story: ANDERSON, Ind.- An 8-year-old boy is without his companion dog. The Huckeby family was driving cross-country in the process of moving to central Indiana from […]
INDIANA STATE・3 DAYS AGO
FOX59

1 of twins in Ohio Amber Alert has died

Ky'air Thomas died in Columbus this weekend, according to Davante Goins, a spokesperson and advocate for the Thomas family.
COLUMBUS, OH・12 HOURS AGO
FOX59

Dan Quinn, who had interviewed remotely for the job and was scheduled for a follow-up in-person meeting this weekend, reportedly has told the Colts and everyone else he’s remaining with Dallas.
INDIANAPOLIS, IN・3 DAYS AGO
FOX59

With the help of K9s, Edinburgh police recovered 234 grams of meth and six pounds of marijuana.
EDINBURGH, IN・9 HOURS AGO