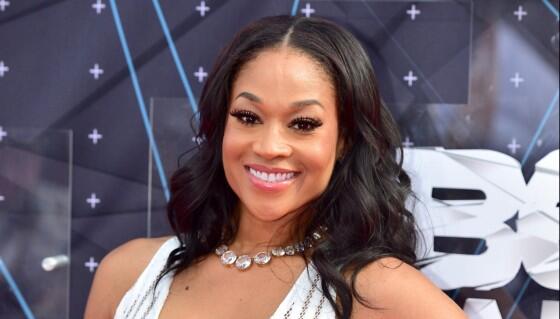 Congratulations to Mimi Faust as the Love and Hip Hop: Atlanta star has just announced her engagement to her longtime girlfriend, Ty Young! This engagement marks the second time around for the couple who recently rekindled their romance after calling it quits earlier last year.

The 50-year-old reality star and the now-retired WNBA player began dating in 2016 and captured the hearts of everyone when they showed how they navigated their growing love on social media. However, after a whirlwind romance, in March 2021, the couple confirmed that they had split after getting previously engaged. Mimi confirmed the news to fans when she went on Instagram Live to tell explain, “In relationships, you know, people grow apart. They grow different. They want different things. That’s what happened. We’re still friends. We still communicate.”

It looks like their time apart and strong friendship helped them rebuild their romantic relationship, as the pair began resurfacing around the holidays last year after Mimi started sharing photos of the two spending time together, leaving fans to speculate that they had rekindled their love. Then, in late December, Mimi opened up about their relationship, telling MadameNoire , “Yeah, we are kind of a work in progress. Oh, it’s a complete work in progress. There were things I needed to work on and things she needed to work on. We took a nice, good long break from each other. But we never stopped communicating,” said Faust. “We communicated even though we weren’t together for almost a year–we still communicated every day. And then as we were both working on ourselves, as we were still communicating, it brought us full circle back to where we are now. So life is funny like that.”

Fast forward to today, and the couple is celebrating Ty’s 50th birthday with a special surprise: an engagement! View this post on Instagram

Taking to Instagram, Ty shared the news with a celebratory photo of the couple, captioning the pic, “ If You know me you know I enjoy life. Work hard, Show Love and Live. I let stories run. Let the miserable complain. I’ve never had to put anyone else down to build up my own self esteem… “Anyone that looks to reproduce the past is not living in the present” Water your own grass, eat healthy and drink filtered water. Live. Laugh. Love… #Golden50 ” View this post on Instagram

“I knew it! I’m so happy for y’all congratulations!!!! ,” one fan wrote while another said, “My favs!!! Congratulations on your union ” While Mimi hasn’t announced the engagement on her own Instagram yet, she did take to the social platform to wish her boo a happy birthday, sharing a stunning photo of the two from last night’s big celebration. View this post on Instagram

Looks like this wedding will be on for the books! Congratulations to the happy couple! Don’t miss… Mimi Faust Is 50, Fabulous, And Clearly Aging Backwards #QuarantineLife: L&HH’s Mimi Faust And Boo Ty Young Give The Cutest ‘Messy Bun’ Tutorial

...and this is the kind of example you set for young girls that are coming behind you...!! Relationships like this are immoral, they are an abomination unto the Most High God our Creator! 🤮🤮🤮

Congratulations 🎊 be happy life is too short to have bs in your life. Wish you both the best 👌

Marlo Hampton Keeps It Cute In An All Peach Ensemble

Marlo Hampton took to Instagram recently to show off her all peach ensemble that was everything!
BEAUTY & FASHION・5 DAYS AGO
HelloBeautiful

Boss babe Supa Cent and her boyfriend Rayzor celebrated their one-year anniversary getting engaged in a romantic clip floating around social media.
RELATIONSHIPS・7 DAYS AGO
HelloBeautiful

Celebrities Sing Praises To Their Loved Ones On Mother’s Day

We don't often get a glimpse inside of our favorite celebrities' personal worlds, but on holidays like Mother's Day - they let us in.
CELEBRITIES・17 DAYS AGO
HelloBeautiful

Rasheeda Celebrated Her Birthday In An All-Designer Ensemble

Rasheeda took to Instagram to show off her fashionable birthday ensemble and we're obsessed!
RETAIL・1 DAY AGO

Person
Mimi Faust
The US Sun

RAY Liotta, the brilliant actor who made his name in Martin Scorsese's crime classic Goodfellas, has passed away. The star died in his sleep in the Dominican Republic, where he was filming Dangerous Waters, according to Deadline. There were no signs of foul play or anything suspicious about the death,...
CELEBRITIES・1 DAY AGO
HelloBeautiful

Kimora Lee Simmons and her daughter Aoki Lee Simmons were spotted out at the Dior fashion show donning fashionable looks from the powerhouse brand.
DESIGNERS & COLLECTIONS・4 DAYS AGO
HelloBeautiful

Lizzo took to Instagram to bare all while hitting her now viral dance challenge and it's everything!
THEATER & DANCE・21 DAYS AGO
Popculture

Chicago Fire's cast and crew is mourning the loss of one of their own. Just days ahead of the Wednesday night Season 10 finale, beloved canine sidekick and firehouse Dalmatian Tuesday died after working on the series alongside stars including Daniel Kyri, Jesse Spencer, Taylor Kinney, and more for the past four years.
TV & VIDEOS・1 DAY AGO

Kandi Burruss took to Instagram to show off her all-pink Halpern ensemble and it's everything!
BEAUTY & FASHION・20 DAYS AGO
HelloBeautiful

Tia Mowry Shows Off Her Brand New Braids On Instagram

Tia Mowry took to Instagram to show off her brand new braids and they are everything! The post Tia Mowry Shows Off Her Brand New Braids On Instagram appeared first on HelloBeautiful.
CELEBRITIES・13 DAYS AGO

Gabrielle Union Slays In A Sparkly Fendi By Versace Dress

Gabrielle Union took to Instagram to show off her sparkly Fendi by Versace dress and it's everything!
TOWN OF UNION, NY・17 DAYS AGO
HelloBeautiful

If Pretty in Pink were a person.
BEAUTY & FASHION・10 DAYS AGO
HelloBeautiful

Just when we thought boot season was over, Jordyn Woods blessed our Instagram feeds with some fierce $365 Diesel denim thigh-high boots.
APPAREL・22 HOURS AGO
HelloBeautiful

Monica Shows Off Her Natural Tresses And Flawless Skin

Mary J. Blige Honors Sisterhood With Her First-Ever Strength Of A Woman Festival

Mary J Blige, Kandi Burruss, Toya Wright, and more shine a light on the strength of a woman and the power of sisterhood.
ATLANTA, GA・17 DAYS AGO
HelloBeautiful