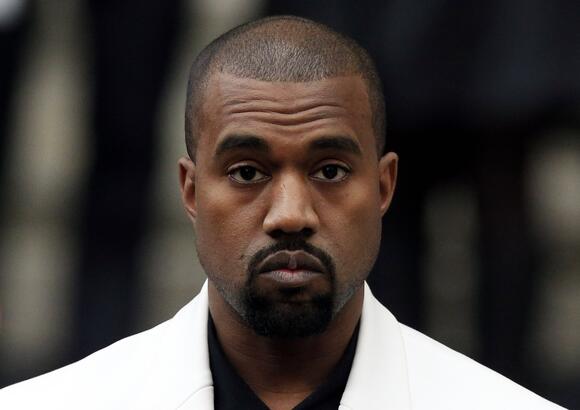 Actress Julia Fox has opened up about her fledgling romance with rapper Kanye West in a new interview complete with photos of the couple hanging out and kissing.

Explaining that she met 44-year-old West - who recently legally changed his name to Ye - on New Year’s Eve, she said that they had an "instant connection."

"We decided to keep the energy going and fly back to New York City to see Slave Play," the Uncut Gems star said of their second date in a piece for Interview magazine.

Fox says that, after seeing the play, she and West went to "one of my favorite restaurants," the NYC eatery Carbone. "At the restaurant, Ye directed an entire photo shoot for me while people dined!" she said. "The whole restaurant loved it and cheered us on while it was happening."

The surprises didn’t end there as afterwards he took her back to his hotel - to put clothes on!

“He had an entire hotel suite full of clothes. It was every girl’s dream come true. It felt like a real Cinderella moment. I don’t know how he did it, or how he got all of it there in time,” she gushed to the publication.

Reflecting on the future of the relationship, which she describes as “organic,” the mother-of-one said: "I don’t know where things are headed, but if this is any indication of the future I’m loving the ride."

It’s an odd move for West, who up until recently has been very vocal about his hopes of reconciling with estranged wife Kim Kardashian, 41, with whom he shares four children.

The teenager accused of the murder of 12-year-old Ava White has told a jury he was “scared” she would “jump” him. The 14-year-old, who cannot be named for legal reasons, told Liverpool Crown Court “I promise, I didn’t mean to hit her” as he gave evidence over videolink on Thursday.
PUBLIC SAFETY・2 DAYS AGO
newschain

A street gangster nicknamed Billy the Kid died in a hail of bullets during a revenge ride-out which ended in “crushing defeat”, a court has heard. Billy McCullagh, 27, suffered two shots in the back and died in a street in north-west London in the early hours of July 16 2020, jurors heard.
PUBLIC SAFETY・2 DAYS AGO
newschain

A High Court judge has set a timetable for decisions on the future of a 12-year-old boy who is at the centre of a treatment dispute after suffering devastating brain damage. Mrs Justice Arbuthnot has heard how specialists treating Archie Battersbee at the Royal London Hospital in Whitechapel, east London, think it “highly likely” he is dead and say life support treatment should end.
HEALTH・2 DAYS AGO
Hello Magazine

According to Tina Brown's new book, "The Palace Papers," Prince William was aware of his status as future king from a young age.
CELEBRITIES・25 DAYS AGO
The Independent

Laughter erupted in courtroom after Johnny Depp said he doesn’t watch his own movies and couldn’t recall the question he was asked. “I don’t watch them. I feel better not watching them. What was the question again?” Mr Depp said to laughter from the room. Johnny Depp trial – latest updates“Order in the court, or I will have you removed,” Judge Azcarate said. “Understood? Thank you.”The defamation trial between Mr Depp and Amber Heard began on Monday 11 April in Fairfax, Virginia following Mr Depp’s lawsuit against his ex-wife in March 2019. Mr Depp is arguing that she defamed him...
CELEBRITIES・26 DAYS AGO
Hello Magazine

Princess Eugenie has taken to her Instagram Stories to make an exciting announcement related to The Anti-Slavery Collective, which she co-founded with her best friend Julia de Boinville back in 2017. Resharing a message from the charity organisation, the mother-of-one revealed she was posting "news from my charity". WATCH: Princess...
CELEBRITIES・25 DAYS AGO
Hello Magazine

Hoda Kotb took to social media to show her support for her co-star and close friend Jenna Bush Hager as she embarked on a brand new adventure. The Today host shared a snapshot of her co-host's book tour schedule, which took her around the country to talk about her latest release with sister Barbara P. Bush.
CELEBRITIES・27 DAYS AGO

Click here to read the full article. It seems like everyone was rooting for Renée Zellweger and Ant Anstead to get together, including an unexpected duo: the Property Brothers. Drew and Jonathan Scott recently revealed that they were the ones that ended up getting Zellweger and Anstead to meet, and subsequently fall in love. And their hard work ended up paying off! Back on April 14, 2022, the Scott brothers sat down with ExtraTV to talk about everything from Drew’s upcoming fatherhood to Jonathan loving GF Zooey Deschanel’s Vanity Fair gown. While we loved the entire interview, we’re losing it over...
CELEBRITIES・27 DAYS AGO
Hello Magazine

The Today Show stars, including Hoda Kotb, Savannah Guthrie, and Craig Melvin, are reeling from the death of a beloved fellow Today host, one whose hiring onto the show made history at NBC studios. The co-hosts took a moment out of Monday morning's show to honor the legacy of Jim...
CELEBRITIES・26 DAYS AGO
People

Megan Fox wants her kids to express themselves however they please. In a wide-ranging interview with Glamour U.K. for their April cover story, the 35-year-old actress opens up about how she teaches her children, Journey River, 5, Bodhi Ransom, 8, and Noah Shannon, 9, about gender identity and encourages them to be confident in who they are.
FAMILY RELATIONSHIPS・25 DAYS AGO
TheStreet

Once again, Disney (DIS) - Get Walt Disney Company Report is finding itself embroiled in a political quagmire owing to its support of the LGBTQ community, after Florida Gov. Ron DeSantis punished Disney for denouncing his “Don’t Say Gay Bill,” by seeking to revoke Disney World’s designation as a special tax district (which as we pointed out, is ultimately a meaningless gesture).
FLORIDA STATE・25 DAYS AGO

GENERAL Hospital revealed a major character change is coming to the show this week as one of its stars battles health issues. There are often comings and goings happenings on soaps, and the latest cast switch-up involves longtime cast member Nancy Lee Grahn. Nancy, who turns 66 on Thursday, has...
CELEBRITIES・26 DAYS AGO
Popculture

90 Day Fiancé stars Anna-Marie Campisi and Mursel Mistanoglu have added a little boy to their family! The couple, who tied the knot on Season 7 of the TLC reality show, announced on Instagram this week that their son, Gokhan John, had been born via a surrogate on Monday, April 11 after the couple's initial struggle with fertility.
FAMILY RELATIONSHIPS・25 DAYS AGO
Popculture

Netflix has canceled another one of its major shows, with this one getting the ax after only two seasons. Variety reports that hit sci-fi drama Raising Dion has been dropped by the streamer, following its recent season debut. The news seems to have been revealed by series star Sammi Haney, who shared the news with fans on Instagram. "Sad to say that Raising Dion is CANCELED [sic] Thank you for all of the amazing support we got from all of our wonderful fans!" Haney wrote, in part. "Season 2 was a success, equal to Season 1, even if just looking at how many people watched all of it and wanted a season 3!"
TV SERIES・25 DAYS AGO
Hello Magazine

On Thursday evening, the Duchess of Cambridge had a show-stopping fashion moment at the premiere of Top Gun: Maverick in Leicester Square, London. Looking positively glorious alongside husband Prince William, the mother-of-three wore a glamorous Roland Mouret dress with a bardot neckline - a favourite of sister-in-law Meghan Markle. The dress was a black column style with a white band across the top that showed off her collarbones.
BEAUTY & FASHION・2 DAYS AGO
Insider

Depp said he discovered Disney would not recast him in "Pirates" days after Amber Heard's Washington Post op-ed article was published.
FAIRFAX, VA・26 DAYS AGO
Newsweek

"We divorced because Jim was a bad husband and not a great dad when we were together," she explained.
RELATIONSHIP ADVICE・25 DAYS AGO
hotnewhiphop.com

50 Cent cast doubt on Megan Thee Stallion's recent comments about not having been in an “intimate relationship” with Tory Lanez, prior to the infamous shooting in July 2020 which left her with gunshot wounds. Megan's comment came during a recent interview with Gayle King, during which she...
CELEBRITIES・25 DAYS AGO
Whiskey Riff

It’s no secret that Tim McGraw and Faith Hill loved their roles on 1883, as they’ve expressed their best experiences on the show, as well as their respect for their characters, James and Margaret Dutton. However, it appears that they have no intentions on reprising their 1883 roles...
CELEBRITIES・2 DAYS AGO