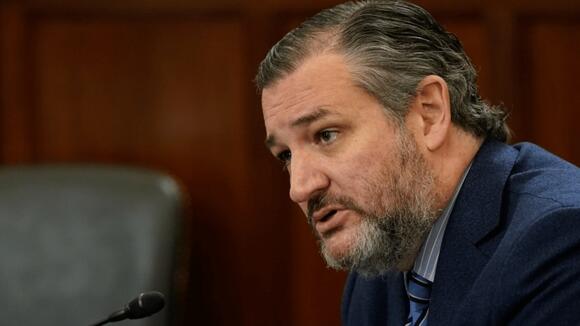 Ted Cruz on Thursday walked back his use of the word “terrorist” when describing the Jan. 6 attack on the Capitol during an intense back and forth with Fox News host Tucker Carlson, who repeatedly questioned the validity of the Republican senator’s explanation.

Cruz was lambasted during Carlson’s Wednesday night show for describing Jan. 6 as “a violent terrorist attack on the Capitol.” During his Thursday night appearance, when Carlson asked him why he used the word "terrorist," Cruz brushed off his previous phrasing as “sloppy” and “frankly dumb.”

But Carlson didn’t accept that answer, arguing that the attack was not terrorism and questioning Cruz's motivations.

“You told that lie on purpose, and I’m wondering why you did,” Carlson said.

Cruz, a potential 2024 candidate who has argued he is well-positioned for the Republican presidential nomination after finishing second behind Donald Trump in 2016, further attempted to defend himself.

“What I was referring to are the limited number of people who engaged in violent attacks against police officers. I think you and I both agree that if you assault a police officer, you should go to jail," Cruz said. "I wasn't saying the thousands of peaceful protesters supporting Donald Trump are somehow terrorists. I wasn’t saying the millions of patriots across the country supporting Trump are terrorists.”

“What you just said doesn’t make sense,” Carlson fired back, accusing the senator of playing into Democrats’ narratives. During the segment, the show's chyron read: “TUCKER TAKES ON SENATOR TED CRUZ.” (There have been murmurs that Carlson, too, might run in 2024 .)

While Carlson has highlighted Cruz’s comments twice this week, the senator’s use of the word is not new. The Texas senator released a statement after Congress reconvened to certify the election on Jan. 6 last year, calling the day a “despicable act of terrorism.”

The FBI defines domestic terrorism as “violent, criminal acts committed by individuals and/or groups to further ideological goals stemming from domestic influences, such as those of a political, religious, social, racial, or environmental nature.”

Cruz went on to remind Carlson that he was one of the Republican senators who objected to the 2020 presidential election results.

“So of course, it would be ridiculous for me to be saying that the people standing up and protesting to follow the law were somehow terrorists. I was talking about people who commit violence against cops,” Cruz said, adding that he's used the word to describe people who attack police officers for decades.

“That being said, Tucker, I agree with you. It was a mistake to say that yesterday, and the reason is what you just said, which is we have now had a year of Democrats and the media twisting words and trying to say that all of us are terrorists. Trying to say you are a terrorist, I am a terrorist.”

The back and forth continued for almost 10 minutes. At one point Carlson was exasperated, cutting Cruz off.

“I guess I just don’t believe you,” Carlson said. “And I mean that with respect.”

Plain and simple. (ANYONE) who engages in purposeful violence, damage of property, trespassing on government property Especially interrupting government officials from performing their sworn duty must be treated as a terrorist/ treasonous behavior and be put in jail for LIFE. END OF!!!

Oh mister has balls for a split second and gets scared and walks back any real comment he has ever made. Sis boy right there with Linsey Graham

Cruz, like Herschel Walker, must have multiple personality disorder! Which personality made the initial statement and which one rescinded that statement? Which one do you want representing you?

Rep. Marjorie Taylor Greene (R-GA) speaks to supporters of former U.S. President Donald Trump at the Banks County Dragway on March 26, 2022 in Commerce, Georgia. This event is a part of Trump's Save America Tour around the United States. (Megan Varner/Getty Images) On Monday, CNN's Andrew Kaczynski and Em...
COMMERCE, GA・20 DAYS AGO
POLITICO

Among the "no" camp: potential 2024 contender Sen. Josh Hawley (R-Mo.). Ukraine aid moves ahead: The Senate advanced a massive Ukraine ad bill by an 81-11 vote, putting it on track to clear the chamber later this week. The “no” votes came from fiscal conservatives who criticized the package as bloated and said its priorities were misplaced.
PRESIDENTIAL ELECTION・9 HOURS AGO
Daily Mail

Senator Lindsey Graham has said he was wrong to describe Joe Biden as 'the best person' to lead the country after the January 6 insurrection. Graham was recorded speaking to New York Times reporter Jonathan Martin on the day of the riot itself. Martin has written a new book with...
PRESIDENTIAL ELECTION・4 DAYS AGO
WashingtonExaminer

When President Joe Biden named Kamala Harris as his running mate, he promised his former campaign rival would be one of the most influential voices in the White House.
PRESIDENTIAL ELECTION・21 DAYS AGO

A legal effort to ban Marjorie Taylor Greene from standing for re-election has been given the go-ahead by a federal judge, who denied the far-right Georgia congresswoman’s attempt to have the case against her thrown out – paving the way for further proceedings by the end of this week.The news led Ms Taylor Greene to complain that “I have to go to court on Friday and actually be questioned about something I’ve never been charged with and something I was completely against.”Ms Greene, a hardline pro-Trump Republican who has long circulated false conspiracy theories, is accused by campaigners of...
CONGRESS & COURTS・27 DAYS AGO
WashingtonExaminer

EXCLUSIVE: A group of Republican senators is introducing legislation to block the Biden administration from sending personnel and funding from the Department of Veterans Affairs (VA) to alleviate the crisis at the southern border. The senators are alarmed by the Biden administration's announced termination of Title 42 on May 23,...
CONGRESS & COURTS・20 DAYS AGO
NBC News

MEXICO CITY — Mexican President Andrés Manuel López Obrador on Monday urged U.S. Latinos not to vote in November’s midterm elections for politicians who have “mistreated” them, in response to a comment by former U.S. President Donald Trump. Trump boasted at a rally in...
PRESIDENTIAL ELECTION・20 DAYS AGO

The intelligence the U.S. shared with Ukraine helped it continue to resist Russian invading forces and even shoot down a transport plane carrying hundreds of Russian troops, a new report revealed. According to current and former U.S. officials who spoke with NBC News on Tuesday, the U.S. provided critical intelligence...
MILITARY・20 DAYS AGO
POLITICO

Why the Jan. 6 panel bet its legal hand against the House GOP

There's no guarantee the subpoena of five GOP lawmakers will give the committee more information on former President Donald Trump's attempt to subvert the 2020 election. They're barreling ahead anyway.
CONGRESS & COURTS・4 DAYS AGO
Newsweek

The former president referenced scoring well on a cognitive test in 2018, which is designed to detect whether a person has early stages of dementia.
DELAWARE COUNTY, OH・22 DAYS AGO
Business Insider

The House has passed 19 bipartisan bills to aid Ukraine and counter Russia since the war began. Greene voted for just one, and Massie voted for none.
FOREIGN POLICY・2 DAYS AGO

Individual judges may not like the policy choices of the Biden administration, but it is not their job to weigh in on that policy debate.
TEXAS STATE・21 DAYS AGO
POLITICO

Biden starts conceding that the bygone era of D.C. may, indeed, be gone

Among his inner circle, there has been a hankering for sharper elbows.
PRESIDENTIAL ELECTION・1 DAY AGO
TheWrap

In a surprise to no one, Kimmel devoted much of his opening monologue on Monday’s “Jimmy Kimmel Live!” to roasting Marjorie Taylor Greene after the far-right congresswoman testified last week in a Georgia court about her role in the Jan. 6 Capitol riot. Kimmel — who was...
WASHINGTON, DC・21 DAYS AGO

Elon Musk could soon have a Trump-sized headache

If Musk’s offer to buy Twitter succeeds, he’ll inherit the content moderation challenges that come with a potential return of the rule-breaking former president.
POTUS・4 DAYS AGO
BuzzFeed News

Thomas Webster’s trial kicked off with dueling videos from the Capitol and competing theories of what they showed.
LAW ENFORCEMENT・20 DAYS AGO
POLITICO

‘We’re chewing people up’: The left fights back against primary attacks

For the Democratic Party’s left flank, this month’s primaries represent a potential pivot point, after a series of losses.
CONGRESS & COURTS・2 DAYS AGO