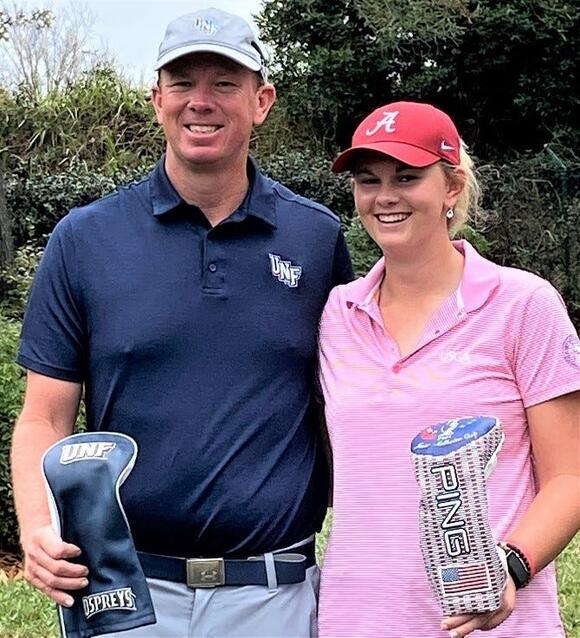 Kaitlyn Schroeder ended 2021 with a third Jacksonville Area Golf Association championship in a 12-month span — two of them with her father, University of North Florida golf coach Scott Schroeder.

The two shot 10-under-par 61 in a scramble format on Dec. 18 to win the Jacksonville Area Golf Association Family Championship gross division for the second year in a row, at the Jacksonville Beach Golf Club. They tied with Chet and Chester Stokes and then won a scorecard match for the title. Benjamin and Sam Ohno finished third, one shot out of the playoff.

Kaitlyn Schroeder, 16, has committed to play golf at the University of Alabama. She won the First Coast Women's Amateur Championship in June at the Sawgrass Country Club. 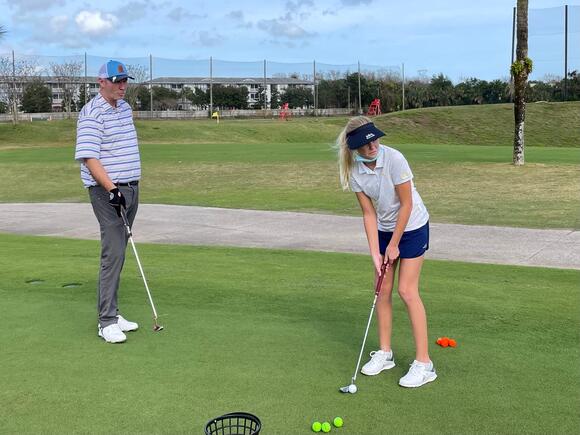 Danny and Will Eckles won the family net division with a 59, edging Jim and Annabelle Mozingo by two shots. Rick and Kelly Root won the couples gross division with a 62, nipping Tim and Debbie Peterson by one shot.

A sold-out field of 152 players competed in morning and afternoon waves featuring men and women, grandparents, parents, and youth from as young as eight-year-old Wynn McCann to several players in their 80s.

The tournament will return to Jacksonville Beach on Dec. 17, 2022.

Joe Monahan, the father of PGA Tour commissioner Jay Monahan, more than took advantage of the stellar weather for golf in Florida around the holidays.

Monahan, an attorney from Boston, played 54 holes in slightly more than 24 hours, in three settings on Dec. 17 and 18.

He first played with his son in the pro-am of the PNC Championship in Orlando, on the winning gross division team. The next morning he joined "The Munchkins," at the TPC Sawgrass for their usual Saturday game at the TPC Sawgrass Dye's Valley, where he shot his age of 78.

Monahan then made his afternoon tee time with Mike Charrie to play in the JAGA Family Championship.

His comment after three rounds in less than two days: "I'm headed for Topgolf."

The North Florida Junior Golf Tour will begin its Spring Tournament Series on Jan. 17 with the Ponte Vedra Open, at Marsh Landing. The tournament also will serve as a qualifier for the Notah Begay Junior National Championship.

The Jacksonville Area Golf Association 2022 season will begin Jan. 15-17 with the sixth First Coast Amateur, at The Conservatory at Hammock Beach.

The tournament will include 96 players representing 22 states, 17 countries and 34 colleges. This year's field will have a record number of players who are inside the top-2000 on the World Amateur Rankings. The final field was pared from a peak list of 177 players who applied.

The other highlights for the JAGA schedule will be the Match Play Championship April 29-May 1 at Jacksonville Beach; the 65th Senior Amateur May 15-17 at Deercreek; the First Coast Women's Amateur June 22-23 at the King & Bear; and the JAGA Amateur July 21-23 at Deerwood.

Matches will be held for 6 consecutive weeks with the leading teams in points advancing to the regional playoffs. The winner of regionals will compete in the finals at TPC Treviso Bay in Naples.