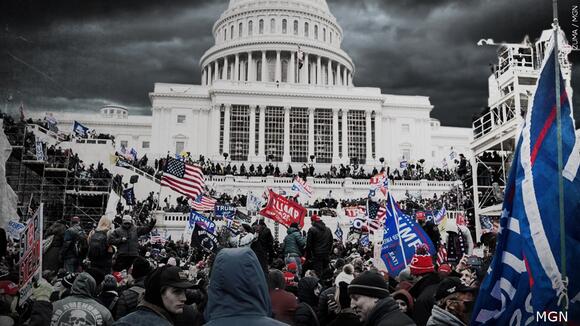 Those we spoke to expressed their frustrations with how the insurrection was handled, but also expressed hope for future unity - 13 On Your Side's Luis Lopez reports

YUMA, Ariz. (KYMA, KECY) - One year ago, the U.S. Capitol was invaded by many supporters of then-President Donald Trump in an attempt to overturn the results of the 2020 election. Yuma locals, like Walter Ashenfelter, look back at the events, still frustrated with what happened.

“I thought it was just a terrible, terrible day for the United States of America,” Ashenfelter said.

Ashenfelter still looks back on the riots in horror.He says as he watched everything unfold, he got more and more upset with how the situation was handled by Trump.

“I think he had a chance to do something, he was watching it unfold on TV and I think he was just taking great pleasure in seeing what was happening,” Ashenfelter said.

Yuma visitor Gloria Dagnino says she spent the entire day glued the events on her TV. A year later, she feels just as disappointed as when she first saw the events.

“I look back on that day horrified the same as when it happened, it’s so unbelievable that in this beautiful, wonderful country, something so ugly could happen,” Dagnino said.

Plenty of locals also talked to us off-camera, saying they felt just as frustrated. Including supporters of trump, who still say they support him but feel he could have handled the situation much better.

As immigrants continue to cross into our area, one local organization is helping to ease the burden for others. Over at the Regional Center For Border Health, buses transporting immigrants have been departing since January of this year. The post Local non-profit speaks out on helping transport immigrants appeared first on KYMA.
YUMA, AZ・23 HOURS AGO
KYMA News 11

As the nation continues to process this horrific shooting, local lawmakers are voicing their concerns. Some local leaders say they're actively trying to come up with solutions to tackle school shootings, but some wonder why more hasn't already been done. The post Local lawmakers react to Uvalde, Texas school shooting appeared first on KYMA.
YUMA, AZ・1 DAY AGO

The Palomino apartments in Brawley saw its grand opening on Thursday morning. The 60-unit housing community will serve families and farm workers and those who are low income. The post Affordable housing comes to Brawley appeared first on KYMA.
BRAWLEY, CA・1 DAY AGO
KYMA News 11

To some people a stuffed animal is nothing more than stuffing and stitching. But, to children in distress, that toy could bring a little peace. The post Synergy HomeCare – Local group seeks to help an unbearable situation appeared first on KYMA.
YUMA, AZ・1 DAY AGO

Because of a federal court ruling, Title 42 did not expire on May 23 but that news may not have reached all asylum seekers. The post Migrants continue to seek asylum at Yuma border appeared first on KYMA.
YUMA, AZ・4 DAYS AGO
KYMA News 11

Leaders across the Imperial Valley are divided over the status of Title 42 as it was set to expire on May 23, some are ready to move forward, while others think it's too soon. The post Imperial County looks beyond Title 42 appeared first on KYMA.
IMPERIAL COUNTY, CA・4 DAYS AGO

Historic drought conditions are impacting critical infrastructure that provides water and power to the region, like the Hoover Dam, and Lakes Mead and Powell. The post Southwest water shortage expected to get worse appeared first on KYMA.
YUMA, AZ・2 DAYS AGO
KYMA News 11

Two men in custody at the Yuma County Jail will have their cases pick back up in full swing after a lull in the process due to changes in their attorneys. The post Cases resume for two local suspects who find new attorney representation after change in counsel appeared first on KYMA.
YUMA COUNTY, AZ・5 HOURS AGO
KYMA News 11

It’s that time of year when Arizonans have a chance to try and be the first millionaire of 2022. The post EXCLUSIVE: 2022 Million-Dollar Powerball Drawing interview appeared first on KYMA.
YUMA, AZ・2 DAYS AGO
KYMA News 11

Temperatures are heating up so we can expect many more hot days in the triple digits that’s why Governor Doug Ducey proclaimed today as the first day of Heat Awareness Week.  The post Heat Awareness Week appeared first on KYMA.
YUMA, AZ・4 DAYS AGO

Arizona is currently in its 27th year of a long-term drought so saving any drop of water is becoming even more valuable. The post SPECIAL REPORT: What the current water shortage means for Yuma’s water appeared first on KYMA.
YUMA, AZ・2 DAYS AGO
KYMA News 11