Costco & ShopRite recall: If you bought these delicious desserts, throw them out 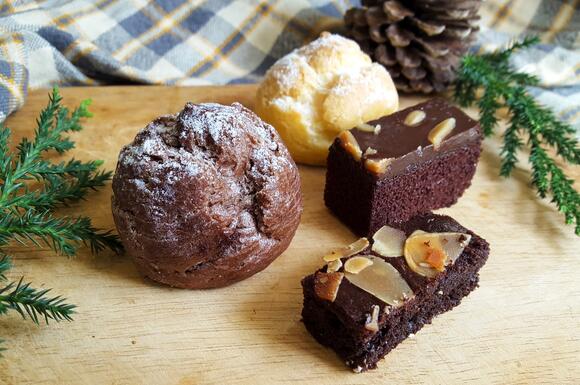 If there's one time of the year when you're most likely to abuse desserts and sweets, it has to be the final weeks of December and the beginning of January. No matter how big your Christmas and New Year's Eve parties might be, desserts probably have a prominent placement at the dinner table. Plus, after those are done, you definitely will have leftovers that you need to get out of your fridge before your diet can begin. But you should still pay attention to what sort of desserts you consume , as there are a few recalls in action that you should be aware of. One of the latest ones involves Poppies International products that were available at Costco and ShopRite stores in December. The second involves certain lots of Dianne's Fine Desserts's Chocolate Decadent Brownie. The former might contain traces of metal, while the latter includes pecan, but the ingredient is undeclared on the package.

Poppies International announced on December 28th of last year a recall of select Delizza Cream Puffs products that might contain traces of metal. The US Food and Drug Administration (FDA) published the press release a day later.

The company produced the desserts in the recall between December 7-10, 2021. During production, it discovered the presence of small metal fragments. The products were sold by Costco, ShopRite, PriceRite, and Safeway locations in various states as follows:

The following lot codes are part of the Costco dessert recall:

Poppies International says that no injuries or incidents were reported in connection to the recalled items.

Also, on December 28th, Dianne's Fine Desserts announced a recall of 1,480 trays of Sienna Chocolate Decadent Brownies that contain pecan. A problem during production resulted in the company packing the brownies inside packages that do not list pecan.

The ingredient is a potential allergen that can cause life-threatening allergic reactions. Unlike the Costco dessert recall above, the Dianne' Fine Desserts brownies are safe to eat if you don't have an allergy to pecans.

However, you should pay attention because this can be a serious issue. Serving the brownies to guests could cause serious harm unless you're sure they don't have pecan allergies.

The Chocolate Decadent Brownies in this recall were available from Gordon Food Service in the following states: Wisconsin, Michigan, Florida, Ohio, and Pennsylvania. You'll have to look for lot code 6Z1L24 on the top label of the tray to determine whether or not the brownies you have at home are part of this dessert recall.

Dianne's Fine Desserts initiated the recall after a consumer complained about the presence of pecans in the brownies. The company said has not received any reports of illnesses to date.

The recall might be more limited than the Costco desserts recall above. But if you've been traveling for Christmas in these states, you might still be exposed to these desserts.

If you bought any of the Delizza desserts from the Poppies International recall, you should stop consuming them. You should return the product to the place of purchase for a full refund, whether it's Costco, ShopRite, PriceRite, or Safeway. Alternatively, you can simply throw them away if you don't plan to make the trip and return them.

More information about that recall is available over at the FDA — see this link .

If you have Dianne's Fine Desserts from the lots in the recall, you should discard them or return them for a full refund. The full press release is also available on the FDA website .

Not the only holiday recall from 2021

While you may be worried about the desserts recall, there have been other recalls recently. At Target, there has been a huge recall on a decorative mailbox for “Letters to Santa.” This has caused lacerations on people's hands. Target is advising those who have purchased it to return it to the store for a full refund via gift card.

There has also been a recall on Kroger-brand ground beef . There has been a trace of one string of E. coli found in certain packages. Very cold temperatures do not kill this kind of bacteria, so if you have it in your freezer, It needs to be thrown away.

The post Costco & ShopRite recall: If you bought these delicious desserts, throw them out appeared first on BGR .

Whenever customers or manufacturers discover traces of foreign objects in food and drinks, recalls promptly follow. These can be particles of glass or metal that ended up in the goods during manufacturing. Consuming them can lead to injuries. That’s why you should always avoid any food or drink that might contain traces of metal or glass. With that in mind, you should make sure you don’t eat the Smithfield Packaged Meats Corp ready-to-eat (RTE) bacon topping from this new recall. These meat products might contain metal, which can obviously harm you if you eat it.
1 DAY AGO
BGR.com

Huge chocolate recall: If you have any of these 18 chocolates, throw them out now

J. M. Smucker Co. announced a massive JIF peanut butter recall a few days ago. The action covers 49 JIF varieties due to the detection of Salmonella, a dangerous bacteria. It turns out the JIF recall has another side effect. The Coblentz Chocolate Company just announced a massive recall of peanut butter chocolates that are tied directly to the JIF products.
ECONOMY・3 DAYS AGO
The US Sun

TIME is fast running out for Americans to receive a one-time $1,000 cash payout. There are only six days left for some qualifying US residents to apply for rebates and economic aid available as early as this summer, even if they did not file an income tax return. The New...
PERSONAL FINANCE・3 DAYS AGO

It's Not Just Jif: 7 More Brands Affected By Jif's Major Recall. Here's What & Why

Last week, the U.S. Food and Drug Administration (FDA) announced a recall of certain products manufactured by the Jif peanut butter brand after 14 people in 12 states became ill from salmonella poisoning which was linked back to the J.M. Smucker Company facility in Lexington, Kentucky, where Jif peanut butter is manufactured.
LEXINGTON, KY・1 DAY AGO
Daily Mail

In another setback for the budding, yet controversial, telehealth mental health company Cerebral, it now will no longer have its prescriptions filled by CVS and Walmart - two of the largest retail pharmacies in America. It has been a turbulent month for the San Francisco, California-based, company so far, with...
ECONOMY・1 DAY AGO
BGR.com

We’ve got more bad news for peanut butter fans. After the Skippy recall from early April, you should be aware of a massive JIF peanut butter recall. The company has recalled 49 different types of JIF peanut butter after discovering traces of Salmonella during testing. That’s a bacteria that health agencies routinely test for, as it can cause severe illnesses that can be fatal in some groups of people.
FOOD SAFETY・5 DAYS AGO
GOBankingRates

May is almost here, and millions of households are looking forward to their next SNAP payments. See: Surprising Things You Can Buy With Food StampsFind: SNAP 2022 -- Is My State Giving Out Extra Money...
AGRICULTURE・7 DAYS AGO

We're rethinking our lawn design (and you should, too)

If bright yellow dandelions and purple clover are popping up on lawns that usually look like carpet, or it's eerily quiet on your street on a Saturday afternoon when you would otherwise hear the humming of lawn mowers, there's a chance that your neighbors are participating in the No-Mow May campaign.
GARDENING・35 MINUTES AGO
BGR.com

Memorial Day 2022 is here and the BGR Deals team dug through all of Amazon’s best deals to highlight the hottest ones you can get this year. It obviously should go without saying that there are plenty of great local sales happening all across the country today as well. Considering everything small business owners have been through over the past year and a half, you should definitely try to support some local privately-owned stores today.
SHOPPING・4 HOURS AGO
BGR.com

Do you cringe every single time you have to clean your pool? Well, trust us when we tell you that you’re definitely not alone. That’s why you need to check out a pair of the best pool cleaner robot deals on Amazon. Having a pool in your backyard...
RETAIL・2 DAYS AGO