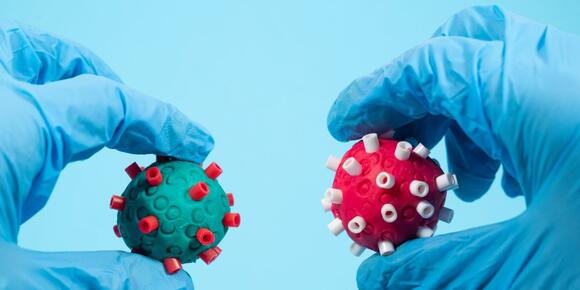 Never miss a story: Follow your favorite topics and authors to get a personalized email with the journalism that matters most to you.

When news broke that an unvaccinated pregnant woman in Israel tested positive for both the coronavirus and the common flu at the same time earlier this week, it sent shock waves through the medical community and introduced a new term into the COVID-19 lexicon: “Flurona.”

On Wednesday, the first reported incident of flurona since the term became popular showed up in the U.S., where an unvaccinated teenager in Los Angeles tested positive for both COVID and the flu, marking flurona’s official arrival in the U.S. However, there were other reported instances of flurona before that.

Here’s how the latest public health threat is impacting patients around the world.

The term refers to patients suffering from both COVID-19 and the common flu either simultaneously or back-to-back.

Flurona is not a distinct disease, or even a combination of the two diseases, but simply the word used when a patient contracts both viruses at the same time.

And while the term may be new, the bigger-picture confluence of both respiratory infections within the U.S. population has been happening for years. Health experts have been warning about the possibility of a “twindemic,” a scenario in which spikes in cases of COVID-19 and a simultaneous rough flu season overwhelm the country’s hospital systems, since early on in the pandemic. Instances of Americans testing positive for both COVID-19 and the flu have been reported as early as February of 2020, according to The Atlantic.

Why is flurona happening now?

Even before there was a buzzy name for it, flurona had been detected in different pockets around the world in recent weeks, including in Israel, Brazil, the Philippines, and Hungary. In the U.S., other instances of people who have tested positive for both the flu and COVID at the same time have been reported in Houston and South Florida.

Health experts say the arrival of flurona cases may be attributed to the massive surge in Omicron cases, as the variant currently accounts for 95% of the country’s COVID infections.

—the nation is averaging more than 585,000 new reported infections daily, a 254% increase compared with two weeks ago—comes during the heart of flu season in the U.S. and abroad.

And while last year’s flu season was the least harmful in more than a decade, experts warned Fortune in October that the possibility of the flu’s resurgence in the new year could be drastic, in part because fewer cases in the 2020–21 flu season caused “a reduced population immunity” that leaves the general public even more vulnerable to the flu this year.

While it is too early to say if those experts were right, the CDC has reported an increase in common flu cases compared with last year in the U.S., most notably among young adults and children.

This resurgence, coupled with a surge in Omicron, means the potential for an increased number of flurona cases is possible.

What are the symptoms?

The common flu and COVID-19 have always had similar symptoms, including a cough, runny nose, sore throat, fever, headache, and fatigue.

People may have varying levels of illness from either COVID-19 or influenza, ranging from no symptoms at all to severe and potentially fatal reactions, according to the World Health Organization.

There is little data so far on specific symptoms reported by flurona patients. In Los Angeles, the teenager who tested positive for both illnesses reported “mild symptoms.” In Israel, the unvaccinated pregnant woman was reportedly “very sick,” although she has since recovered.

However, experts say catching both COVID and the flu at the same has the potential to produce a more severe reaction, but as is the case for either one, a patient’s severity of illness varies and depends largely on an individual’s immune system and, perhaps most important, whether or not they have been vaccinated against both diseases.

How can I avoid it?

Health experts and public health officials are urging Americans to get vaccinated and boosted against COVID, which limits the possibility of a severe reaction. And as more and more Americans continue to contract the common flu, experts are emphasizing the importance of getting an annual flu shot.

In addition, public health officials stress a crucial way to avoid catching either disease is to wear a mask in public spaces, and continue to adhere to social distancing requirements.

Everyone is really pointing out unvaccinated people but when a vaccinated person died or gets sick, there is zero article about it. Propaganda at its finest.

In other words, the flu that had magically disappeared 2 years ago has suddenly magically reappeared. Plot twist, the covid tests are too sensitive and detect flu. OH, WAIT….

flurona? seriously? GTFO! it's just another flu virus & the minute you get to the hospital, it's escalated to corona virus so hospitals can profit off of hooking one up to a respirator which basically is suffocating those who are literally drowning in their own body's fluid. Just something to think about.

The U.S. is in a fifth COVID wave, and for many, immunity is waning. Why aren’t second booster vaccines available to all Americans?

Sign up for the Fortune Features email list so you don’t miss our biggest features, exclusive interviews, and investigations. To boost again or not to boost again. That is the question—for some, at least. A second COVID booster currently isn’t an option for most Americans. When asked by...
PUBLIC HEALTH・3 DAYS AGO
Fortune

A Harvard economist says the economy looks bad right now, but a recession isn’t a sure thing. It all depends on these 2 factors

Sign up for the Fortune Features email list so you don’t miss our biggest features, exclusive interviews, and investigations. These days, the economy seems to be on pins and needles. Stocks are crashing, investors are jittery, and voices continue to murmur that a recession is nearly upon us. Things...
BUSINESS・4 DAYS AGO
Fortune

Sign up for the Fortune Features email list so you don’t miss our biggest features, exclusive interviews, and investigations. Shanghai’s 25 million residents have endured an extreme COVID lockdown for nearly a month—and now a new nightmarish topic is trending on Weibo, the country’s Twitter-like social media platform.
PUBLIC HEALTH・21 DAYS AGO
The US Sun

ANOTHER batch of stimulus checks worth up to $1,200 is set to go out to thousands of Americans this month. Under California’s Golden State I (GSS 1) and Golden State Stimulus II (GSS II) programs launched in 2021, eligible residents are getting up to $1,100 and $1,200 respectively. In...
CALIFORNIA STATE・28 DAYS AGO

Walking at a brisk pace for just 75 minutes every week could cut your risk of depression, a new study finds. The World Health Organization recommends everyone should exercise for at least two-and-a-half hours every seven days. But researchers at Cambridge University, England, found adults who got half as much...
FITNESS・21 DAYS AGO
The US Sun

MILLIONS of Brits have been urged to take up a rapid test to see if they have bowel cancer. The Health Secretary has called on men over 60 to make sure they have the life-saving checkups. It couldn't be easier - with a home testing kit on offer, or use...
CANCER・22 DAYS AGO
Business Insider

Common supplements, such as St. John's wort, calcium, and iron, can reduce the efficacy of certain drugs, like antibiotics and antiviral medication.
LOS ANGELES, CA・5 DAYS AGO

Though helpful for cleaning and disinfecting, Lysol contains a number of harmful chemicals that can irritate your eyes, skin, and respiratory system.
HEALTH・20 DAYS AGO
Business Insider

The intelligence the U.S. shared with Ukraine helped it continue to resist Russian invading forces and even shoot down a transport plane carrying hundreds of Russian troops, a new report revealed. According to current and former U.S. officials who spoke with NBC News on Tuesday, the U.S. provided critical intelligence...
MILITARY・20 DAYS AGO
Fortune

‘If you’re eligible, can you wait?’ The CDC is saying to think again about a second COVID booster. Is it rationing vaccines?

Sign up for the Fortune Features email list so you don’t miss our biggest features, exclusive interviews, and investigations. The government wants you to wait on getting that fourth vaccine shot, and it won’t say exactly why. Americans eligible for a second COVID booster shot—including those 50 and...
PUBLIC HEALTH・3 DAYS AGO

The poster offered a solution for what someone should do should they see someone in the restroom they don't think matches the sign on the door.
RELIGION・21 DAYS AGO
Salon

A plethora of downright bizarre scientific research from the Department of Defense previously kept under wraps has been uncovered, revealing an array of peculiar schemes proposed by the United States military. One outlandish proposal suggested detonating nuclear bombs on the moon to create a tunnel through it. Millions in taxpayer dollars were spent on the research, which appears to have relied on a contractor, Bigelow Aerospace Advanced Studies, which was owned by multi-millionaire Robert Bigelow, a hotel impresario. The public was kept in the dark until now regarding what research was being funded.
ASTRONOMY・20 DAYS AGO
Business Insider

The former F-35 test pilot Billie Flynn told The Aviationist that moving to the "cosmic spaceship" that is the F-35 was too much to ask of MiG pilots.
AEROSPACE & DEFENSE・21 DAYS AGO
One Green Planet

Sign up for the Fortune Features email list so you don’t miss our biggest features, exclusive interviews, and investigations. China suffered a second aircraft disaster in as many months on Thursday, when a Tibet Airlines plane burst into flames after veering off the runway during takeoff. Videos posted online...
AEROSPACE & DEFENSE・5 DAYS AGO
Fortune

Sign up for the Fortune Features email list so you don’t miss our biggest features, exclusive interviews, and investigations. U.S. tariffs on Chinese imports survived a change in administration, but the trade-war-era levies may not survive record inflation. “We’re certainly looking at where we see costs being raised and,...
PRESIDENTIAL ELECTION・20 DAYS AGO
Fortune

Sign up for the Fortune Features email list so you don’t miss our biggest features, exclusive interviews, and investigations. Jeff Bezos' father was 16 when he fled to the US from Cuba after Fidel Castro took power. Last week, a tearful Bezos remembered this challenging account at the Statue of Liberty - Ellis Island Awards.
U.S. POLITICS・3 DAYS AGO