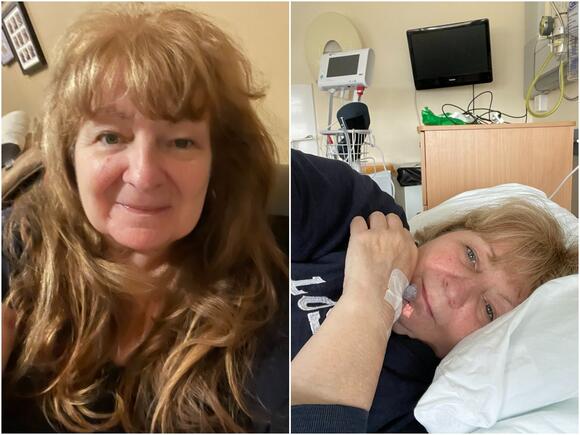 Comedian Janey Godley is recovering after having a full hysterectomy to treat her ovarian cancer , her daughter has said.

In November, Scottish stand-up Godley shared a photo to Twitter from her hospital bed as she announced that she had been diagnosed with the cancer .

On Wednesday (5 January) night, Godley tweeted that she was spending her “last night with my womb” ahead of the surgery.

“We are having a pre op ‘hen party’,” she joked. “I have been drawing Fallopian tubes on cards and pin the tumour on the ovary, we’re having cocktails of flat water and tomorrow at 7am I am off - thank you Scottish NHS and everyone here for lifting me up.”

After Godley received many well wishes from fans, her comedian daughter Ashley Storrie took over her mum’s Twitter on Thursday, confirming that the operation had gone “relatively well”.

“Mum is out of surgery and is in recovery,” Storrie wrote.

“Her time in the operating theatre went relatively well, and a full hysterectomy was achieved. Bunty has left the building. Thank you so much for all your kind words, positive thoughts and prayers.”

Godley was forced to cancel the remaining shows of her comedy tour in November after being diagnosed with ovarian cancer while on the road.

A Texas woman who cut a baby from her pregnant friend’s womb to cover up her own fake pregnancy now faces the possibility of execution. Taylor Rene Parker, 29, was found guilty of capital murder in the death of Reagan Michelle Hancock, as well as her unborn daughter Braxlynn Sage Hancock. More than 60 witnesses took part in the trial over the course of three weeks. On Monday, the jury deliberated for an hour before handing down its ruling, according to the Texarkana Gazette. Jeff Harrelson, a lawyer for the defence, attempted to get a kidnapping charge dismissed by...
TEXAS STATE・2 DAYS AGO
The Independent

The mother of Jessica Lawson has said her family “stand proud and united” after three teachers were cleared of the equivalent of manslaughter by gross negligence in a French court.Paying tribute to her daughter on Facebook, Brenda Lawson said the 12-year-old is “my baby girl”, adding: “No court in any land can take that away from me… ever.”Jessica died after a pontoon capsized in a lake near the city of Limoges while she was on a school trip in July 2015.At the Palais de Justice in the French town of Tulle on Wednesday, Steven Layne, Chantelle Lewis and Daisy Stathers...
FAMILY RELATIONSHIPS・20 HOURS AGO
The Independent

The Duchess of Sussex has discussed the stigmas faced by East Asian women in the latest episode of her Archetypes podcast. Following a brief hiatus due to the death of Quen Elizabeth II, the podcast returned with guest appearances from comedian Margaret Cho and journalist Lisa Ling. Meghan said that...
CELEBRITIES・2 DAYS AGO
The Independent

Fans of the royal family have been stunned by the “striking familial resemblance” between photographs of the Queen Mother as a child and her great-great granddaughter, Princess Charlotte of Wales.Pictures of the late Queen Mother from the archives of Glamis Castle in Scotland were revealed on the historic site’s Instagram and Twitter accounts on Monday (3 October).One photo shows the young Lady Elizabeth Bowes Lyon sitting against a stone wall in a wide brim hat and a white dress, while the second is a portrait of her holding a stalk with flowers.The castle’s social media team also posted a...
CELEBRITIES・2 DAYS AGO

Mother of girl, 12, expected teachers to have ‘integrity’ after pontoon death

The mother of a 12-year-old girl who died after becoming trapped under a pontoon on a school trip said she expected the teachers accused of causing her death to have “respect and integrity”.Brenda Lawson told a French court her family had been through “torturous suffering” since her daughter Jessica’s death near Limoges in 2015.She also criticised the response from the UK and Wolfreton School to Jessica’s death, saying they “did not provide us with any answers or help in any way”.Asked to describe the schoolgirl on Tuesday, Mrs Lawson told the court: “To describe Jessica is easy really.“We use the...
PUBLIC SAFETY・2 DAYS AGO
The Independent

House of the Dragon star Olivia Cooke has candidly revealed that she experienced a "full mental breakdown" six years ago.The actress, who stars Alicent Hightower, the daughter of King Viserys I Targaryen’s righthand man in the Game of Thrones prequel, told The Guardian about her past mental health struggles. “It was bad, bad. Awful, actually... I was working all the way through. I was very good at hiding it," Ms Cooke said.Click here to sign up to our newsletters.
MENTAL HEALTH・2 DAYS AGO
The Independent

Vicky McClure and the Our Dementia Choir have announced their debut single which they hope will show patients “are more than their diagnosis”.The Line Of Duty actress, 39, recorded What’s Your Story? with the Nottingham-based musical group at the famous Abbey Road Studios in north London, the first dementia choir to do so.They first performed the single at the April launch event for the Power Of Music report which looked at how music can support staff, create savings and generally improve healthcare services.McClure, who also stars in ITV series Trigger Point, said: “I couldn’t be prouder of every single person...
MUSIC・7 HOURS AGO
The Independent

Mental health experts on the one thing they wish everyone knew

Taking care of our wellbeing is a lifelong endeavour – for both our bodies and our minds – and it won’t look the same for everyone.But if mental health professionals could share just one nugget of wisdom with us all, what would it be?Saying no does not make you selfish“For some of us, saying no can be really hard. It might fill us with feelings of guilt, or even thoughts about being selfish. But the reality is, there’s nothing selfish about saying no,” says Gemma Campbell, counsellor and clinical content specialist at Kooth (work.kooth.com). ...
MENTAL HEALTH・52 MINUTES AGO

Voices: My wife is a sickle cell carrier – she was ready to end things after the second date if I was, too

As second dates go, it was hard to top an exhibition at Kew Gardens: amazing flower display, beautiful grounds, a little bit of ice cream with great company – it was a dream. Before it ended, I was already planning dates three and four; but nothing could put the brakes on like the text that followed a few days later from my (then) love interest and (now) wife. “Do you know if you have sickle cell trait?” Were we branching onto a deep philosophical conversation? Was this an educational moment, or was some shocking revelation coming? I responded “no,...
RELATIONSHIP ADVICE・23 HOURS AGO