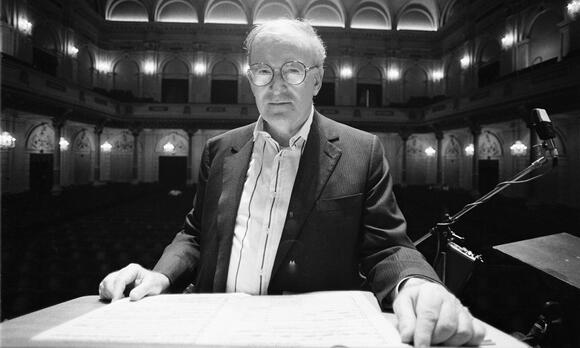 In the decades after the second world war it was the music of Anton Webern , rather than that of his teacher Arnold Schoenberg , that provided the starting point for the revolution launched by the composers of the European avant garde. Yet despite its influence, Webern’s slender output was rarely performed then, and even more rarely recorded. It did not become more widely accessible until the American conductor Robert Craft directed this series of recordings, made in Los Angeles between 1954 and 1956, using an unidentified orchestra made up, presumably, of Hollywood session musicians, and west coast-based soloists, including the soprano Marni Nixon and pianist Leonard Stein .

Craft now is best remembered as Igor Stravinsky ’s assistant, author of the books of their conversations and credited with encouraging the composer to adopt serial techniques in his later years. But his Webern recordings proved hugely influential; for those of us growing up in the 1960s and 70s, Craft’s LPs provided almost the only way of getting to know these jewel-like works, until in 1979 Pierre Boulez released the first of what would be his two complete surveys.

Craft launched a second series of Webern recordings in 2009 for Naxos, left unfinished at his death, while until this reissue his pioneering efforts from more than half a century earlier had never been transferred to CD. The set includes all the works with opus numbers, as well as Webern’s iridescent orchestration of the Ricercar from Bach’s Musical Offering and just one of the early, pre-opus pieces, the Piano Quintet of 1907 – just under three hours’ music altogether. ( The second of Boulez’s surveys, released in 2000 and running to six discs, includes much more of the “prehistoric” music, though by no means all of it.)

There’s no doubt that Webern interpretation has moved on since Craft made these discs, not only thanks to Boulez’s work, but through recordings by other conductors (especially Karajan , Sinopoli and Dohnányi) too. The cool, rigorous beauty and impacted lyricism they reveal in this music can only be sensed occasionally in these performances. It’s all too obvious that this music was terra incognita to these musicians; there’s a dogged caution and lack of expression in much of the playing and singing, not helped by the dryness of the recording. But in the orchestral works Craft shows that he at least understands what the essence of Webern’s music is; in the Passacaglia Op 1, the two sets of orchestral pieces, Op 6 and Op 10, and the Variations Op 30, the raw-edged fierceness and cut-glass precision seem authentic. But it’s more an issue of historical than of musical significance; the limitations in the performances of the smaller-scale works make this a set for specialists. Those looking for a Webern survey for their collection should opt for one of the Boulez sets.

Art Ensemble of Chicago: The Sixth Decade From Paris to Paris review | John Fordham's jazz album of the month

A live set celebrating the group’s 50th anniversary loops in a 20-piece orchestra, rousing poetry and new improvisers among the hardcore veterans
5 HOURS AGO
The Guardian

Royal Welsh College of Music and Drama, CardiffThere was rich variety to this programme of settings of ancient Chinese poetry by 15 composers, from Peter Warlock’s ‘whispering farewell’ to Pavel Haas’s tender lament
3 HOURS AGO
The Guardian

The folk musician strips her music back to the bones, amplifying the emotional intensity in a cosy firelit space
VERMONT STATE・3 HOURS AGO
The Guardian

Taking part in a trial shift to help coma patients wake up, the tension grows as it slowly becomes clear why you’re really mining strangers’ secrets
2 HOURS AGO
The Guardian

Couple missing with newborn baby may have been sleeping rough, police fear

Colbert on classified documents: ‘No one in executive branch has ever purchased a shredder?’

Stephen Colbert tried to get a handle on the slowly unfolding story of classified documents found in Biden’s private offices, after another six were discovered on Friday. “How could American be $31tn in debt and yet apparently no one in executive branch has ever purchased a shredder?” The Late show host wondered on Monday evening.
FLORIDA STATE・2 DAYS AGO
The Guardian

After repeating ‘fake news’ about Hasna Aït Boulahcen’s role in the Paris attacks, Dina Amer switched from journalism to directing – to uncover deeper truths about this tragic misfit
1 DAY AGO
extratv

Lance Kerwin, who became a teen heartthrob as the titular star of the coming-of-age drama series "James at 16," died Tuesday. He was 62. In a Facebook post, his daughter Savanah Kerwin wrote, "I am so sorry to those we have not been able to reach out to personally to notify but Lance Kerwin passed away yesterday morning. We appreciate all the kind words, memories, and prayers that have been shared. As the coming weeks progress, I will share more information about after life ceremonies."
HAWAII STATE・1 DAY AGO
The Guardian

Politicians, campaigners and UN special rapporteur concerned by case of Isla Bryson, who offended before she had transitioned
1 DAY AGO
The Guardian

A moment that changed me: three schoolboy truants convinced me to become a teacher

The day I attended my interview for a job teaching at a challenging north London comprehensive school hadn’t begun in a particularly surprising way. I knew the score: prospective teachers are expected to take a lesson, then are given a tour of the school by student prefects and, finally, interviewed by the headteacher. It wasn’t until after I’d completed my morning teaching that things started to take an unconventional turn.
2 DAYS AGO
The Guardian

Volodymyr Zelenskiy is finally getting the help he wants, but it places more of Ukraine’s future in US hands, says Guardian columnist Martin Kettle
WASHINGTON STATE・1 DAY AGO
The Guardian

Teresa Maher’s son, Kyle, was killed by Richard Wilson-Michael in supported accommodation in London in 2017
2 DAYS AGO
The Guardian