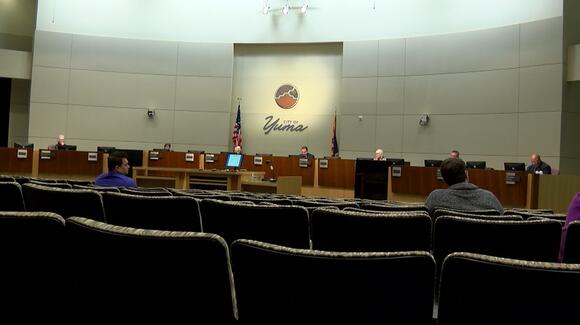 YUMA, Ariz. (KYMA, KECY) - The Yuma City Council held its first public meeting of the new year. On the agenda, something that affects everyone walking in downtown Yuma.

Elected officials are talking about potential changes coming to the downtown area. The goal is to create more walking space for visitors.

These areas are near Da’ Boys, Prison Hill, and The Pint House, just to name a few.

When businesses reopened a few months into the pandemic, in 2020, council members passed an ordinance allowing businesses to extend patios out to sidewalks.

Well, that cut into walking space for sidewalk traffic.

During the last city council meeting, a new idea was introduced, but Mayor Doug Nicholls added a caveat.

“A venue like Main Street is about being with people and experiencing Main Street together and if you're walking single file through two or three businesses, that character starts to get eroded.”

“It would definitely not be a major change it would I think right now three and a half feet the current ADA width required I'd be looking something closer to five or six feet."

The rest of the council agreed.

At Wednesday's meeting, the council unanimously passed the ordinance.

Businesses with outdoor dining will now have to make sure the walkway is at least five feet wide.

We’ve reached out to a few but many had not yet heard about it.

Along with that, some schools in Yuma will be getting a security upgrade.

“It alerts throughout the campus, alerting visitors who are approaching the campus that the school is on lockdown to vacate the premises and alert 911,” Dale Ponder with Crane Elementary School District No. 13 said.

The council passed an agreement between the Yuma Police Department and Crane School District as school officials look to find ways to keep students safe on campus.

“YPD is then able to pull up our information, take a look at our cameras to be able to see what is happening within our campuses,” Ponder added.

With the New Year comes new appointments to council and committee positions including Deputy Mayor Leslie McClendon, who will serve for another year.

The Palomino apartments in Brawley saw its grand opening on Thursday morning. The 60-unit housing community will serve families and farm workers and those who are low income. The post Affordable housing comes to Brawley appeared first on KYMA.
BRAWLEY, CA・11 HOURS AGO
KYMA News 11

As immigrants continue to cross into our area, one local organization is helping to ease the burden for others. Over at the Regional Center For Border Health, buses transporting immigrants have been departing since January of this year. The post Local non-profit speaks out on helping transport immigrants appeared first on KYMA.
YUMA, AZ・7 HOURS AGO
KYMA News 11

To some people a stuffed animal is nothing more than stuffing and stitching. But, to children in distress, that toy could bring a little peace. The post Synergy HomeCare – Local group seeks to help an unbearable situation appeared first on KYMA.
YUMA, AZ・11 HOURS AGO
KYMA News 11

As the nation continues to process this horrific shooting, local lawmakers are voicing their concerns. Some local leaders say they're actively trying to come up with solutions to tackle school shootings, but some wonder why more hasn't already been done. The post Local lawmakers react to Uvalde, Texas school shooting appeared first on KYMA.
YUMA, AZ・1 DAY AGO
KYMA News 11

Historic drought conditions are impacting critical infrastructure that provides water and power to the region, like the Hoover Dam, and Lakes Mead and Powell. The post Southwest water shortage expected to get worse appeared first on KYMA.
YUMA, AZ・2 DAYS AGO

SPECIAL REPORT: A day at the border

It’s difficult not to think about border security in Yuma County, as the Yuma Sector is known as one of the nation’s highest apprehension locations. The post SPECIAL REPORT: A day at the border appeared first on KYMA.
YUMA, AZ・1 DAY AGO
KYMA News 11

Local law enforcement agencies square off at the Cocopah Speedway

Arizona is currently in its 27th year of a long-term drought so saving any drop of water is becoming even more valuable. The post SPECIAL REPORT: What the current water shortage means for Yuma’s water appeared first on KYMA.
1 DAY AGO

A therapist’s views on healthy conversations about difficult topics

Because of a federal court ruling, Title 42 did not expire on May 23 but that news may not have reached all asylum seekers. The post Migrants continue to seek asylum at Yuma border appeared first on KYMA.
YUMA, AZ・3 DAYS AGO
KYMA News 11

It’s that time of year when Arizonans have a chance to try and be the first millionaire of 2022. The post EXCLUSIVE: 2022 Million-Dollar Powerball Drawing interview appeared first on KYMA.
YUMA, AZ・1 DAY AGO
KYMA News 11

Yuma is vastly outpacing the rest of the border in terms of the percentage increase in apprehensions. The post Yuma Sector: 400% increase in border encounters compared to 2021 appeared first on KYMA.
YUMA, AZ・8 DAYS AGO