This unsettling new Netflix drama has everyone talking 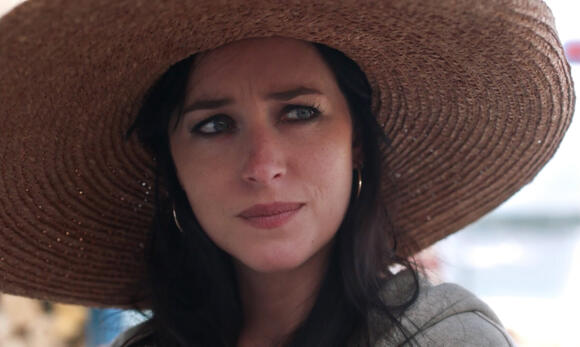 The #3 movie in the US on Netflix right now is an original feature film that the streamer released in the final days of 2021. That capped a pretty aggressive film release schedule over the past year, which saw the service release at least one new original movie a week. By the end, it had given us everything from Mank to Da 5 Bloods , The Harder They Fall , and The Power of the Dog , to name just a few examples. Five days into the new year, meanwhile, and everyone is still talking about Netflix's last unmissable original movie from mid-December — The Lost Daughter .

Starring Olivia Colman and Dakota Johnson, the movie was written by Maggie Gyllenhaal who also made her directorial debut here. She adapted the script from the novel of the same name, by Elena Ferrante.

As you might surmise from the title, motherhood is an overarching theme of the movie. It's also a theme of its source material. “How foolish to think you can tell your children about yourself before they're at least 50,” Ferrante writes at one point in the novel. “To ask to be seen by them as a person and not as a function. To say: I am your history, you begin from me, listen to me, it could be useful to you.”

In the movie, Colman plays “Leda,” a woman alone on a seaside vacation. Watching a young mother and daughter on the beach, she becomes consumed by them. Their relationship, and their extended family, remind Leda of her own complicated emotions connected to her early motherhood.

From Netflix's summary: “An impulsive act shocks Leda into the strange and ominous world of her own mind, where she is forced to face the unconventional choices she made as a young mother and their consequences.” The cast here also includes Jessie Buckley, Ed Harris, Peter Sarsgaard, Dagmara Dominczyk, and Paul Mescal.

Over at Rotten Tomatoes , the movie has a near-perfect critics score of 95 percent. Audiences, meanwhile, seem to have had a completely different reaction to the film. It's currently got an abysmal 44 percent score on the review site (based on more than 250 ratings).

“A great cast wasted on a boring story that goes nowhere,” reads one 2-star user review. “It promises some suspense or even horror but ends up delivering nothing but a bunch of unlikeable people. I couldn't wait for it to end but watched until the end in the vain hope that there was going to be something to make the whole journey worthwhile in the end. Alas, I was disappointed.”

The post This unsettling new Netflix drama has everyone talking appeared first on BGR .

Netflix has canceled another one of its major shows, with this one getting the ax after only two seasons. Variety reports that hit sci-fi drama Raising Dion has been dropped by the streamer, following its recent season debut. The news seems to have been revealed by series star Sammi Haney, who shared the news with fans on Instagram. "Sad to say that Raising Dion is CANCELED [sic] Thank you for all of the amazing support we got from all of our wonderful fans!" Haney wrote, in part. "Season 2 was a success, equal to Season 1, even if just looking at how many people watched all of it and wanted a season 3!"
TV SERIES・22 DAYS AGO
Collider

One of the most intriguing films coming out in 2023 is Warner Brothers’ Barbie starring Margot Robbie, directed by Greta Gerwig. There has been so much casting news over the last couple of months, but now we have our first official picture of Robbie in costume and a confirmed release date. Barbie will be released on July 21, 2023.
MOVIES・22 DAYS AGO
BGR.com

It was bound to happen sooner or later, a new Netflix series coming along to bump Ozark out of the top spot on the streamer’s Top 10 ranking of shows in the US. And now we know which new title wins that honor. It’s The Lincoln Lawyer, a new legal drama adapted from author Michael Connelly’s book series of the same name.
TV SERIES・2 DAYS AGO
BGR.com

What we know about the Russo brothers’ big Netflix movie, with a Marvel star in the cast

There’s been a slew of bad headlines in recent weeks out of Netflix, which is being forced to implement a huge course correction in the way it does business at the moment. But make no mistake — the streamer is still spending big, as much as $17 billion a year or more this year alone on content. And, in fact, one Netflix movie coming this summer looks set to have the biggest budget ever for a Netflix original (more than $200 million).
MOVIES・6 DAYS AGO

Ozark is still hanging on. For 10 weeks now, the fourth and final season of the buzzy, critically acclaimed Netflix original series — which dropped its final set of episodes on the streamer on April 29 — has been among the Top Netflix shows worldwide now for a whopping 10 weeks. This week, however, according to the streamer’s just-released weekly global Top 10 data, it’s got a serious challenger, posting some strong numbers.
TV SERIES・1 DAY AGO
Hello Magazine

Click here to read the full article. It seems like everyone was rooting for Renée Zellweger and Ant Anstead to get together, including an unexpected duo: the Property Brothers. Drew and Jonathan Scott recently revealed that they were the ones that ended up getting Zellweger and Anstead to meet, and subsequently fall in love. And their hard work ended up paying off! Back on April 14, 2022, the Scott brothers sat down with ExtraTV to talk about everything from Drew’s upcoming fatherhood to Jonathan loving GF Zooey Deschanel’s Vanity Fair gown. While we loved the entire interview, we’re losing it over...
CELEBRITIES・24 DAYS AGO
Popculture

Gwyneth Paltrow is a doting mom to two teenage children, Apple and Moses, who she shares with ex-husband Chris Martin. The family are notoriously private, but over the weekend the award-winning actress gave a rare insight into their upcoming plans - and how they are changing things up this year for Mother's Day.
FAMILY RELATIONSHIPS・22 DAYS AGO
The Hollywood Reporter

Sharon Osbourne opened up about everything from her family life to her health in a tell-all interview over the weekend. And during the chat, the TV favorite spoke out about her devastating battle with bulimia, which she has been living with for many years. Talking to The Times, she told...
CELEBRITIES・22 DAYS AGO
Hello Magazine

Princess Eugenie has taken to her Instagram Stories to make an exciting announcement related to The Anti-Slavery Collective, which she co-founded with her best friend Julia de Boinville back in 2017. Resharing a message from the charity organisation, the mother-of-one revealed she was posting "news from my charity". WATCH: Princess...
CELEBRITIES・22 DAYS AGO

After weeks of silence, Chris Rock has finally addressed his now-infamous incident with Will Smith at March's 94th Annual Academy Awards. During another sold-out show at Baltimore's Lyric Performing Arts Center on Friday, Rock directly referenced the slap, but only spent a second on it before moving on with his set.
BALTIMORE, MD・24 DAYS AGO
TheStreet

Once again, Disney (DIS) - Get Walt Disney Company Report is finding itself embroiled in a political quagmire owing to its support of the LGBTQ community, after Florida Gov. Ron DeSantis punished Disney for denouncing his “Don’t Say Gay Bill,” by seeking to revoke Disney World’s designation as a special tax district (which as we pointed out, is ultimately a meaningless gesture).
FLORIDA STATE・22 DAYS AGO
The Independent

A woman has revealed several “red flags” that she found in the apartment of the man she’s dating, which included two books about pregnancy and a woman’s ring.In a recent video shared to TikTok, Devin, @discoveringdevin, filmed herself sitting on a bed and putting her thumb down, as the text reads: “Red flags in his apartment.”She then began by showing four Apple MacBooks, all placed on top of each other, on a desk. “Four laptops…what are you hiding?” Devin wrote in the text over the clip.Next, she documented what appeared to be a “girl’s ring” on a white shelf....
RELATIONSHIP ADVICE・23 DAYS AGO
PopCrush

90 Day Fiancé: Before the 90 Days star Johnny Chao is showing off a new look on social media. The reality TV star rocked a fresh-faced look on the show. However, Chao debuted some new facial hair in his most recent post on Instagram. More specifically, he grew a beard and mustache.
TV & VIDEOS・22 DAYS AGO
Us Weekly

Putting it all out there. Viola Davis doesn’t have time for critics — especially when it comes to her portrayal of Michelle Obama on Showtime’s The First Lady. The 56-year-old actress told BBC News in an interview published on Monday, April 25, that it is "incredibly hurtful when people say negative things about your work." […]
CELEBRITIES・22 DAYS AGO
Outsider.com

Geroge Wendt, who played Norm on the classic TV show Cheers, decided to be like Jack when he was in public. We mean Jack Nicholson here. The famed movie actor seemingly did not mind being noticed when out among the non-Hollywood crowd. Nicholson’s attitude about this did ring a bell for Wendt during his show’s incredible run on NBC and in reruns today.
CELEBRITIES・22 DAYS AGO
Popculture

Spring is always a big time for engagements and weddings, and two beloved internet personalities are the latest to update their relationship status. On April 18, Rachel "Seltzer" Quirico revealed she and longtime boyfriend Trevor "TorcH" Housten were tying the knot after 17 years together. Both of them are beloved figures in the esports world, with Seltzer notably starring in the Syfy reality show WCG Ultimate Gamer. She's also hosted numerous esports tournaments and events for TV/streaming outlets; she also made a recent appearance on G4 TV's Boosted.
RELATIONSHIP ADVICE・23 DAYS AGO
BGR.com

Loki was one of the most anticipated MCU shows on Disney Plus, considering the massive popularity of the titular character. And the show turned out to be the most consequential for the MCU. The massive multiverse revelations in Loki will influence a large portion of Phase 4, even though Loki (Tom Hiddleston) will not show up in all of these projects. Thanks to a comment from Marvel’s Kevin Feige, we now know that Loki is the most popular Marvel show on Disney Plus and that season 2 will start filming soon.
TV SERIES・4 HOURS AGO