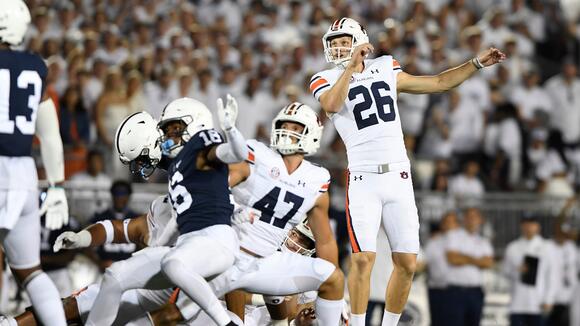 Senior kicker Anders Carlson is returning to the Tigers in 2022 to use his extra year of NCAA eligibility provided to athletes as a result of the COVID-19 pandemic, he announced Wednesday night. It will be his sixth season on the team, extending the Carlson era of Auburn kickers a ninth season. His brother, Daniel, started from 2014-17 and has made four game-winning NFL field goals this season for the Las Vegas Raiders.

Anders Carlson tore his ACL in the Tigers' loss to Mississippi State on Nov. 13, ending his 2021 season at 14-of-21 field goals and 35-for-36 on extra points; he missed his first attempt of the season and hadn't missed since. His season-long made field goal was 49 yards against LSU.

"Playing for Auburn the past five years has been the biggest blessing and honor a l\kid could ever dream up," he wrote in an Instagram post announcing his return. "My greatest friendships and moments in life can be attributed to this university. The people and opportunities here have made me a better man, and I'm forever grateful for that."

Auburn signed the No. 1 national kicking prospect in the 2022 class, Alex McPherson, in December. McPherson made a 61-yard field goal his senior season of high school.