If you loved Squid Game and Hellbound, put this new Netflix K-drama on your list 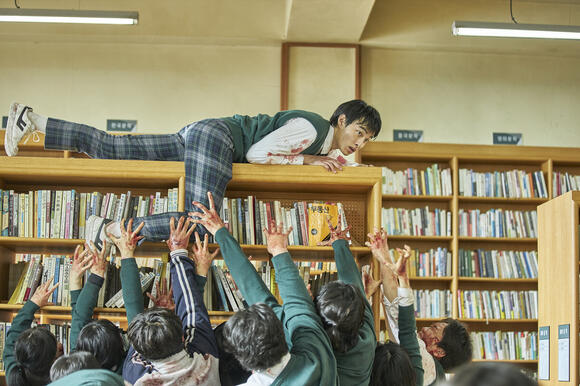 Netflix gave fans of Korean TV shows and movies a bumper crop of riches to enjoy in 2021, a trend that already looks set to continue in 2022. On the heels of the release of two recent TV shows in this genre — Squid Game and Hellbound , the former being one of the biggest Netflix releases of all time — a new TV series is set to hit the streamer later this month. Based on what started as a digital comic on Webtoon, All Of Us Are Dead might not match the insane ratings numbers of Squid Game , but this one has all the makings of another huge title for Netflix anyway.

Horror? Check (this category is actually crushing it on the streamer right now). A Korean title with global appeal? Visceral action and violence, and an easy-to-grasp story? Check, and check. Below, we’ll get into all the reasons why you’ll definitely want to put this new Netflix title on your list to check out when it launches on Jan. 28.

All Of Us Are Dead Netflix

The story for this 12-episode series is pretty straightforward. A group of students is trapped in a high school, according to Netflix, “and find themselves in dire situations as they seek to be rescued from a zombie invasion of their school.”

Of course, this will be far from the first such Korean horror title to end up on Netflix for global distribution. One of the biggest and most recent examples was Hellbound , released back in November . The latter was, in fact, something of a philosophical complement to Squid Game . Which, of course, was a scathing indictment of modern capitalism.

This new Korean-language release from Netflix, meanwhile, will fit in nicely with the overall string of horror genre content over the past year. Including everything from the Fear Street movie trilogy to Army of the Dead and Blood Red Sky , to name just a few.

The IMDb page for All Of Us Are Dead makes this one sort of sound like The Walking Dead: High School Edition . “A high school becomes ground zero for a zombie virus outbreak,” it reads. “Trapped students must fight their way out or turn into one of the rabid infected.”

Additional details to know about the new series:

Here’s where you can watch the new show when it debuts on Netflix later this month.

Check out the trailer below

The new trailer for the series that was released just a few days ago should whet your appetite even more. It starts off with students engaging in normal behavior — playing rock, paper scissors. Catching up with friends. Engaging in school activities, like archery practice. Eventually, in what looks to be a science class, an infected mouse ends up biting a student. The girl, blooded and dazed, shuffles into a classroom and collapses. You can guess what happens next.

The post If you loved Squid Game and Hellbound, put this new Netflix K-drama on your list appeared first on BGR .

Netflix has canceled another one of its major shows, with this one getting the ax after only two seasons. Variety reports that hit sci-fi drama Raising Dion has been dropped by the streamer, following its recent season debut. The news seems to have been revealed by series star Sammi Haney, who shared the news with fans on Instagram. "Sad to say that Raising Dion is CANCELED [sic] Thank you for all of the amazing support we got from all of our wonderful fans!" Haney wrote, in part. "Season 2 was a success, equal to Season 1, even if just looking at how many people watched all of it and wanted a season 3!"
TV SERIES・22 DAYS AGO
BGR.com

The signs that a massive shift is underway at the world’s biggest streaming service continue to mount. A looming Netflix password-sharing crackdown, the launch of an ad-supported tier, price increases, and fan-favorite shows canceled right and left — it’s led to something of a backlash from not only Netflix subscribers. But also the media and analysts who’ve breathlessly sung the company’s praises for years. And that’s not all.
TV & VIDEOS・4 DAYS AGO
BGR.com

What we know about the Russo brothers’ big Netflix movie, with a Marvel star in the cast

There’s been a slew of bad headlines in recent weeks out of Netflix, which is being forced to implement a huge course correction in the way it does business at the moment. But make no mistake — the streamer is still spending big, as much as $17 billion a year or more this year alone on content. And, in fact, one Netflix movie coming this summer looks set to have the biggest budget ever for a Netflix original (more than $200 million).
MOVIES・6 DAYS AGO
BGR.com

It was bound to happen sooner or later, a new Netflix series coming along to bump Ozark out of the top spot on the streamer’s Top 10 ranking of shows in the US. And now we know which new title wins that honor. It’s The Lincoln Lawyer, a new legal drama adapted from author Michael Connelly’s book series of the same name.
TV SERIES・2 DAYS AGO

The hit new Netflix movie that shot straight to #1

For all of the bad press that Netflix has accumulated in recent weeks — and boy, has there been a lot of it — it might have gotten lost among some people that the streamer, to put it simply, has still got the touch. It can release something on a Friday, like the new Rebel Wilson-led comedy Senior Year, and by Monday it will quite often be the #1 Netflix title in its category.
TV & VIDEOS・1 DAY AGO
The US Sun

A WOMAN has claimed she got very creative when it came to getting revenge on her ex who cheated on her. TikTok user @kykynicolee uploaded a video saying how she posed as a recruiter and put her love rat partner through a gruelling month-long job interview - before rejecting him.
RELATIONSHIP ADVICE・27 DAYS AGO
Insider

From the gourmet meals and missions to the VIP perks and room with a droid, here's what the galactic experience was like — and why we'd do it again.
LIFESTYLE・23 DAYS AGO
People

Megan Fox wants her kids to express themselves however they please. In a wide-ranging interview with Glamour U.K. for their April cover story, the 35-year-old actress opens up about how she teaches her children, Journey River, 5, Bodhi Ransom, 8, and Noah Shannon, 9, about gender identity and encourages them to be confident in who they are.
FAMILY RELATIONSHIPS・22 DAYS AGO

After weeks of silence, Chris Rock has finally addressed his now-infamous incident with Will Smith at March's 94th Annual Academy Awards. During another sold-out show at Baltimore's Lyric Performing Arts Center on Friday, Rock directly referenced the slap, but only spent a second on it before moving on with his set.
BALTIMORE, MD・24 DAYS AGO
The Independent

A woman has revealed several “red flags” that she found in the apartment of the man she’s dating, which included two books about pregnancy and a woman’s ring.In a recent video shared to TikTok, Devin, @discoveringdevin, filmed herself sitting on a bed and putting her thumb down, as the text reads: “Red flags in his apartment.”She then began by showing four Apple MacBooks, all placed on top of each other, on a desk. “Four laptops…what are you hiding?” Devin wrote in the text over the clip.Next, she documented what appeared to be a “girl’s ring” on a white shelf....
RELATIONSHIP ADVICE・23 DAYS AGO
Outsider.com

She’s definitely embracing the Hawaii lifestyle, and now “NCIS: Hawai’i” star Vanessa Lachey is showing off her everyday surrounding to her Instagram followers. “Hawai’i = Home,” Vanessa Lachey declares in her latest social media post. The “NCIS: Hawai’i” star also shares a snapshot of her sitting in a breathtaking area in Hawaii.
HAWAII STATE・22 DAYS AGO
hotnewhiphop.com

It seems Coi Leray is getting fed up with the drama. She and her father, Benzino, have not seen eye to eye for quite some time, and despite numerous attempts to mend their relationship, they keep ending up back at square one. Yesterday, 50 Cent, whose been feuding with Benzino...
CELEBRITIES・24 DAYS AGO
Insider

Katy Perry reacted quite hilariously to a Top 11 contestant on American Idol during a unique song challenge on Monday night's episode. Each of the remaining contestants were given a song to perform by each judge - Perry, Lionel Richie and Luke Bryan - with the singer selecting one and then tasked with guessing which judge picked that song for him or her.
MUSIC・22 DAYS AGO
SheKnows

The funny things that kids say are sometimes the cutest. With Eli currently in a coma, we haven’t seen Days of Our Lives actor Lamon Archey in action in Salem for a while now but he recently showed off a new look that had his daughter not only asking him why he decided on the change but also giving her opinion on why he did it in the first place.
CELEBRITIES・22 DAYS AGO
PopCrush

Spring is always a big time for engagements and weddings, and two beloved internet personalities are the latest to update their relationship status. On April 18, Rachel "Seltzer" Quirico revealed she and longtime boyfriend Trevor "TorcH" Housten were tying the knot after 17 years together. Both of them are beloved figures in the esports world, with Seltzer notably starring in the Syfy reality show WCG Ultimate Gamer. She's also hosted numerous esports tournaments and events for TV/streaming outlets; she also made a recent appearance on G4 TV's Boosted.
RELATIONSHIP ADVICE・23 DAYS AGO
BGR.com

There are so many phenomenal deals out there on Tuesday that I almost don’t know where to start. That shouldn’t come as much of a surprise though, since Memorial Day 2022 is less than two weeks away. The star of the show today is Amazon’s one-day sale on...
SHOPPING・1 DAY AGO
BGR.com

Roku is giving its best streaming player an overdue update. On Thursday, Roku announced that its premium Roku Ultra now includes the Roku Voice Remote Pro. Ever since it launched in 2020, the Roku Ultra has shipped with the standard voice remote. Starting today, it comes with the Voice Remote Pro in the box, but it still costs $99.99.
ELECTRONICS・6 DAYS AGO
BGR.com

For years, I’ve thought of my office chair as one of my savvier buys. It wasn’t as outrageously expensive as some of the offerings from the top brands, but it still provides me with far more support than the hand-me-down swivel chair I had been sitting on previously. I didn’t think I needed anything more than what the chair provided. But then I sat down on Purple’s Royal Seat Cushion for the first time and realized what I’d been missing.
AMAZON・4 DAYS AGO