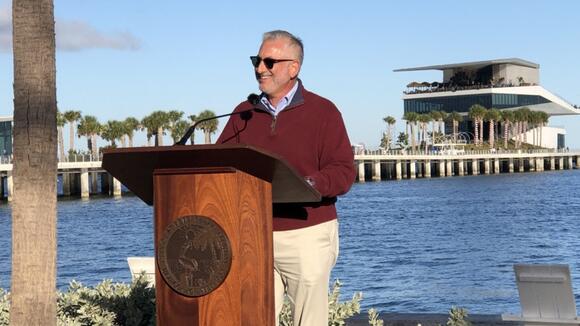 “St. Petersburg is in fact faring well,” he told a crowd of friends, supporters and city workers gathered at Doc Ford’s Rum Bar and Grille.

When he swore in as St. Pete’s mayor eight years ago, Kriseman said the “time had come to emerge from the shadow of the city across the bay, to become a center of commerce and a driver of economic development in our own right, and we’ve done that.”

In addition to the achievements of revamping the downtown pier district and building a new police headquarters, the outgoing mayor told 8 On Your Side he hopes the culture of St. Petersburg has changed for the better.

“To become a city that’s more welcoming, that’s more tolerant, that’s diverse, that celebrates equity, that creates opportunity and lifts everybody up no matter where you live in the city,” Mayor Kriseman said.

There are still challenges for his successor Ken Welch, Kriseman said, like housing affordability and the effects of climate change and sea level rise.

Kriseman took office as the Sunshine City was still rebounding from the Great Recession and he leaves City Hall amid yet another wave of COVID-19.

During his farewell event, Mayor Kriseman learned that Mayor-elect Welch had tested positive for COVID-19 and that the city’s first African American mayor will be sworn-in virtually on Thursday. Kriseman wished Welch a “quick and speedy recovery.”

“This omicron is just so contagious,” Kriseman said, “but at least if you get it you can minimize the impact of it if you get vaccinated and boosted.”

One of Kriseman’s final moves as mayor was selecting a Miami-based development group to transform the Tropicana Field site.

“Because it is time to move forward with the redevelopment of that site with or without baseball,” he said during his address. “Look, we all love the Rays, but they don’t own the site. The people of St. Pete do.”

Mayor Kriseman told 8 On Your Side he still believes St. Pete is the best place for the Rays to call home, but if the team decides to move, he said that should not be outside the Tampa Bay region.

Grace Maseda Sainz is a first generation Cuban-American who's made such an impact on the Tampa Bay area, she has been named the 2022 Hispanic Woman of the Year.
TAMPA, FL・11 HOURS AGO
WFLA

As southwest Florida communities begin the long recovery process following Hurricane Ian’s destruction, organizations across Tampa Bay are collecting donations for the many families in need.
SARASOTA, FL・1 DAY AGO

The City of Dunedin says its dealing with a "cybersecurity incident" that has shut down a number of systems in its network.
DUNEDIN, FL・12 HOURS AGO
WFLA

Verizon customers across the Tampa Bay area may be experiencing issues when calling 911.
MANATEE COUNTY, FL・1 DAY AGO
WFLA

Sheriff’s office spokesman Johnny Garcia said in a statement Monday the office had not confirmed or identified any persons of interest in the ongoing investigation. Asked about Huerta, Garcia had told the Express-News, “We are not publicly identifying anybody.”
TAMPA, FL・1 DAY AGO
WFLA

Schools in Sarasota County are getting geared up to reopen after Hurricane Ian.
SARASOTA COUNTY, FL・1 DAY AGO
WFLA

Schools in Sarasota County are closed until further notice due to damage from Hurricane Ian, according to a notice posted to the school district's website.
SARASOTA COUNTY, FL・1 DAY AGO

Humane Society of Tampa Bay completely full, adoption fee on some dogs to be waived

The Humane Society of Tampa Bay is full following Hurricane Ian and no longer accepting any strays or owner-surrendered dogs, according to a tweet on Monday.
TAMPA, FL・2 DAYS AGO
WFLA

The Tampa Bay Rays will be playing the first game of their wild card series against the Cleveland Guardians on Friday.
SAINT PETERSBURG, FL・10 HOURS AGO
WFLA

Bartow residents still without power, dealing with flooding one week after Hurricane Ian

For some Polk County residents, life is starting to return to normal after Hurricane Ian. Others are still dealing with flooding and a lack of power.
BARTOW, FL・3 HOURS AGO
WFLA

Pasco deputy rescues kitten ahead of Ian, names it ‘Hurricane’

Disturbance in the Atlantic now has 80% chance of development

The next named storm of the 2022 Atlantic hurricane season is Julia.
TAMPA, FL・1 DAY AGO
WFLA

Tampa Police are asking for the public's help in identifying one or more suspects who opened fire on a homeless family of five sleeping in a park early Wednesday morning.
TAMPA, FL・14 HOURS AGO