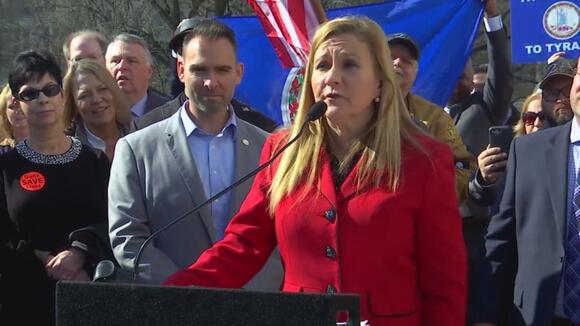 CHESTERFIELD, Va. (WRIC) — State Senator Amanda Chase, who represents Colonial Heights, Amelia County, and portions of Chesterfield in the Virginia Senate, has given up her bid for a seat in the House of Representatives.

However, the Virginia Supreme Court’s redistricting plan – approved just last week – threw a wrench in that plan. Spanberger herself found the 7th district moved out from under her, and has announced that she will move to ensure she can still run there.

Chase was also moved out of the 7th district and – based on the address provided in federal elections paperwork – now resides in the 1st district, currently represented by fellow Republican Rob Wittman.

“I will not challenge a Republican representative who is doing a good job representing the people of their district,” Chase said in a statement Monday night.

Chase told 8News that she would serve her remaining two years in the State Senate and seek re-election in the new 12th district in 2023.

While Chase won her last election in the 11th district by a 10-point margin, she may face a tougher fight in the 12th district, which includes more of the densely-populated Midlothian and Bon Air, and no longer includes rural Amelia County, a stronghold of Republican support.

No proof yet from Sen. Amanda Chase showing Democrats were ‘cheating’ in 2021 election

Chase has been a strong supporter of former President Donald Trump, and ran for the Republican nomination for Governor while promoting baseless claims of election fraud in relation to the 2020 presidential election.

She ultimately lost the nomination to Glenn Youngkin, who went on to win the general election.

Henrico County will be able to undertake a major expansion of its sewer system, thanks to $32 million in federal funding from the American Rescue Plan.
HENRICO COUNTY, VA・13 HOURS AGO
WRIC - ABC 8News

Virginia Union University will pay $35,000 a year to keep its illuminated "VUU" logos on its campus tower, signs that were installed without approval from the state or city of Richmond.
RICHMOND, VA・15 HOURS AGO
WRIC - ABC 8News

The name of a businessman who enslaved people will no longer be on the University of Richmond Law School, according to an announcement.
RICHMOND, VA・1 DAY AGO

Say ‘hay’ to Marshal, the newest equine member of the Richmond Police Department

Marshal, a ten-year-old male Appaloosa and Percheron mix, is the newest member of the Richmond Police Department. Today, Marshal had the opportunity to start off his week by going out and meeting the public that he serves.
RICHMOND, VA・16 HOURS AGO
WRIC - ABC 8News

More than 70 rappellers descended down the Dominion Energy Skyscraper on Saturday in support of the Richmond SPCA.
RICHMOND, VA・2 DAYS AGO
WRIC - ABC 8News

Richmond's City Council has approved a plan to have RVA Diamond Partners serve as the developer for the massive Diamond District project.
RICHMOND, VA・10 HOURS AGO
WRIC - ABC 8News

Dinwiddie tax bills to be sent out this week

Residents of Dinwiddie should be on the look out for tax bills that will be mailed out this week.
DINWIDDIE COUNTY, VA・2 DAYS AGO
WRIC - ABC 8News

Woodland Cemetery, which opened in 1917 for the internment of Black Richmond-area residents during the Jim Crow era, now has around 30,000 gravesites, including legendary tennis player and Richmond native Arthur Ashe.
HENRICO COUNTY, VA・1 DAY AGO
WRIC - ABC 8News

At least three pedestrians have been hit and killed across Central Virginia over the last month.
COLONIAL HEIGHTS, VA・1 DAY AGO

The Chesterfield County Police Department is asking the public for help with finding a fugitive wanted for indecent liberties with a child.
CHESTERFIELD COUNTY, VA・19 HOURS AGO
WRIC - ABC 8News

Hurricane Ian is expected to hit some areas of Central Virginia by late Friday, Sept. 30, until Sunday. The Richmond area could expect to see two to five inches of rainfall but is not expecting any damaging winds.
RICHMOND, VA・12 HOURS AGO
WRIC - ABC 8News

Man charged with murder of woman in Richmond ‘domestic-related’ incident

A man is in custody following an investigation by the Richmond Police Department into a homicide in the neighborhood of Jahnke.
RICHMOND, VA・14 HOURS AGO
WRIC - ABC 8News

Louisa County has announced that DMV Connect, the department's mobile customer service center, will be available in the county on Tuesday, Oct. 4.
LOUISA COUNTY, VA・3 DAYS AGO

The event is taking place at all Richmond McDonald's locations on Tuesday, Sept. 27. Richmond Mayor Levar Stoney will be at the McDonald's at 2011 Chamberlayne Avenue encouraging Richmonders to participate.
RICHMOND, VA・14 HOURS AGO
WRIC - ABC 8News

‘Oh no, you didn’t!’: Friend of Virginia Lottery jackpot winner couldn’t believe it

Katherine Moore was sitting in the passenger seat of her friend's car when she alerted her friend to the news, saying, "I think I just won the jackpot!"
BUCKINGHAM COUNTY, VA・21 HOURS AGO
WRIC - ABC 8News

Virginia Pridefest returns to Richmond on Saturday after 3 year hiatus

Pridefest is back in Richmond this Saturday after three years. The festival takes place from noon to 8 p.m. on Saturday, Sept. 24 on Brown's Island, located at 500 Tredegar Street in Richmond. The event is totally free but donations are welcome.
RICHMOND, VA・2 DAYS AGO
WRIC - ABC 8News

According to police, the five thefts took place between May and September of 2022, on both the Medical College of Virginia and Monroe Park Campuses. It is believed that the suspect was going into campus buildings and stealing credit cards from unlocked offices before using them at nearby retailers.
RICHMOND, VA・1 DAY AGO