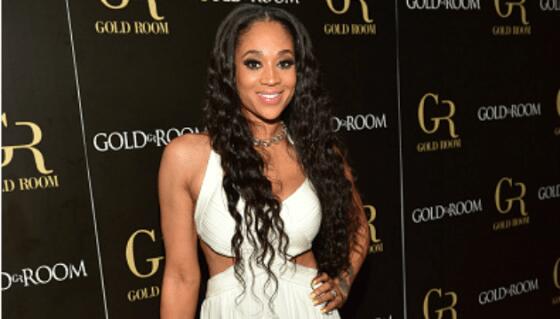 Mimi Faust is celebrating 50 trips around the sun today (January 3rd) and she looks absolutely stunning while doing it! The birthday queen took to Instagram today to share a series of photos in honor of her milestone birthday and it’s apparent that the Love and Hip Hop star is clearly aging backward.

Taking to the social platform, the now 50-year-old shared a photo carousel of herself in two very different but very beautiful looks. For the first photo, she rocked a white and black fur sweater and black leather leggings. She wore black sandals and rocked her braided locs in a half-up, half-down style. She accessorized the look with oversized hoop earrings and served face in her glamourous beat. And in the second photo, she traded in her fur sweater for a black and white blazer and black turtleneck. In this look, opted for a curled silk press instead of her box braids that she wore parted down the middle to frame both sides of her face. Here, she was all smiles as she showed off her natural glam and gave a whole new meaning to the phrase, “black don’t crack.”

“ 50 trips around the Sun So Grateful So Blessed So Appreciative #making50lookgood #itscapricornseason ,” she captioned the birthday post. Check it out below.

We first met Mimi in season 1 of Love and Hip Hop Atlanta where she was part of the infamous love triangle between her ex and his then-girlfriend. Now that the years have passed, the reality star is focusing on being happy and keeping her family drama-free, which includes her relationship with longtime girlfriend Ty Young, who she recently reunited with after a brief breakup. “We had to come full circle,” Faust told Essence last year of how she’s rebuilding their relationship. “We both needed to work on things and I needed to work on myself especially because someone else can not make me whole or complete. I have to do that myself, then someone can add to that.”

She continued by explaining to the magazine that the couple is now “starting over on every level — as friends, as getting to know each other, setting boundaries” explaining that she just wants “a clean slate” when it comes to rebuilding that part of her life.

Mimi Faust Reveals Her Mother Abandoned Her For Scientology

Gizelle Bryant took to Instagram to show off her effortless slay from her daughters' sweet 16 birthday party.
FAMILY RELATIONSHIPS・21 DAYS AGO
The Independent

A wedding caterer has been praised for turning down all events where the bride and groom are asking their guests to pay for their own meals.In a recent post shared on the discussion-based site Mumsnet, a user explained that they run a “wedding catering company” that is “based on a food truck” and works for “less formal weddings”.They then revealed that some couples who have reached out to them about catering have been expecting their guests to purchase their own dinners at their weddings, a concept that the caterer said they have been “turning down” because they believe it is...
RELATIONSHIP ADVICE・27 DAYS AGO
People

Megan Fox wants her kids to express themselves however they please. In a wide-ranging interview with Glamour U.K. for their April cover story, the 35-year-old actress opens up about how she teaches her children, Journey River, 5, Bodhi Ransom, 8, and Noah Shannon, 9, about gender identity and encourages them to be confident in who they are.
FAMILY RELATIONSHIPS・26 DAYS AGO
ETOnline.com

Kourtney Kardashian Is a Vision in Short White Wedding Dress and Long Veil: All The Details

Kourtney Kardashian was a vision in white during her wedding to Travis Barker in Italy over the weekend. While the pair are already legally married, they took Portofino, Italy to celebrate their nuptials. Kourtney wore a short white corsetted dress with a lace overlay by Dolce & Gabbana, which she...
CELEBRITIES・6 HOURS AGO

“NCIS: Los Angeles” star Daniela Ruah absolutely killed it on the red carpet and stage last night at the International Portuguese Music Awards. While everyone at home was preparing for tonight’s “NCIS: Los Angeles” episode, Daniela Ruah was getting all dressed up to host the IMPA Awards. The ceremony took place at the Providence Performing Arts Center in Providence, Rhode Island, on Saturday, April 23.
LOS ANGELES, CA・28 DAYS AGO
ComicBook

After weeks of silence, Chris Rock has finally addressed his now-infamous incident with Will Smith at March's 94th Annual Academy Awards. During another sold-out show at Baltimore's Lyric Performing Arts Center on Friday, Rock directly referenced the slap, but only spent a second on it before moving on with his set.
BALTIMORE, MD・28 DAYS AGO
People

Paulina Gretzky walked down the aisle in Vera Wang!. The bride shimmered during her wedding with pro golfer Dustin Johnson on Saturday at Tennessee's Blackberry Farm. Gretzky showed off the stunning look on Instagram Monday in a photo of the newlyweds kissing. "4/23/22♥," she simply captioned the post. For...
BEAUTY & FASHION・26 DAYS AGO
HelloBeautiful

90 Day Fiancé stars Anna-Marie Campisi and Mursel Mistanoglu have added a little boy to their family! The couple, who tied the knot on Season 7 of the TLC reality show, announced on Instagram this week that their son, Gokhan John, had been born via a surrogate on Monday, April 11 after the couple's initial struggle with fertility.
FAMILY RELATIONSHIPS・26 DAYS AGO
Outsider.com

She’s definitely embracing the Hawaii lifestyle, and now “NCIS: Hawai’i” star Vanessa Lachey is showing off her everyday surrounding to her Instagram followers. “Hawai’i = Home,” Vanessa Lachey declares in her latest social media post. The “NCIS: Hawai’i” star also shares a snapshot of her sitting in a breathtaking area in Hawaii.
HAWAII STATE・26 DAYS AGO
hotnewhiphop.com

50 Cent cast doubt on Megan Thee Stallion's recent comments about not having been in an “intimate relationship” with Tory Lanez, prior to the infamous shooting in July 2020 which left her with gunshot wounds. Megan's comment came during a recent interview with Gayle King, during which she...
CELEBRITIES・26 DAYS AGO
PopCrush

90 Day Fiancé: Before the 90 Days star Johnny Chao is showing off a new look on social media. The reality TV star rocked a fresh-faced look on the show. However, Chao debuted some new facial hair in his most recent post on Instagram. More specifically, he grew a beard and mustache.
TV & VIDEOS・26 DAYS AGO

It seems Coi Leray is getting fed up with the drama. She and her father, Benzino, have not seen eye to eye for quite some time, and despite numerous attempts to mend their relationship, they keep ending up back at square one. Yesterday, 50 Cent, whose been feuding with Benzino...
CELEBRITIES・28 DAYS AGO
Popculture

Spring is always a big time for engagements and weddings, and two beloved internet personalities are the latest to update their relationship status. On April 18, Rachel "Seltzer" Quirico revealed she and longtime boyfriend Trevor "TorcH" Housten were tying the knot after 17 years together. Both of them are beloved figures in the esports world, with Seltzer notably starring in the Syfy reality show WCG Ultimate Gamer. She's also hosted numerous esports tournaments and events for TV/streaming outlets; she also made a recent appearance on G4 TV's Boosted.
RELATIONSHIP ADVICE・27 DAYS AGO
The Independent

Helen Skelton has revealed that she has separated from her husband, rugby player Richie Myler.The Countryfile host announced the news in an Instagram statement, writing that Myler has “left the family home”.Skelton’s announcement comes just four months after they welcomed their third child.“Very sad to say that Richie and I are no longer a couple,” she wrote. “He has left the family home. We will be doing our best to co parent our small children.”Skelton, who married Myler in 2013, accompanied the post with two broken heart emojis.The pair have three childen together: Ernie, aged six, Louis, aged...
CELEBRITIES・26 DAYS AGO
SheKnows

The funny things that kids say are sometimes the cutest. With Eli currently in a coma, we haven’t seen Days of Our Lives actor Lamon Archey in action in Salem for a while now but he recently showed off a new look that had his daughter not only asking him why he decided on the change but also giving her opinion on why he did it in the first place.
CELEBRITIES・26 DAYS AGO
HelloBeautiful

Porsha Williams stepped out for date night recently with her future hubby, Simon Guobadia, rocking an all-black look that was everything! She shared a few photos from her fashionable night out with her boo to her Instagram page, posting a series of videos and photos showing off her look. In the first post, the former […]
CELEBRITIES・22 DAYS AGO
hotnewhiphop.com

Kim Kardashian's ex-husband, Damon Thomas, continues to "wish her the best," despite any false narratives about their past relationship. The 51-year-old sat down with DJ Vlad, looking back at his marriage with now-billionaire businesswoman Kim Kardashian in the early 2000s. He believes he's played a "part in their journey," however, he doesn't want to be known as "Kim Kardashian's husband" and wants to "get in control of [his] narrative," as many people fail to recognize he has won Grammys and even made it to the Oscars.
RELATIONSHIPS・26 DAYS AGO
HelloBeautiful

Chloe Bailey took to Instagram to cover the hit song, "Gyalis" in a mesh black ensemble that we loved!
MUSIC・12 DAYS AGO