725 suspects were arrested in the year since the Capitol riot, DOJ announces. The FBI is looking for 350 more. 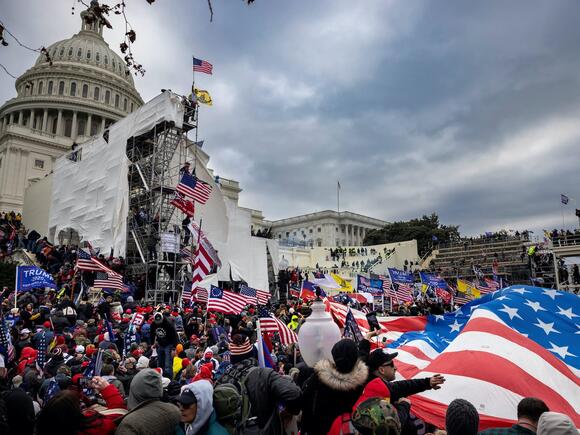 Seven hundred and twenty five people have been arrested in connection with the riot at the US Capitol, the Department of Justice said in a year-end update on its investigation.

DOJ officials broke down the arrests, convictions, and sentences of those accused of involvement in the January 6, 2021, storming of the Capitol.

The department said 165 of the 725 arrested — around 22% — had pleaded guilty, mostly to misdemeanor charges.

Twenty of the guilty pleas were for felony charges, and four of them — all cases of people attacking police officers — come with minimum prison terms of at least 20 years, the department said.

There are many more people at the riot whom the FBI has yet to identify. The DOJ release said that agents are seeking at least 350 more people they suspect of violent acts, including 250 they say assaulted police officers.

Here are some of the most notable convictions:

Insider has published interactive databases of those charged over the riot , and those who pleaded guilty .

If democrats would put this much effort into investing who is responsible for covid, (fauci)and millions of unnecessary deaths, then it would show they care about Americans. They're to busy witch hunting as usual.

This is the surreal moment 21 migrants were found concealed inside two wooden crates during a traffic stop in Texas. The shocking findings took place April 6 when state troopers and U.S. Border Patrol agents pulled over a pickup truck and disrupted the human smuggling attempt in Laredo. Footage released...
LAW ENFORCEMENT・23 DAYS AGO
BuzzFeed News

Thomas Webster’s trial kicked off with dueling videos from the Capitol and competing theories of what they showed.
LAW ENFORCEMENT・22 DAYS AGO
Fox News

A sheriff in Florida arrested his own daughter on drug charges as his department continues its war on addictive substances. Franklin County Sheriff A.J. Smith gave a statement on April 19 confirming that his daughter, Kristen Kent, had been arrested under suspicion of meth trafficking two days prior. "Methamphetamine does...
FLORIDA STATE・23 DAYS AGO
Nashville News Hub

High-ranking corrections official who moved two Black pretrial detainees into the same cell row as white supremacist inmates and unlocked their cells so they can be attacked has been convicted, AAG said

The Centers for Disease Control and Protection announced in April that the Title 42 would be rescinded on May 23.
LOUISIANA STATE・23 DAYS AGO
Black Enterprise

Officials charged a Wisconsin man with a federal hate crime in the series of intimidation and threats that targeted at least one Puerto Rican neighbor and eight Black residents in his apartment complex. According to CNN, Milwaukee County resident William McDonald faces a federal charge of “willfully injuring, intimidating, or...
MILWAUKEE COUNTY, WI・22 DAYS AGO
Newsweek

The mother has questioned whether the soldiers would let her son live even if she did send the money.
MILITARY・24 DAYS AGO

The intelligence the U.S. shared with Ukraine helped it continue to resist Russian invading forces and even shoot down a transport plane carrying hundreds of Russian troops, a new report revealed. According to current and former U.S. officials who spoke with NBC News on Tuesday, the U.S. provided critical intelligence...
MILITARY・22 DAYS AGO
US News and World Report

WASHINGTON (Reuters) - The United States on Tuesday offered a reward of up to $10 million for information on six people it described as Russian military intelligence officers who had conducted cyber attacks affecting critical U.S. infrastructure. The six officers work in a cyber-focused unit of Russia's Main Intelligence Directorate...
PUBLIC SAFETY・22 DAYS AGO
Business Insider

Rep. Marjorie Taylor Greene (R-GA) speaks to supporters of former U.S. President Donald Trump at the Banks County Dragway on March 26, 2022 in Commerce, Georgia. This event is a part of Trump's Save America Tour around the United States. (Megan Varner/Getty Images) On Monday, CNN's Andrew Kaczynski and Em...
COMMERCE, GA・22 DAYS AGO
NewsOne

In an ironic twist, Payton Gendron, the suspected white supremacist in custody following this weekend’s deadly shooting rampage in Buffalo that's been widely attributed to anti-Black racism, has a best friend who is of a different ethnicity. The post Buffalo Shooting Suspect's Hispanic Best Friend Speaks Out appeared first on NewsOne.
BUFFALO, NY・1 DAY AGO
OK! Magazine

The Santa Fe Sheriff doesn't believe Alec Baldwin is out of the woods just yet in regards to the ongoing investigation into Halyna Hutchins' death on the Rust film set. The late 42-year-old cinematographer was killed while on set of the Western film in October 2021 after the actor, 63, fired a prop gun that contained live rounds. While multiple individuals involved in the production of the film — including Baldwin, the film's assistant director David Halls, armorer Hannah Gutierrez-Reed and more — have been questioned about their apparent roles in the fatal mishap, the Santa Fe Sheriff's Department doesn't...
22 DAYS AGO
Newsweek

The former president referenced scoring well on a cognitive test in 2018, which is designed to detect whether a person has early stages of dementia.
DELAWARE COUNTY, OH・24 DAYS AGO
rolling out

A 14-year-old Black teen with autism was attacked by New York police officers while he was waiting for his siblings to finish checking out at a Target store on April 18. Video shows the Black teenage boy being tackled to the ground by deputies. His sister can be heard in the background yelling “Get off of my brother! What are you doing?”
22 DAYS AGO
Newsweek

With a key Senate primary still in the balance, Donald Trump is again casting doubt on election integrity without offering any evidence.
PENNSYLVANIA STATE・15 HOURS AGO
Newsweek

Individual judges may not like the policy choices of the Biden administration, but it is not their job to weigh in on that policy debate.
TEXAS STATE・23 DAYS AGO
Newsweek

"It's a shame all those people are dead, all because of a rigged election," Trump said in an interview with Piers Morgan.
PRESIDENTIAL ELECTION・23 DAYS AGO