Star News Group is your local news source in southern Monmouth and northern Ocean counties. Visit our website at Starnewsgroup.com for news from the pages of The Coast Star, The Ocean Star and Night & Day Magazine. 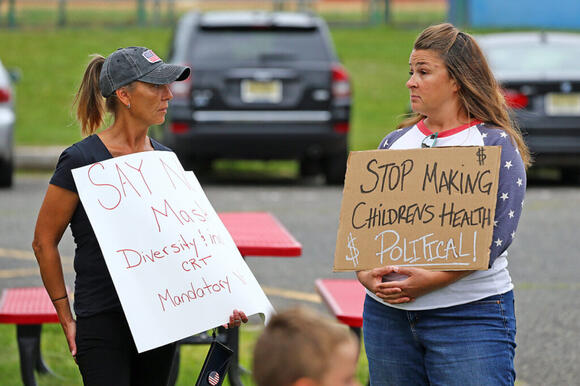 The scandal, which resulted in suspension of the varsity football program at the school, joined challenges to the board of education that have also included reopening as the COVID-19 pandemic continued, parental resistance to compliance with the state’s mask policy and the results of an earlier investigation into the use of substandard classroom trailers.

Wall High School and Allenwood Elementary School were forced to switch to all virtual instruction for two weeks after a growing number of students tested positive for COVID-19. The student representative to the district’s board of education also made an appeal to members that more had to be done to ensure that students do not feel isolated by the ongoing pandemic.

A group of parents and students attended the township board of education meeting Tuesday night to protest students’ continued use of masks while in the classroom. The school board said it is bound by Gov. Phil Murphy’s executive orders. While neighboring states such as New York, Pennsylvania and Delaware have lifted indoor public mask mandates, Gov. Murphy remained firm on the issue, although he has lifted outdoor mask mandates.

A rescheduled Wall Board of Education meeting was conducted a week after the board was forced to adjourn an in-person session because most of some 50 members of the public attending refused to wear face masks, as required under a state mandate.

At the start of the virtual meeting, Superintendent Tracy Handerhan addressed the elephant in the room, saying that the district has a responsibility to comply with state law, despite the controversy over Gov. Phil Murphy’s executive order mandating the wearing of face coverings in school buildings.

Confirming rumors that “off campus” sexual assaults involving Wall High School students are being investigated along with the alleged locker room incident involving members of the varsity football team, the Monmouth County Prosecutor’s Office announced that it had taken full control of both cases.

The ongoing investigation of alleged sexual harassment and assault in the guise of “hazing” by members of the Wall High School football team dominated a Wall Township school board meeting, as parents, students and alumni stood up to condemn the district’s handling of the matter.

Earlier in the day, Superintendent Handerhan declared the team’s season officially over, withdrawing it from a scheduled Thanksgiving Day game against Manasquan High School. Manasquan immediately announced that it will instead host Shore Regional in the holiday game.

The man who led the Sayreville High School sports recovery from a sexual assault and hazing scandal in 2015 was hired by the Wall Township School District to serve as interim athletic director. The hiring of Nicholas Pizzulli, at a rate of $600 per day, was unanimously approved by BOE during a meeting marked by continued turmoil over the handling of the matter. Mr. Pizzulli is to begin work on Jan. 1 and continue through June 30, 2022.

This is an excerpt of the print article. For more on this story, read The Coast Star —on newsstands Thursday or online in our e-Edition .

For more on this story, read the next edition of The Coast Star —on newsstands Thursday or online in our e-Edition .

Subscribe today! If you're not already an annual subscriber to The Coast Star , get your subscription today! For just $34 per year, you will receive local mail delivery weekly, with pages and pages of local news and online access to our e-edition on Starnewsgroup.com.

Star News Group is your local news source in southern Monmouth and northern Ocean counties. Visit our website at Starnewsgroup.com for news from the pages of The Coast Star, The Ocean Star and Night & Day Magazine.