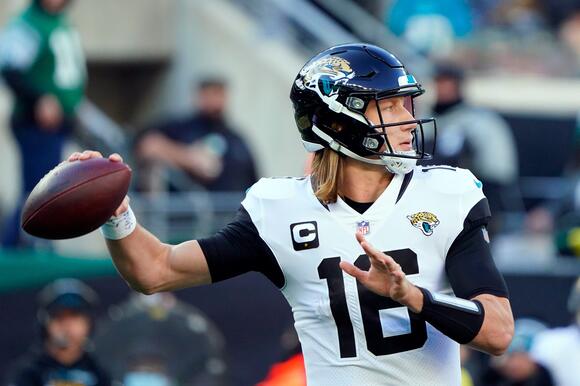 There are a few ways boys become men:

-- Their team goes 18-1 with the sole loss coming in the Super Bowl after seven years of winning nearly everything.
-- They realize their parents are not superheroes.
-- They find their older brother’s stash of dirty magazines.
-- They recognize that football is a team sport and stop giving in to the contemporary norm of sport media by comparing individual players who at no point are on the field at the same time as one another

Back in *checks notes* May, one week after the NFL Draft when I declared on this very website that Mac Jones would win offensive rookie of the year, it wasn’t because I thought Jones was the best offensive player to come out of the draft, or even the best quarterback. Jones was just the skill position player who was going to play the most for the best team that is most likely to make the playoffs. That’s all. He doesn’t have a wider skillset than any of the quarterbacks drafted ahead of him. Maybe he’s better at reading a defense than some of them, but he clearly is not better than Trevor Lawrence.

When projecting forward for awards, win totals, season-long success, and career-long success, nothing is more important than the structure around a quarterback. It’s hardly surprising that Josh Rosen, drafted a team with the worst offensive line in the league, no pass catching options, Mike McCoy running the wishbone offense in 2018, and a horrible defense ended up being a “bust” – a label that has way more to with the 2018 Cardinals and the 2019 Dolphins than it does Rosen as a player.

Likewise, Jones being successful as a rookie was more obvious than the sun rising in the east. He got drafted to a top-five roster in the NFL with the best coaching staff. End of discussion. Of course he’s good.

Lawrence? Zach Wilson? Justin Fields? There’s a reason we see the Jaguars and Jets drafting in the top ten nearly every year. Lawrence goes to a team that should be better on paper than the product they put on the field, but they hired Urban Meyer to helm not only the entire organization, but the first offensive system Lawrence would have to run in the NFL. They traded away the 12th overall pick in C.J. Henderson from only the year before, then spent a first round pick on a running back, Travis Ettienne, when the team already had a top-tier running back in James Robinson and has myriad holes to fill along the offensive line and on defense.

On this side of the coin, it should not shock anyone that Lawrence hasn’t particularly looked the part and that the Jaguars could have the first overall pick again in the 2022 NFL Draft. Systems matter more than anything, and Lawrence has found himself in maybe the worst one in the entire league.

The “if” game is tricky. But IF Trevor Lawrence, Zach Wilson, Trey Lance, or Justin Fields were on the Patriots this year, any of them would be the Offensive Rookie of the Tear. Jones with any of those teams (49ers aside, as he’d be the backup) would not be as successful as he has been with the Patriots. It’s not about the player, it’s about the structure. It’s not an insult or compliment to any of the players personally or individually. It’s just the truth.

Hunter Henry says he’s on to the Buffalo Bills and is leaving his controversial overturned touchdown against the Vikings in the past – though he still thinks he caught the ball.
FOXBOROUGH, MA・2 HOURS AGO
WEEI Sports Radio

Sunday 7: Is Mac Jones bouncing back after bottoming out?

This season has probably not gone the way Mac Jones envisioned coming off a Pro Bowl rookie season. It’s been a struggle for the Patriots’ second-year QB. But Jones is playing a much more productive, cleaner style of football of late.
ARIZONA STATE・1 DAY AGO
WEEI Sports Radio

Did Jason Garrett screw up when he said Belichick compared Stevenson to Brady and LT?

A year ago the Patriots clearly didn’t measure up to the AFC East-leading Bills. This Thursday night, New England has another chance to prove its mettle against a Buffalo team that’s shown some weaknesses in recent games.
BUFFALO, NY・8 HOURS AGO
WEEI Sports Radio

Bill Belichick got facts wrong while defending his defense's ugly 2021 showing vs. the Bills

Bill Belichick wanted to defend his defense’s evisceration at the hand of the Buffalo Bills last season, but he got some facts wrong while trying to make his point.
FOXBOROUGH, MA・2 HOURS AGO
WEEI Sports Radio

The Patriots hope to bring some of that “Pat the Patriot” luck to Gillette Stadium on Thursday night when they face the Buffalo Bills in primetime.
6 HOURS AGO
WEEI Sports Radio

The Buffalo Bills have gotten the better of the New England Patriots recently, including last year’s playoff blowout, and that’s reflected in the opening line for Thursday night’s matchup, as the Pats find themselves as big home underdogs.
9 HOURS AGO