Woman kidnapped at gunpoint, forced to drive to several ATMs before being shot 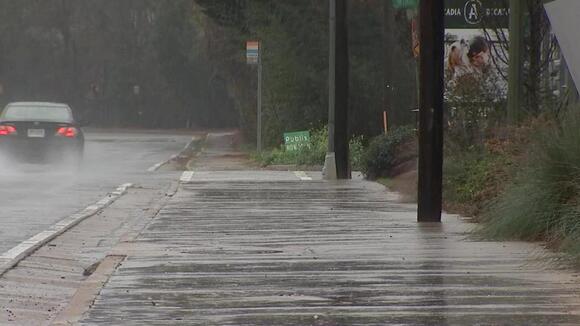 DECATUR, Ga. — Decatur police are searching for a man they say kidnapped a woman, stole money from her and then shot her Thursday morning.

Police say an armed man approached a woman in the 200 block of North Arcadia Avenue around 7:30 a.m. and forced her into a car at gunpoint.

The suspect then forced the woman to drive to several ATMs and withdraw funds from her account.

The last ATM he had her drive to was in the 3400 block of Memorial Drive. Once there, he shot her in the leg and ran from the scene. The woman was able to drive herself to a hospital with non-life threatening injuries.

Police say the woman described the man as being 6′1″ and wearing all black clothes with a mask and a backpack.

There is no word yet on any possible suspects.

An Atlanta police officer and suspect were taken to Grady Memorial Hospital after a car slammed into them. Police responded to a disturbance just before midnight in the 3800 block of Jonesboro Road in southeast Atlanta at an Exxon Gas Station. Police told WSB that they responded to the area after receiving a call about a man threatening a woman with a gun.
ATLANTA, GA・13 HOURS AGO
WSB Radio

Police have identified a 15-year-old girl who was shot and killed during a party in Clayton County. On Saturday night, officers responded to a shooting call at a business off Citizens Parkway. Police said they found Laila Harris, 15 of Marietta, dead from a gunshot wound near the front entrance.
CLAYTON COUNTY, GA・1 DAY AGO
WSB Radio

DeKalb police said they need your help in locating a mom and her baby. Police say 15-year-old Junia Mayfield and her one-year-old daughter, Amoni, were last seen leaving their home on Lark Lane in Decatur on Dec. 3. Junia is 5′6, 130 pounds, with black hair. If you see...
DECATUR, GA・6 HOURS AGO
WSB Radio

A teen is dead after they were shot and killed at a party on Saturday night, Clayton County police said. Police said they arrived at an address on the 1000 block of Citizens Parkway in Morrow finding the 15-year-old dead from gunshot wounds. Police said someone who was kicked out...
CLAYTON COUNTY, GA・2 DAYS AGO
WSB Radio

It’s a good way for a local law enforcement agency to get the word out on their Most Wanted suspects - post about it on social media. Turns out in Rockdale County, just checking the comments section can pay-off. “Posted it, and somebody responded, ‘How about me.”. Rockdale...
ROCKDALE COUNTY, GA・21 HOURS AGO
WSB Radio

An investigation is underway after authorities say, a convenience store was selling drugs. Haralson Paulding County drug agents said on Nov. 28, they received an anonymous tip about a store in Haralson County selling pills that contained tianeptine. Since July 1, tianeptine has been described as a Schedule 1 drug...
HARALSON COUNTY, GA・11 HOURS AGO
WSB Radio

Oakwood Police Chief Tim Hatch said Officer Timothy Holbrook has resigned to avoid termination. “We informed the officer that the level of proposed punishment was going to be termination,” said Hatch. The decision to terminate Holbrook’s employment was the result of a takedown body slam of Annie Lloyd. The...
OAKWOOD, GA・9 HOURS AGO
WSB Radio

‘How about me’: Georgia man arrested after asking why he was left off most wanted list

A Georgia man was arrested after wondering on a sheriff’s office social media site why he was not among the county’s most wanted fugitives. Christopher Spaulding is being held on two charges of felony probation violation, WSB-TV reported. His arrest was apparently made easier thanks to a response Spaulding allegedly made on the Facebook page of the Rockdale County Sheriff’s Office earlier this week.
ROCKDALE COUNTY, GA・2 DAYS AGO
WSB Radio

Truck falls over the side of busy Atlanta interstate

CLAYTON COUNTY, Ga — A large truck fell over the side of I-85 southbound near Hartsfield-Jackson International Airport. The truck went over the side of the interstate near the ramp to I-285 eastbound in Clayton County on Saturday afternoon. It’s unclear what caused the incident or if anyone was...
ATLANTA, GA・2 DAYS AGO
WSB Radio

Police now say two teenagers accused of shooting a popular high school football player to death outside a Dave & Busters were looking for someone to rob on the night of the murder. WSB’s Matt Johnson was at the Gwinnett County Jail Friday, where police revealed more details about the...
GWINNETT COUNTY, GA・1 DAY AGO
WSB Radio

ATLANTA — After 47 years, customers and employees are bidding their final farewell to one beloved Kroger location. The Kroger at 3330 Piedmont Road will close its doors for the last time on Dec. 9. The grocery chain store was named the ‘Disco Kroger’ because it was located next...
ATLANTA, GA・1 DAY AGO
WSB Radio

Stetson Bennett racked up another honor on Monday night. After being named a Heisman Trophy finalist, Bennett took home the Burlsworth Trophy, which is given to the top player in the country that began their career as a walk-on. Bennett first arrived at Georgia in 2017 as a walk-on from...
ATLANTA, GA・14 HOURS AGO
WSB Radio

ATHENS — Georgia football “checked the box” on Saturday and is ready for greater heights. There is plenty of video evidence that the No. 1-ranked Bulldogs celebrated their 50-30 win over LSU in the SEC Championship Game in fitting fashion. And, why not?. This “reloaded” Georgia team,...
ATLANTA, GA・1 DAY AGO
WSB Radio

For the third time in program history, Georgia will participate in the College Football Playoff. This time around, Georgia is the No. 1 seed and will play Ohio State. The other matchup will see No. 2 Michigan take on TCU. With Georgia getting the No. 1 seed, the Bulldogs will...
ATLANTA, GA・2 DAYS AGO
WSB Radio

Stetson Bennett has accumulated many different monikers during his time in Athens. Walk-on, back-up, starting quarterback, SEC champion and national champion just to name a few. You can now add Heisman Trophy finalist to the list, as Bennett was one of four finalists for college football’s most prestigious individual award....
ATLANTA, GA・1 DAY AGO