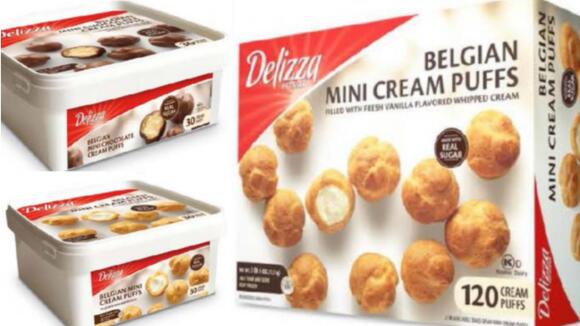 Certain cream puffs made earlier this month are being recalled because of the possibility of metal fragments, the U.S. Food and Drug Administration announced.

In a news release Wednesday, the FDA stated that Poppies International Inc. of Battleboro, North Carolina, is recalling certain cream puffs that were made from Dec. 7 through Dec. 10, 2021, because of the metal fragments.

The issue was discovered during production, the FDA said.

No injuries or incidents have been reported in connection with the items, the agency said.

The FDA said there was concern that consumers may still have unused portions of the cream puffs, since their expiration dates stretch through June 2023.

The products included in the recall were available for sale from Dec. 16 to Dec. 23, 2021, the FDA said. They can be identified by the lot numbers and best-before dates, which can be found on the side of each tub by the lid.

The products were distributed in the following locations:

Consumers who have bought or received any of the products should immediately discontinue use and return it to the place of purchase for a full refund, the FDA said. Consumers with questions may contact the company at info@delizza.us or at 252-428-7118, Monday through Friday between 9 a.m.-5 p.m. EST. More information can be found at www.delizza.us/press.

The Food and Drug Administration is advising restaurants and food retailers not to use frozen oysters from South Korea, after at least one person became ill. The warning covers 13 states, and the agency said the oysters were served from Oct. 28 to Nov. 5. The oysters were harvested on...
LAS VEGAS, NV・1 DAY AGO
WGAU

CHESAPEAKE, Va. — (AP) — The Walmart supervisor who shot and killed six co-workers in Virginia seemed to target people and fired at some victims after they were already hit and appeared to be dead, said a witness who was present when the shooting started. Jessica Wilczewski said...
CHESAPEAKE, VA・2 DAYS AGO
WGAU

NEW YORK — (AP) — Cautious shoppers hunted for the best deals at stores and online as retailers offered new Black Friday discounts to entice consumers eager to start buying holiday gifts but weighed down by inflation. Due to elevated prices for food, rent, gasoline and other essentials,...
MARYLAND STATE・1 DAY AGO
WGAU

Walmart manager kills 6 in Virginia in another mass slaying

CHESAPEAKE, Va. — (AP) — A Walmart manager pulled out a handgun before a routine employee meeting and began firing wildly around the break room of a Virginia store, killing six co-workers in the nation’s second high-profile mass shooting in four days, police and witnesses said. The...
CHESAPEAKE, VA・2 DAYS AGO
WGAU

NEW YORK — (AP) — While Black Friday will mark a return to familiar holiday shopping patterns, uncertainty still remains. The U.S. job market remains strong, consumer spending is resilient and inflation has been slowing. But elevated prices for food, rent, gasoline and other household costs have taken a toll on shoppers.
2 DAYS AGO
WGAU

On the traditional beginning of the holiday shopping season, workers at some Amazon locations are walking off the job to protest for workers’ rights. The strike isn’t limited to Amazon distribution centers in Europe. Several locations in Germany and France saw workers stop their duties as part of the “Make Amazon Pay” movement, Reuters reported.
ALABAMA STATE・1 DAY AGO