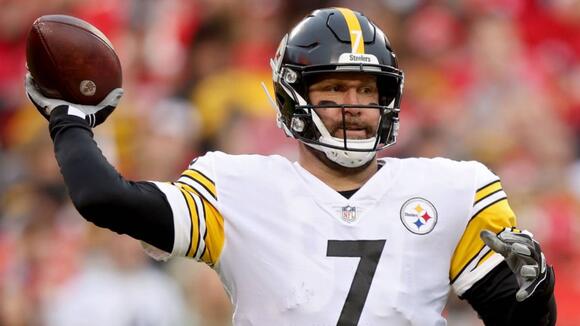 PITTSBURGH — The final bell might be tolling for Big Ben.

During a news conference on Thursday, Pittsburgh quarterback Ben Roethlisberger briefly spoke about retiring after this season but insisted his focus was on the Steelers’ upcoming opponent, the Cleveland Browns, in a Monday night game.

The game, scheduled at Heinz Field, could be the 18-year veteran’s final home appearance. While the Steelers are not eliminated from the AFC playoff picture -- six spots remain to be filled and Pittsburgh (7-7-1) is currently No. 11 -- it would be unlikely that Pittsburgh would host a playoff game even if the team made the postseason.

The Steelers’ opponent, the Cleveland Browns (7-8), also have a shot at the postseason at No. 12.

“Looking at the bigger picture, I would say all signs are pointing to this could be it -- regular season, that is,” Roethlisberger, 39, told reporters during a news conference. “I know we still have a chance to potentially get a playoff game there if things fall our way and we take care of business and things have to happen. In the grand scheme of things, in terms of regular seasons, signs are pointing that way that this could be it.”

Drafted in 2004, the 6-foot, 5-inch, 240-pound quarterback, played his college ball at Miami (Ohio). In his first NFL season, he was third on the depth chart behind starter Tommy Maddox and backup Charlie Batch, WPXI-TV reported.

Batch was injured in the preseason, moving Roethlisberger up to the backup position. He became the starter during the second game of the regular season when Maddox was hurt, the television station reported.

Roethlisberger has been voted to the Pro Bowl six times, won the NFL Rookie of the Year award and has led the NFL in passing yards twice according to WPXI.

The two-time Super Bowl champion has thrown for franchise records of 63,721 yards and 416 touchdown passes during the regular season, according to Pro-Football Reference. He is 13-9 in playoff games and has thrown for 5,757 yards and 34 touchdowns.

Roethlisberger said he does not want any special recognition before Monday’s game, ESPN reported.

“I just want to win the football game,” Roethlisberger, who has a franchise-record 163 wins, told reporters. “That’s all that matters to me. That’s always been my thing. I found out last week I’ve got 91 wins at Heinz Field and broke a tie with Brett Favre for quarterbacks winning in one facility.

“To me, that’ll always mean more than yards and touchdowns and wins. I’m sure you can go back to my very first press conference, all I’ve ever said I wanted to do was win. And that’s what is most important to me. That’s what’s going to be most important. I don’t care if it’s 3-0. I just want to win a football game because it’s so important for our season.”

Kenny Pickett continues to make strides, Steelers hang on to a late win over the Colts

Before Week 1, there was a report that Mike Tomlin didn't want to start rookie first-round quarterback Kenny Pickett all season. Tomlin is probably glad he didn't stick to that. The Pittsburgh Steelers aren't going anywhere this season, but they're learning a lot about their rookie quarterback. Pickett had another...
PITTSBURGH, PA・11 HOURS AGO
WGAU

INDIANAPOLIS — (AP) — Benny Snell Jr. kept waiting for his first carry of the season. When he finally got the chance, in Week 12 during prime time, Snell showed everyone what he could do. He ran for 62 yards, scored the go-ahead touchdown with 9:55 left and...
PITTSBURGH, PA・10 HOURS AGO
WGAU

Apple Podcasts | Spotify | Stitcher | Google Podcasts. Matt Harmon and Andy Behrens spent most of this podcast avoiding talking about what is available on the fantasy football waiver wire heading into week 13 because it is….disgusting. Instead, Andy takes a Josh Jacobs-related victory lap before the guys...
7 HOURS AGO
WGAU

Late in Sunday’s loss to the Philadelphia Eagles, when the Green Bay Packers appeared to have few positives to take away from an embarrassing curb-stomping, a moment of intrigue came from the most unexpected of places. The 2020 NFL draft. Jordan Love, a first-round pick that year who once...
GREEN BAY, WI・11 HOURS AGO
WGAU

It's a must-win week for many of us — not technically the fantasy playoffs just yet, but basically the same experience. Trade deadlines have passed for most of you, which means the only way to improve your roster is via the wire. If you have fantasy needs, we have options. All players discussed below are available in a majority of Yahoo leagues and approved for immediate use.
MINNESOTA STATE・2 HOURS AGO
ESPN

Dallas Cowboys owner Jerry Jones said Odell Beckham Jr.'s recent removal from a flight, during which he was said to be "in and out of consciousness," doesn't change the team's interest in pursuing the free agent wide receiver.
DALLAS, TX・6 MINUTES AGO
Sports Illustrated

The school announced the hiring of their new coach Monday.
OKLAHOMA STATE・8 MINUTES AGO