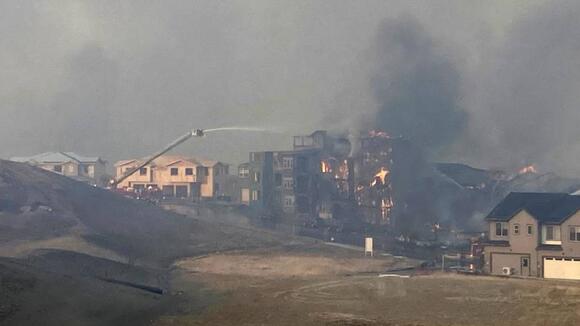 Colorado Gov. Jared Polis declared a state of emergency on Thursday after wildfires in two cities forced more than 30,000 residents to evacuate their homes.

Update 5:30 p.m. EST Dec. 31: President Joe Biden spoke Friday with Polis and “assured him that every effort will be made to provide immediate help to people in the impacted communities,” according to a readout of the call published by The White House.

Officials said FEMA Administrator Deanne Criswell and her team were working Friday with officials in Colorado.

“Fortunately, snowfall will help bring an end to the fires, and recovery efforts can get underway,” White House officials said.

Update 1:45 p.m. EST Dec. 31: At least 500 homes have been destroyed by the wildfires, The Associated Press reported. So far, there are no deaths known.

Boulder County Sheriff Joe Pelle said that one community is nothing but “smoking holes in the ground” but there were no reports of anyone missing.

“It’s unbelievable when you look at the devastation that we don’t have a list of 100 missing persons,” Pelle said Friday.

One first responder and six others have been hurt.

So far the fires that started Thursday have not grown past 9.4 square miles and Pelle said it isn’t expected to spread.

The Denver region has mostly been devoid of snow, with only a small storm on Dec. 10. The area has also had a dry and mild fall with 90% of Boulder county in either severe or extreme drought.

“With any snow on the ground, this absolutely would not have happened in the way that it did,” snow hydrologist Keith Mussleman told the AP.

Original report: The governor issued the declaration after grass fires raged out of control, fanned by high winds, KMGH-TV reported. The fires were ignited when strong winds toppled power lines at about 11 a.m. MST, the television station reported.

The town of Superior and the city of Louisville have been evacuated, KDVR-TV reported.

The National Weather Service said a gust of 105 mph was reported in the Boulder area at around 11:30 a.m. MST.

The agency called it a “life-threatening” situation, adding, “Windy much?”

About 90 minutes later, the Boulder Office of Emergency Management ordered an evacuation notice for Superior, a town east of Boulder with a population of about 12,000 people. At 2 p.m. MST, fire command ordered an evacuation of Louisville’s roughly 20,000 residents, according to The Denver Post.

“Boulder County Office of Emergency Management has just announced an Evacuation Order for all of Superior, Colorado residents,” the town said on Twitter. “Evacuation point is the South Boulder Recreation Center. The Superior Community Center is not an official evacuation location.”

“If you are in Louisville, this is a life-threatening situation. Leave now!” fire officials tweeted.

The fires have resulted in a loss of power for 28,000 customers in the Denver Metro area, with 21,000 in Boulder County.

Colorado wildfires Smoke from a wildfire rises in the background, Thursday, Dec. 30, 2021, in Superior, Colo. All 13,000 residents of the northern Colorado town were ordered to evacuate Thursday because of a wildfire driven by strong winds. (AP Photo/David Zelio) (David Zelio/AP)

BISMARCK, N.D. — (AP) — An attorney for North Dakota asked the state Supreme Court on Tuesday to strike down an injunction blocking the state's abortion ban, saying a lower court judge was wrong to grant it. Matthew Sagsveen, an attorney for the state, told justices that Burleigh...
GEORGIA STATE・5 HOURS AGO
WGAU

PHOENIX — (AP) — Republican officials in a rural Arizona county refused Monday to certify the 2022 election despite no evidence of anything wrong with the count, a decision that was quickly challenged in court by the state's top election official. The refusal to certify by Cochise County...
COCHISE COUNTY, AZ・1 DAY AGO
WGAU

COLUMBUS, Ohio — (AP) — Foes of a proposal that would make it harder for citizens to amend Ohio's constitution vowed Tuesday to unleash the same broad activist coalition against it that delivered a scorching rebuke to a Republican-backed anti-union law last decade. Opponents including the union-backed group...
OHIO STATE・2 HOURS AGO
WGAU

NORFOLK, Va. — (AP) — A Walmart employee who survived last week's mass shooting at a store in Virginia has filed a $50 million lawsuit against the company for allegedly continuing to employ the shooter — a store supervisor — "who had known propensities for violence, threats and strange behavior."
VIRGINIA STATE・5 HOURS AGO
WGAU

BAY CITY, Michigan — (AP) — President Joe Biden reminded Americans he is a “pro-union” president Tuesday as he toured a technology plant to highlight a $300 million expansion, just a day after he sided with business leaders in asking Congress to pass legislation to stave off a crippling rail strike.
MICHIGAN STATE・2 HOURS AGO
WGAU

Suspect in triple homicide in California dead after shooting with deputies

MINNEAPOLIS — (AP) — The Minnesota Court of Appeals ruled Monday that a state board must reconsider its rejection of a substitute teaching license for the former police officer who shot and killed Philando Castile in 2016. Jeronimo Yanez applied to be a substitute teacher in 2020, but...
MINNESOTA STATE・1 DAY AGO
WGAU

Not long after capturing the 2024 spotlight, Ron DeSantis pleaded with his supporters to "chill out." The newly reelected Florida governor has been basking in support from key players in the Republican nomination battle following his nearly 20-point victory over former Gov. Charlie Crist. The following day tipped off a cascade of big-name defections from Trump, from the New York Post calling DeSantis "DeFUTURE" to, most recently, GOP supporter and Twitter CEO Elon Musk dumping Trump for DeSantis.
FLORIDA STATE・6 HOURS AGO
WGAU

The early voting that began Monday continues today and for the rest of the week in Athens and around the state: voters are casting advance ballots at five precincts in Athens-Clarke County for the US Senate runoff that wraps up one week from today. Republican Herschel Walker is trying to knock off Democratic incumbent Raphael Warnock.
STEPHENS COUNTY, GA・14 HOURS AGO
WGAU

Defense: Man had no reason to help family in killings of 8

WAVERLY, Ohio — (AP) — An Ohio man accused of helping his family kill eight members of another family had no reason to take part and wasn't even there, his attorney told trial jurors Tuesday during closing arguments. George Wagner IV, his brother and parents were charged in...
OHIO STATE・6 HOURS AGO