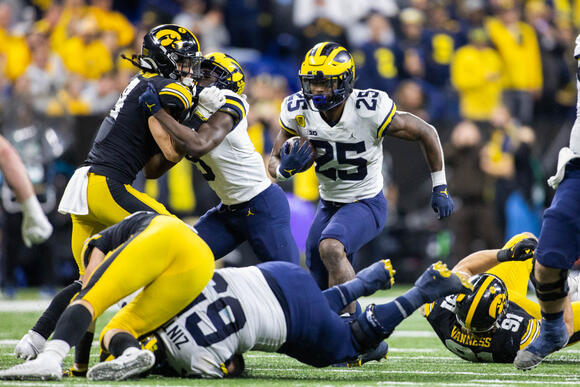 The College Football Playoff semifinals return to Miami where the Georgia Bulldogs and Michigan Wolverines meet for what should be a fabulous game. Michigan proved it could finally get over the hump with Jim Harbaugh after years of frustration in November and December games.

The Maize and Blue haven't won a national title since they were crowned AP champs in 1997. If they're going to play for one this year, they'll have to get through a Bulldogs defense that was easily the most-praised unit in the country this season.

Here’s how our staff at BuckeyesNow expects the game to go down:

Michigan comes into this game with as much belief and momentum as it's had in a very, very long time. Georgia heads to Miami after a huge serving of humble pie when they got blasted by Alabama in the SEC title game.

Michigan is a run first team that has done a good job of mixing in some wrinkles to keep defenses honest. I think they might have trouble establishing a run against a fabulous Georgia defense, but I think they'll strike on a couple of big plays to stay in striking range.

Michigan is certainly capable of winning this game, but ultimately I think Georgia's defense is the difference. They've been too good, too often this year. They are incredibly physical and I have a hard time seeing Hassan Haskins run against the Bulldogs the way he did the last two weeks. But I also never expected him to torch Ohio State's defense, so perhaps we'll be in for a surprise there too. I think the Bulldogs hang on late and have another date with Alabama for the national title.

This game will be won or lost in the trenches when Michigan has the ball, as the Wolverines will either be able to get a push up front against Georgia’s top-ranked defense or be in for a long night.

The Bulldogs didn’t exactly instill confidence in the loss to Alabama, which ended their perfect season, but they’re also built to withstand an attack like they’ll see on Friday night. It’ll be low scoring but never in doubt.

I initially picked this game as a shutout for Georgia but I think that was a little too hyperbolic and in the interest of, well, interest, I'm hoping that my gut feeling is wrong. I don't trust Michigan's offense and I certainly don't think they will be able to do anything against Georgia. I hope I'm wrong...because I'm not sure the world needs another Bama/Georgia matchup. In fact, that's probably the only thing of which I'm certain. Maybe the Wolverines defense keeps them in the game? Maybe? Doubtful.

Tuesday night's College Football Playoff Rankings show on ESPN should have more attention than any of the previous four shows this year for one very specific reason. The Ohio State Buckeyes and Alabama Crimson Tide both have their fate solely in the hands of the national selection committee after each of them are watching two other teams compete for their respective conference championships this weekend. Michigan is playing Purdue in Indianapolis in the Big Ten title game, while Georgia plays LSU in the SEC Championship Saturday in Atlanta.
COLUMBUS, OH・1 DAY AGO
BuckeyesNow

An Autopsy of Ryan Day's Tenure To-Date, Including Two Changes He Must Make

An evaluation of Ohio State's head coach, how he can save his job and what he must do to get the Buckeyes back on track in the rivalry with Michigan.
COLUMBUS, OH・2 DAYS AGO
BuckeyesNow

Ohio State wide receiver Marvin Harrison Jr. was named on Tuesday morning as one of three finalists for the Biletnikoff Award, which is presented annually to the nation’s most outstanding pass-catcher regardless of position. Harrison, a sophomore from Philadelphia, has caught 72 passes for 1,157 yards and 12 touchdowns...
COLUMBUS, OH・1 DAY AGO
BuckeyesNow

Did Ohio State Plan To Run Fake Punt Against Michigan?

The Buckeyes appeared to have a miscommunication on what could have been a game-changing play against the Wolverines.
COLUMBUS, OH・2 DAYS AGO
Fox News

Fox News Digital spoke with supporters of Georgia Senate nominee Herschel Walker, who said he was the candidate in which they could trust their children's future.
GEORGIA STATE・27 MINUTES AGO
BuckeyesNow

Ohio State quarterback C.J. Stroud was named on Wednesday afternoon the Big Ten's Graham-George Offensive Player of the Year and Griese-Brees Quarterback of the Year. A redshirt sophomore from Rancho Cucamonga, Calif., Stroud has completed 66.2 percent of his passes this season for 3,340 yards and 37 touchdowns, which is tied with Houston's Clayton Tune for the most in the country.
COLUMBUS, OH・21 HOURS AGO
BuckeyesNow

As first reported by ESPN’s Pete Thamel, the Rose Bowl signed an agreement on Wednesday night that will allow the College Football Playoff to expand to 12 teams by the 2024 season. Playoff leaders reportedly issued an ultimatum to Rose Bowl officials this week, giving them a Wednesday deadline...
MICHIGAN STATE・11 HOURS AGO
BuckeyesNow

Johnson's resignation was reportedly requested by the board of trustees "following an investigation conducted by an outside firm into concerns about her that were raised by staff."
WISCONSIN STATE・2 DAYS AGO
BuckeyesNow

After a breakout freshman year, Ohio State running back TreVeyon Henderson had high expectations heading into his sophomore season. However, a foot injury suffered in the win over Toledo in September lingered and he ended up missing four of the Buckeyes’ final eight games. That doesn’t include wins at Michigan State and Maryland, when left both games after aggravating the injury around halftime.
COLUMBUS, OH・2 DAYS AGO
Fox News

Jerry Stackhouse had to be held back and escorted off the floor after he was ejected and irate with refs in Vanderbilt's loss to VCU on Wednesday.
NASHVILLE, TN・42 MINUTES AGO
BuckeyesNow

Ohio State quarterback C.J. Stroud was named on Tuesday morning as one of three finalists for the Maxwell Award, which is presented annually to the best player in college football. Stroud, a redshirt sophomore from Rancho Cucamonga, Calif., has thrown for 3,340 yards this season and is tied for the...
COLUMBUS, OH・1 DAY AGO
BuckeyesNow

The Ohio State men’s basketball program is ranked for the first time this season after winning two games at the Maui Invitational last week. The Buckeyes come at No. 25 in the latest Associated Press Top 25 Poll, which was released on Monday afternoon, following a 81-53 blowout of Cincinnati on Tuesday and an 80-73 win over No. 21 Texas Tech on Wednesday.
COLUMBUS, OH・2 DAYS AGO