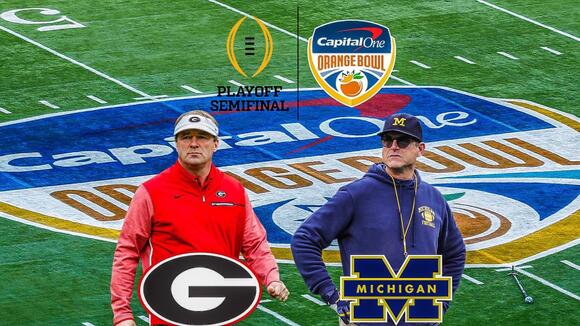 After weeks of talk, the kickoff of this year's 2021 Capital One Orange Bowl is 24 hours away, and with that comes the release of Georgia's weekly game trailer.

As it currently sits, Georgia is favored over Michigan in the 2021 Orange Bowl, one of two College Football Playoff Semifinal games. Georgia will look to secure a win in their second-ever semifinal game in program history, while Michigan is looking for their first.

The winner of the Orange Bowl will advance to Indianapolis and face the winner of Alabama-Cincinnati.

The Orange Bowl matchup could not come at a better time for the Bulldogs as Georgia is finally reaching full strength as the countdown to the Capital One Orange Bowl is just 24 hours away from the 7:30 PM (EST) kickoff time set to be broadcast on ESPN.

Over the last week, we've learned that Georgia will have a number of key contributors back from injury and COVID-19, including former starting quarterback JT Daniels, wide receiver George Pickens, offensive tackle Jamaree Salyer, and safety Christopher Smith.

Jamaree Salyer, Georgia's starter left tackle, is a big get when fully healthy after missing the last four regular-season games with a foot injury. Salyer played well against a tough matchup like Alabama's Will Anderson despite not being fully healthy in Atlanta. Georgia will certainly be happy with a similar performance against the two talented edge rushers for Michigan; Heisman finalist Aidan Hutchinson and David Ojabo look to be one of the best edge-rushing duos in the nation.

Christopher Smith missed the final two games of the season with a knee that's been described as a "bone bruise" before making his return versus Alabama in the SEC Championship game. Smith was a part of the play that saw Jameson Williams take a skinny post route 67-yards for a score due to a Georgia-blown coverage.

Smith and Salyer are proven difference-makers for Georgia and will play a big part in a potential Georgia win.

As for star wide receiver George Pickens, Monken would go on to tell the media Tuesday that Pickens is still developing despite missing the previous two springs due to the outbreak of COVID-19 in 2020, and the most recent setback being his ACL injury in 2021.

Georgia football has landed yet another commitment in the 2023 class in the form of former UCF commit Jamal Meriweather. The Brunswick, Georgia native becomes the latest commit just a day following the Bulldogs landing 5-star edge rusher Samuel M'Pemba.  The 6'7, 285-pound tackle shows a ...
ATHENS, GA・2 DAYS AGO
On3.com

In his first meeting with Colorado’s football team, new head coach Deion Sanders wasted no time telling his players that there would be major changes to the roster in the coming weeks and months. That also extends to the Buffaloes’ recruiting, where CU parted ways with seven of its...
BOULDER, CO・1 DAY AGO
DawgsDaily

BREAKING: Jaxon Smith-Njigba Declares for NFL, Will Not Play vs Georgia

The No. 1 ranked Georgia Bulldogs are set to kick off their College Football Playoff run on December 31st against the No. 4 ranked Ohio State Buckeyes and according to the latest from their star wide receiver's social media feeds, they will be doing so without Jaxon Smith-Njibga.  Arguably the ...
COLUMBUS, OH・2 DAYS AGO
DawgsDaily

Today, the NCAA transfer portal opened. This means that players are allowed to officially enter the portal and announce their destinations. As you could expect, the portal has the front page headlines this morning. This morning, we reported that UGA could recruit the WR position hard through the ...
ATHENS, GA・2 DAYS AGO
The Spun

During this past Saturday's edition of "SEC Nation," former Florida quarterback Tim Tebow shared his thoughts on Auburn hiring Hugh Freeze as its head coach. Tebow believes Freeze makes a lot of sense for Auburn because he won't back down against Alabama. “What’s the most important game for Auburn? Alabama,”...
AUBURN, AL・1 DAY AGO
HBCU Gameday

JT Daniels, Georgia's starting quarterback for a large portion of 2020, is in the Transfer Portal once again.
ATHENS, GA・1 DAY AGO
DawgsDaily

Georgia has sent out another portal offer to yet another wide receiver.
ATHENS, GA・1 DAY AGO
DawgsDaily

Ole Miss head coach Lane Kiffin just tweeted a photo of him and Kirby Smart with a rather interesting caption
ATHENS, GA・2 DAYS AGO
DawgsDaily

The Georgia Bulldogs lost in heartbreaking fashion to in-state rival Georgia Tech. They are now 0-2 on the season vs the ACC.
ATLANTA, GA・1 DAY AGO
DawgsDaily

Georgia quarterback and former walk on Stetson Bennett has been named one of four finalists invited to New York for the Heisman ceremony. He joins USC QB Caleb Williams, TCU QB Max Duggan, and Ohio State QB CJ Stroud in New York.  Yes, you read that correctly. Stetson Bennett has a chance to ...
ATHENS, GA・2 DAYS AGO
DawgsDaily

Georgia wideout Ladd McConkey left the SEC Championship after suffering a knee injury in the 2nd quarter. Here is what we know so far.
ATHENS, GA・2 DAYS AGO
DawgsDaily

For one of the more storied programs in college football, Georgia's Heisman-history is relatively light. Stetson Bennett is the first Georgia finalist in three decades.
ATHENS, GA・2 DAYS AGO
DawgsDaily

The transfer portal opened up on Dec. 5 and the Georgia Bulldogs officially had their first player enter their name into the mix. Defensive lineman Bill Norton from the 2019 recruiting class is now searching for a new program.  Norton out of high school was listed as a four-star recruit and is ...
ATHENS, GA・13 HOURS AGO
DawgsDaily

Every team sets out with at least one primary mission to start the beginning of the season... win your conference. If you've managed to place yourself in Atlanta, for the SEC Championship game, history says more often than not, if you win, your future is still very much so ahead of you. With ...
ATHENS, GA・2 DAYS AGO
DawgsDaily

Portal Open: How UGA Could Utilize the Transfer Portal

The transfer portal is officially open. Here are some positions UGA could look to the portal to improve.
ATHENS, GA・2 DAYS AGO
DawgsDaily

Stetson Bennett Goes to Bat for His Offensive Line

The two finalists for the Joe Moore award have been announced and Georgia's unit made the final cut along with Michigan's. The Wolverines have a chance to take home the award for the second year in a row, but Georgia has a strong case for themselves as well.  This season, Georgia's offensive ...
ATHENS, GA・6 HOURS AGO
DawgsDaily

Two days after Georgia defeated LSU 50-30 in the SEC Championship, the Bulldogs landed 5 players on the AP's First Team All-SEC Team, 4 on the Second Team.
ATHENS, GA・2 DAYS AGO