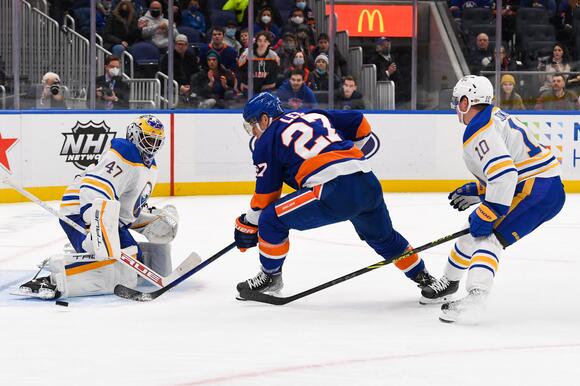 For the first time in 2021-22, the Buffalo Sabres met the New York Islanders. Much like 2020-21, it was the Islanders terrorizing the Sabres in all facets of the game. Tonight inside UBS Arena in Belmont Park, the home team cruised to a 4-1 victory.

The game stayed tied into the middle stanza before the Islanders pulled ahead. Thanks to goals from forward Kieffer Bellows and captain Anders Lee on a powerplay, the home team carried a 3-1 edge into the third period of play.

The Islanders added a fourth goal in the third period to put a bow on a workmanlike 4-1 victory over the Sabres. Scoring in the final frame for New York was defenseman Noah Dobson.

The loss was the second in as many nights for the Sabres.

What's Next:
The blue and gold head to Boston, Massachusetts to take on the Bruins on New Year's Day. Puck drop inside TD Garden is set for 1 p.m. EST and the Paul William Beltz Pregame Show with Brian Koziol starts at 12 p.m. EST on the radio home of the Buffalo Sabres - WGR Sports Radio 550.

The Buffalo Sabres will close out their three-game homestand by welcoming the Tampa Bay Lightning to KeyBank Center for the first time this season. Pat Malacaro has his game preview:
BUFFALO, NY・1 DAY AGO
WGR550

Defense may be young, but don't call them inexperienced

Not only does the young Buffalo Sabres defensive corps have so much promise, but we are already seeing results on a nightly basis. That has been on display throughout the first quarter of this season. Pat Malacaro has more:
BUFFALO, NY・15 HOURS AGO
WGR550

Granato: We are still a rapidly evolving team

Buffalo Sabres head coach Don Granato joins the Howard and Jeremy Show for his weekly appearance on WGR after the Sabres fall to the Tampa Bay Lighting in Overtime.
BUFFALO, NY・2 HOURS AGO
WGR550

Sabres struck down by Lightning in overtime

The Tampa Bay Lightning come back from a late two-goal deficit against the Buffalo Sabres to force overtime, and eventually win it 6-5 at KeyBank Center. Jonathan Koziol has a complete game recap:
BUFFALO, NY・16 HOURS AGO