Normani Brings Ciara To Tears While Thanking Her For Being A Role Model: ‘You’re Somebody That I’ve Looked Up To Forever’ 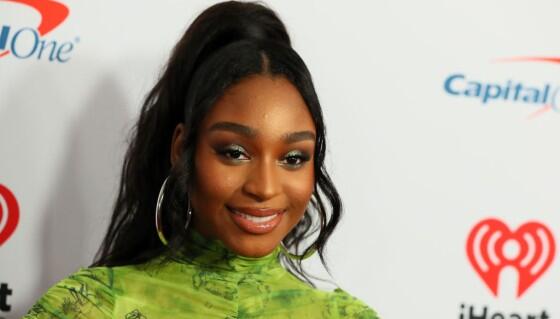 Normani is publicly giving Ciara her flowers and we love to see it!

During a recent appearance on The Ellen DeGeneres Show , the 25-year-old singer sat down with guest host, Ciara, and things got pretty emotional after Normani told the “Level Up” artist that she’s “someone she’s looked up to forever.”

“I’ve always felt like representation was so key, and being a little girl in my grandmother’s living room learning the ‘1, 2 Step’ and ‘Goodies.’ Literally, the earliest memories that I have, you were a part of that,” Normani explained to the 36-year-old Grammy Award-winning artist.

She continued, “You really helped shape the artist and the woman that I felt like I could be,” adding, “you really opened my mind to those possibilities. Like, Black Girl Magic.” Normani ended her praise by telling Ciara, “I love you.”

Getting visibly emotional, Ciara responded, “Don’t make me cry!” while wiping away tears. “That is so awesome. Thank you. That means a lot. Sorry guys, I got a little emotional.”

Check out the heartfelt moment below.

This isn’t the first time Normani has publicly praised Ciara for being such a huge inspiration to her career. Earlier this year during the 2021 Soul Train Awards, the “Wild Side” singer accepted the award for Best Dance Performance and thanked Ciara for paving the way for her to even have the opportunity to win such an award. “I was a black girl in my grandmother’s living room, studying Ciara, studying the greats. Michael Jackson. Janet. Bey. Ashanti. And it’s just women like that that have paved the way for me to even have the opportunity to stand here in front of you guys,” she told the audience.

Check out the acceptance speech below.

Cardi B reportedly went under the needle in September.
20 DAYS AGO
HelloBeautiful

Saweetie Shows Off Her Finger Waves And We’re Loving It

Saweetie took to Instagram to show off her latest finger wave hair style and we're swooning!
16 DAYS AGO
HelloBeautiful

Tia Mowry took to Instagram to share how she's teaching her daughter self love.
8 DAYS AGO
HelloBeautiful

Kelly Rowland Shines In An All White Look

Kelly Rowland was spotted making a press appearance in an all white look that we love!
15 DAYS AGO
HelloBeautiful

The Emmy-Award-winning actress stays clear of her comment section to maintain her peace.
14 DAYS AGO
HelloBeautiful

Nene Leakes Shined In A $2,550 Chain Dress For Porsha’s Wedding

Now THIS is how you snatch edges.
20 DAYS AGO
HelloBeautiful

The Best Looks From Porsha And Simon’s Star-Studded Wedding

Porsha Williams and Simon Guobadia tied the knot in style over the weekend.
9 DAYS AGO
Aabha Gopan

A mother-of-five is going blind after tattooing her eyeballs blue and purple despite her seven-year-old daughter’s warnings. Anaya Peterson, a law student from Belfast, got her eyeballs tattooed blue and purple after she was inspired by the Australian model Amber Luke, who is also nicknamed the ‘blue-eyed dragon’. Amber Luke, the Australian model, had spoken about inking her eyeballs and highly recommended people research the topic before going forward with it.
1 DAY AGO
Anita Durairaj

In 1968, a white woman made a friendly gesture to a black man on prime time TV and it became a scandal

Tracee Ellis Ross Dances For The ‘Gram In A Loewe Look

Tracee Ellis Ross took to Instagram to serve a look in a sexy Loewe ensemble.
21 DAYS AGO
HelloBeautiful

Xscape shows off their killer style during their Soul Train Awards performance.
11 DAYS AGO
HelloBeautiful

Cardi B Got Cozy In Chanel Over Thanksgiving

Cardi B was spotted on Instagram in Chanel over Thanksgiving.
13 DAYS AGO
Maya Devi

A white glamor model who underwent a series of tanning injections now claims she has ‘changed race’ and will give birth to babies that are ‘black’. Martina Big, a 30-year-old German model who has been receiving melanin injections for two years, claimed while making an appearance with her new husband, Michael, on a TV show, that she will give birth to black babies. But she has revealed that they are not planning to have a baby.
2 DAYS AGO
HelloBeautiful

Ciara was spotted on social media participating in the latest TikTok challenge and we love it!
15 DAYS AGO
HelloBeautiful

Steve Harvey's style is everything and the comedian took to Instagram recently to show off his latest drip.
17 DAYS AGO
HelloBeautiful

Ciara took to Instagram to wish her husband Russell Wilson happy birthday in the sweetest way.
9 DAYS AGO
HelloBeautiful

August Alsina Confuses Fans, Seemingly Comes Out, But Maybe Not?

Singer August Alsina is making headlines after seemingly coming out on the VH1 show "Surreal Life."
17 DAYS AGO
HelloBeautiful

Angela Simmons took to Instagram to give us style goals in a black Dolce & Gabbana dress that we love.
13 DAYS AGO