Detroit police: officers shoot man who was rolling a joint in gas station, pulled out a gun 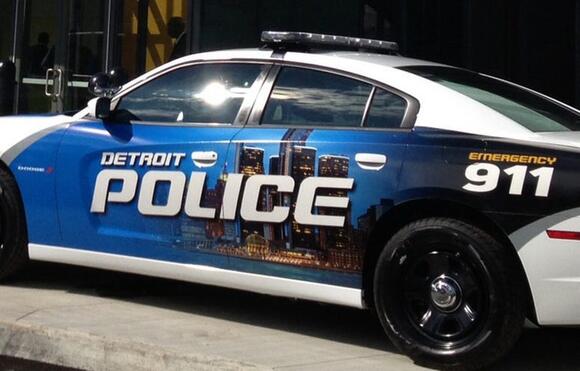 DETROIT (WWJ) – A suspect is in temporary serious condition after an officer-involved shooting on Detroit’s east side Thursday night.

Assistant Detroit Police Chief David LeValley says around 7 p.m. two officers in the 9th Precinct walked into a BP gas station in the 9400 block of Conner Street, near Harper Avenue and had a conversation with the clerk.

While the officers were inside the gas station, they noticed a man who “engaging in suspicious behavior” and trying to avoid contact with the officers.

The officers allegedly noticed the man was rolling a marijuana joint and went over to talk with him, LeValley said. As they were speaking to the 31-year-old suspect, they found out he was armed with a handgun and the suspect tried to flee.

LeValley says an officer grabbed the suspect, but when he broke free for a second time, he pulled out a gun and officers shot him multiple times. He believed the two officers fired a total of seven shots.

The suspect was taken to a hospital and was listed in temporary serious condition. LeValley said the suspect was alert and talking with officers.

No one else was injured in the incident.

LeValley said the officers were not called to the gas station, but were making a routine stop and talking with the clerk.

He said it was “not normal” for someone to be rolling a joint in the gas station.

“Possession is legal, but I don’t think you can just roll a joint inside a gas station. You have to do it in a certain manner,” LeValley said during a news briefing Thursday night.

This was at least the third officer-involved shooting this month. A woman was fatally shot after pointing what turned out to be a fake gun at people at a gas station on Dec. 19. Earlier this week police shot and killed Dwayne McDonald, who was accused of killing his wife and her 13-year-old daughter on Christmas on Detroit’s west side.

LeValley said he’s not sure why there have been so many shootings in recent weeks.

“I don’t know what motivates individuals to do what they do, but we do see a lot more firearms out on the streets than we ever have in the past, so officers are forced to deal with that,” he said. “When you run into a lot of individuals that are armed, some of them make decisions to try to fight with the officers, to pull the guns out, point them at people, point them at police officers, fire at police officers, rather than be taken into custody.”

CORRECTION: " Marijuana POSSESSION is legal, but YOU DON'T GET TO PULL OUT A GUN ON THE COPS".... BOY oh BOY, try thinking before you author stuff.

That's the thing with weed being "legal" now everyone thinks it's a free for all and you can smoke weed anywhere while sound anything.

The reason police shoot people multiple times is because 9 mm has no stopping power, police miss their 357magnums

The search is on for three suspects who were caught on video opening fire on a Jeep in a Detroit convenience store parking lot Tuesday night near Warren and Outer Drive.
DETROIT, MI・11 HOURS AGO
WWJ News Radio

A man who Detroit police say shot someone in Greektown last month over an elevator dispute has been arrested in Ohio. The man will be extradited to Michigan to face formal charges.
DETROIT, MI・1 DAY AGO
WWJ News Radio

Suspect wanted for carjacking, robbery tried to flee police at speeds of 120 mph, before wrecking in Detroit, MSP says [VIDEO]

A suspect wanted for auto theft is behind bars for a string of alleged crimes, including robbing a Dunkin Donuts and leading troopers on a dangerous high speed chase from Southfield to Detroit, state police said.
DETROIT, MI・1 DAY AGO
WWJ News Radio

Brazen suspects who drifted, did donuts in front of law enforcement sought by Detroit police

Officers with the Detroit Police Department are searching for suspects who brazenly drifted and did donuts in front of officers at an intersection over the weekend.
DETROIT, MI・1 DAY AGO
WWJ News Radio

A young child is dead after state police said a box truck rear-ended a passenger vehicle that was attempting to get off the Southfield Freeway due to a blown tire on Tuesday evening.
SOUTHFIELD, MI・18 HOURS AGO
WWJ News Radio

No arrests made after gunfire erupts at Livonia Taco Bell

A 35-year-old Dearborn man charged with ethnic intimidation after an anti-Semitic rant outside Temple Beth El in Bloomfield Township last week had his bond revoked on Tuesday in a separate case after an outburst in an Oakland County courtroom.
OAKLAND COUNTY, MI・19 HOURS AGO
WWJ News Radio

The search is on for a man and woman who are considered to be armed and dangerous after carjacking a 19-year-old man on Detroit’s east side last month.
DETROIT, MI・2 DAYS AGO
WWJ News Radio

A Utica man is behind bars after a drunken crash along the Lodge Freeway in Detroit Monday night left a 45-year-old woman in critical condition.
DETROIT, MI・1 DAY AGO
WWJ News Radio

Detroit Police are looking for a female suspect who allegedly shot and killed another woman and injured her boyfriend after an argument Sunday night.
DETROIT, MI・2 DAYS AGO
WWJ News Radio

A Southfield man is dead after police said he was struck and killed by a driver who believed they had hit a dear early Sunday morning. Southfield police said they were called out to Telegraph Road just north of 10 Mile around 1:30 a.m. on Dec. 4
SOUTHFIELD, MI・1 DAY AGO
WWJ News Radio

Southfield police chase and shootout ends in 2 arrested, 1 at large

Two suspects are in custody – with one person still on the loose – after engaging Southfield Police in a car chase and shootout Monday morning.
SOUTHFIELD, MI・2 DAYS AGO
WWJ News Radio

The Southfield Freeway is closed on Detroit’s northwest side as Michigan State Police investigate a felonious assault Monday afternoon. Authorities have not released any details about the incident, but Metro Detroit drivers are dealing with backups.
DETROIT, MI・2 DAYS AGO
WWJ News Radio

Detroit police are searching for a man who stole an 84-year-old man’s car on the city’s west side over the weekend. Police released two photos of the suspect on Monday.
DETROIT, MI・2 DAYS AGO
WWJ News Radio

A 14-year-old boy was arrested by Michigan State Police in Hazel Park after troopers found a gun on him. Police said the teen approached a trooper as he was waiting for a bus.
HAZEL PARK, MI・2 DAYS AGO
WWJ News Radio

An investigation is underway and a family wants answers after an SUV had its tires and rims stolen from a parking garage at Detroit Metro Airport last month.
DETROIT, MI・2 DAYS AGO
WWJ News Radio

A man who was allegedly trying to break into a home on Detroit’s west side over the weekend has been shot and killed. The case is still under investigation.
DETROIT, MI・3 DAYS AGO
WWJ News Radio

Police were called to a home on Columbia Avenue in Pontiac shortly before 4:30 a.m. Sunday on the report of shots fired, and found a 22-year-old woman dead on the sidewalk.
PONTIAC, MI・3 DAYS AGO